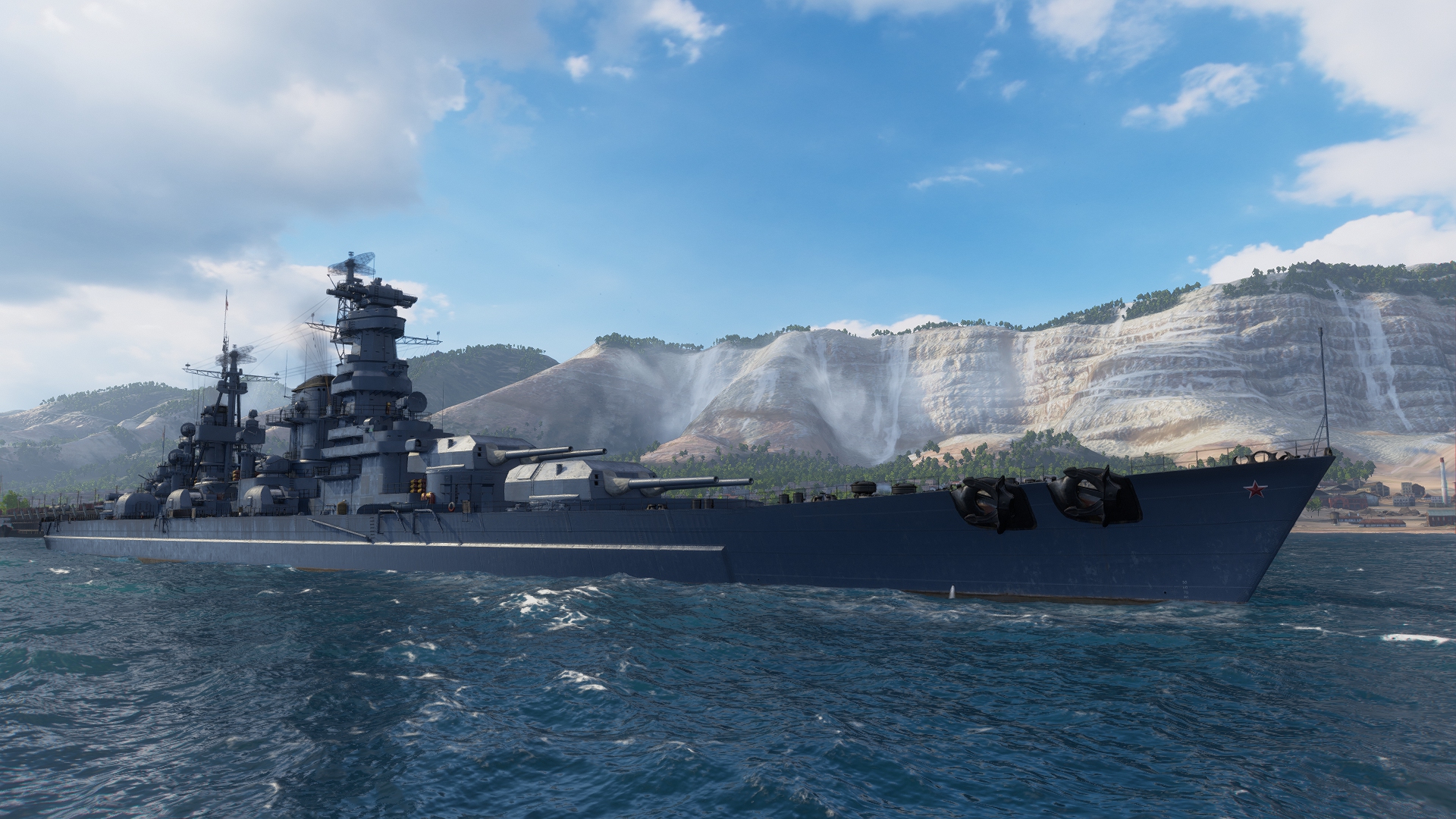 Komrads! Exactly 9 months ago after the ship was announced, she is finally getting released! Sevastopol which went missing for a few months because of… *cough* certain geopolitical events happening somewhere East of Europe is now finally coming. The ship will be available with the release of Update 0.11.7 for 58 000 Research Points.

Is the ship worth it? Is she a functional hybrid between Siegfried and Kronshtadt? Here is my opinion.

Sevastopol was the second ship of the Kronshtadt-class of battlecruisers from the Soviet Union.

Initially, the Kronshtadt-class (Project 69) was meant to be built with three triple 305 mm turrets with two superfiring at the front and one at the rear. The problem is that the 305 mm turrets were well behind schedule while the hulls were already under construction. As an emergency solution, the Soviets bought surplus 380 mm guns and turrets from the Germans. This modified design was called Project 69-I.
Modifications obviously had to be made on the hulls that were already under construction.

Sadly, with uncle Adolf starting Operation Barbarossa and as such, declaring war on the USSR, the turrets and guns were never delivered. The hull of both ships, completed at around 10% survived the war in relatively good shape and while there were considerations to complete them as aircraft carriers, the plans never went through. The hulls were scrapped in 1947.

In World of Warships, Sevastopol appears as she should have been completed with the modified design (Project 69-I). However, Wargaming also gave her a hypothetical Cold War modernization with modern 100 mm dual-purpose secondaries as well as twin 57 mm AA mounts from the 1960s.
She is equipped with a short-duration 20% Engine Boost as well as a special Repair Party that lasts for 90 seconds but with a very long cooldown. She also gets slightly improved AP penetration angles and fuse timer. The permanent camouflage of the Sevastopol comes with the standard permanent tier X economy bonuses:

Sevastopol is a particularly gimmicky ship with a set of consumables that is as awkward as you can get and with one of the worst large cruiser hulls that exists in this game. That’s for the short version.

When it comes to consumables, we already have problems there. Firstly, she is using a Fast Damage Control Team instead of a standard Damage Control Party. This means that you must be particularly careful with what you are using it on as she only gets 4 charges. As you might guess, combined with the 60 seconds of fire duration due to her battlecruiser nature, HE spam is something she particularly dislikes.
The Repair Party isn’t really helping either. It is a very strange repair party, able to recover 75% of normal penetration damage and 50% of citadel damage while lasting for a whole 90 seconds. However, it also has a 180 seconds downtime. Three whole minutes during which the ship will be completely naked. Not only is the cooldown particularly problematic, but you will also rarely get to recover all the HP one of the Repair Party charges can grant you compared to standard ones. Also, it is merely lasting for so long to compensate for the truckload of damage this ship will take due to her massive size and lack of armor.
Finally, she has a strange 20% Engine Boost that only lasts for 45 seconds, reducing heavily its usage to just quickly reaching a flank/specific position, disengaging, or rushing a target. Considering that you only have up to five charges, you will need to use them wisely.

Other than her weird set of consumables, Sevastopol doesn’t have much to offer honestly. Due to her armor profile and over-reliance on AP shells, you will mostly try to go for flanking actions and get the broadside of targets while trying to maintain a low profile. Except when your battleships don’t want to push because they are too scared of losing HP while they are still at 100%, avoid being the spearhead of aggressive action. The ship just doesn’t handle focus fire well and the moment the Repair Party will be on cooldown, you will quickly go down.

If you want to see the ship in action, here is a commented gameplay of one of my games: The main battery of Sevastopol lives and dies depending on the amount of broadside you can catch.
Let’s get the HE out of the way first by saying that it’s mediocre at best. While it doesn’t suffer from the reduced damage you get with Siegfried, the damage output is still less than acceptable and the fire chance remains low for that caliber. This leads to Sevastopol dealing rather poorly with angled targets as well as destroyers, especially coupled with her long main battery reload time.

The AP will be the bread and butter of the ship. Compared to Siegfried’s 380 mm AP shells, Sevastopol gets improved penetration angles similar to those of Petropavlovsk. She also gets reduced arming time to increase the chances of shells dealing penetration damage instead of overpenetration. Finally, in true Soviet fashion, she gets a lower air drag, leading to better ballistics and better penetration.

While all of this seems great, you need to keep in mind that the penetration angles are only improved by 5° so it will not have as much impact as one would like. Obviously, that AP will definitely slap hard when finding broadside targets but at the end of the day, unless it’s cruisers that you can get citadels on, the actual damage will be somewhat underwhelming.

Another issue with Sevastopol’s guns is that you only have six of them. While it would seem fine considering the cruiser dispersion, things aren’t as good as they would seem to be. The problem is that due to the high shell velocity, the ship suffers from poor vertical dispersion, and as such, on numerous occasions, you will get shells landing either too short or behind the target.

In the end, that main battery is all about the paid actors you might face and even then, you will heavily rely on getting citadel hits on cruisers to deal meaningful damage. Well… 100 mm secondaries with standard dispersion are about as useless as you can get. Even against destroyers, you will not get any sort of meaningful damage. The anti-air of Sevastopol is terrible.  In terms of DPS, both auras are decent but not much more. The problem is that all the anti-air depends on a grand total of 14 mounts, secondaries included and I can tell you… keeping them functional is a challenge, to say the least.

The moment you start taking a bit of HE damage, you can expect to lose at least a third of your mid-range DPS. As for the rest, it won’t take long before it also dies. This ship is honestly free food for a carrier.

The armor of Sevastopol isn’t particularly good. While she gets a huge main belt to tank AP when angled. The problem is that the citadel is equally huge, extending well beyond the turrets at the front and the rear. Because of this, the ship is rather merciless with the way you angle. There is one “safety net” for shells coming from long range as the ship has a 90 mm armored deck right above the citadel, protecting it to some extent. The more I played this ship, the more I grew to dislike it.  It is just full of weird gimmicks packed on a suboptimal hull that ends up being some sort of unholy mix between Kronshtadt and Siegfried but without the utility of the former and the tanking capacity of the latter.

There is basically no reason to grab Sevastopol other than for pure collection purposes. Siegfried is a more interesting ship within the Research Bureau and if you want a Soviet cruiser, Moskva and Stalingrad are here.

For the Sevastopol, I recommend the following commander build and upgrades: If you decide to get the ship, I heavily recommend using the unique commander Kuznetsov for his Will to Victory.

This concludes my review of Sevastopol. Thank you for reading this article!