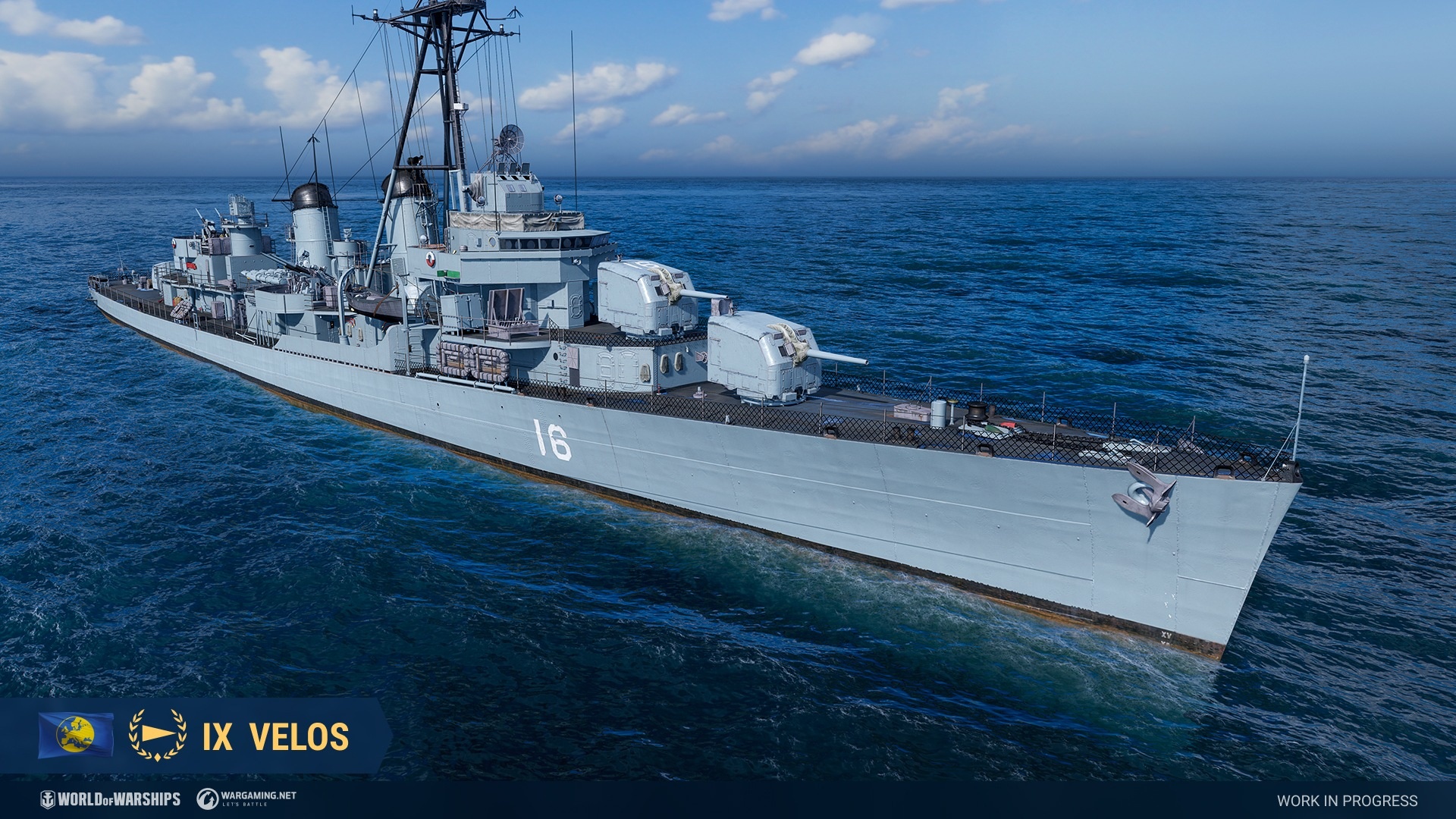 Velos started life as USS Charrette, one of the many Fletcher-class destroyers of the U.S. Navy. The ship was laid down in February 1942, launched in June 1942, and commissioned in May 1943.

After her commissioning, the ship was deployed in the Pacific and spent the major part of the conflict on screening duty for carriers and battleships. She also took part in a few raids to sink Japanese ships, mostly convoys or small combat units. After the war, the ship was placed in reserves and later on decommissioned in January 1947.

In June 1959, the ship was transferred to Greece and renamed Velos. She took part in almost all Greek and NATO exercises and was also deployed during various crises with Turkey.

Velos/Charrette’s most notable action wouldn’t be an act of war but instead, an act of mutiny. In May 1973, under the command of Nikolaos Pappas, the ship that was taking part in a NATO exercise anchored at Fiumicino in Italy. The captain and his crew refused to return to Greece as a form of protest against the dictatorship of the Junta and a press conference was organized to reveal the horrors of the regime. While the captain, six officers, and twenty-five petty officers remained in Italy as political refugees, the rest of the crew were advised (to not say ordered) to stay on board the ship and later return to Greece in fear of retaliation against their families. A month later, the ship returned to Greece with a replacement crew.

After the fall of the Junta in July 1974, some of the officers returned to the navy. Commander Pappas reached the rank of Vice-admiral and served as the chief of the Hellenic Navy General Staff from 1982 to 1986.

Velos was decommissioned in February 1991 and in 1997,  the Hellenic Navy General Staff declared her a Museum of the Struggle against the Dictatorship. The ship changed locations a few times but since September 2019, she is anchored on the waterfront of Thessaloniki.

In World of Warships, Velos appears as she was in Greek service. She is very similar to the classic U.S. destroyers in terms of characteristics but gets a shorter main battery reload time and the Engine Boost and Defensive AA Fire consumables are in separated slots. As of right now, Velos looks alright. In terms of DPM, she is definitely a solid gunboat with high DPM and either the advantage of having the U.S. smoke to rain down shells from safety or a nimble hull with good top speed and tight turning radius.

While she is stuck with only one torpedo launcher, it reloads particularly fast so, in the end, her torpedo armament can’t be called weak either.

As an added bonus, the ship is also quite stealthy allowing her to have the surprise element on her side in a few situations.