As announced earlier, Wargaming has finally unveiled some information of what is planned to come with it’s called New Balance Update, or as some are calling it World of Tanks Balance 3.0, and released the Sandbox server for you to test these changes. The reason why I say some information, is because there are still a few details of what will happen with the new balance that isn’t clear. Still, there is a lot of information to go through, so I will try to break it into parts, but this initial post will be basically the same information Wargaming is sharing. If you haven’t read it yet, here’s all we know so far from Wargaming.

Initially, all the proposed changes were conceived as a system of shell rebalancing where we wanted to align the efficiency ratio between standard and special rounds. There have always been three types of shells in our game, but one of them has always been an unconditional favourite in terms of efficiency—the special (or gold) shell. It is available to everyone for credits, it deals the same damage as the standard one, but its armour penetration values ​​are much higher. This means that it has always been more effective because the chance of causing damage when using it is higher. This is a shell that has no disadvantages in battle.

Given that the special shells had higher penetration values, other things being equal, their use was more effective in all combat situations. The only downside was the price. Therefore, in the new system, our main task is to reduce the effectiveness of special shells and increase it in standard ones so that, in different game situations, both types of rounds have their advantages.

Over time, it has become clear that new approaches and a consistent system are required, which includes other game-related aspects besides shells, so we started working on those concepts. In this new system, all shells will be more balanced, and each of them will have their own specific role.

So, when should players use each type of shell?

Changes to HE Shells

HE shells are an integral part of the existing ecosystem of shells in World of Tanks. Their main feature, which differs from other types of rounds, is their unique mechanic for causing damage. When rebalancing standard and special rounds, we also needed to rework HE shells. We wanted these shells to be effective in some specific tactical situations mentioned above.

In the new system, these shells became more effective on calibres less than 120 mm and lost effectiveness on calibres above 150 mm. It is also important that the mechanics of causing explosive damage have been improved, making it more predictable for both the vehicles doing the firing and those being hit.

For tanks that use HE shells as a fundamental element of gameplay, we tried to adjust their shell characteristics in the new system in such a way as to maintain the same average efficiency. Almost all High-Explosive and HESH shells with the new mechanics cannot penetrate armour. HE shells, which in the old system differed from others due to their higher penetration values, now do more damage as compensation. The only exceptions are the KV-2 and KV-2 (R), which still retain the ability to penetrate armour with HE rounds.

Artillery as an Essential Part of the World of Tanks Ecosystem

Artillery is also an essential part of the game ecosystem, but due to their radically different gameplay, all changes for SPGs are of a different nature. We do not want to change the effectiveness of artillery in terms of damage, but instead change the approach to its gameplay and make changes similar in logic to those mentioned above regarding shell rebalancing.

As a consistent part of these changes, new types of rounds will be added to the arsenal of SPGs in order to:

Standard High-Explosive. They are still able to stun the enemy and remain unchanged.

During previous iterations, we changed the shell paradigm and redesigned special and explosive rounds. In addition to rebalancing shells, we also adjusted the HP of all vehicles to increase their average lifespan. We added extra HP to all tanks from Tiers I–VI and thereby aligned the progression on HP from tier to tier. These tanks now have greater survivability, and the cost of making a mistake has been reduced.

We are almost done with the balance changes, and feedback from players who have played on the Sandbox open server shows that we are moving in the right direction. As a result, each of the three types of shells is suitable for different game situations.

This February’s tests will be the final and most extensive iteration, where all previous and future changes in New Balance will be put together like building blocks. All changes announced before are saved, and new features will also be added. You will be able to evaluate the changes that New Balance will bring from all sides.

This is one of the main changes that New Balance will bring. We all know that some nations’ tech trees are large and often confusing, with complex and unclear transitions. This is especially true of the main nations: the United States, Germany, and the USSR. They can be difficult for players to navigate and calculate their optimal research path, so we want to visually update them.

To do this, we are proposing a number of UX changes, including:

See for yourself how easy it will be to navigate through the research branches after all these changes are put in place.

To simplify the research branches, we had to relocate 92 vehicles from the Tech Trees.

Tanks from Tiers I–V will be added to the separate “Collection vehicles” tab in the in-game shop. These tanks will not be removed from the game, but simply be relocated to the new tab and divided by nation. You can reach it in two ways: from the in-game shop or from the research tree. To get access to collectable vehicles of a specific nation, you need to research at least one of its Tier VI tanks. 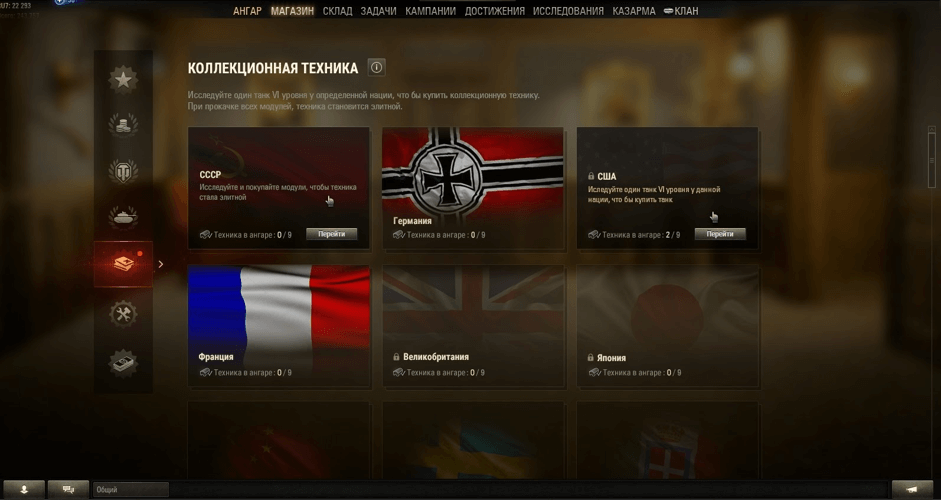 To research collectable vehicles, you only need credits—XP will not be required. The stock versions of all tanks will be available, so after purchasing them you can start upgrading their modules, just like regular vehicles. The collectable vehicle will be no different from its previous version, except that it will be sold in the shop.

Vehicles from Tiers VI–X will not leave the game—you will still be able to get them in the future, and we will get into all the details regarding this at a later date. If you have any of these vehicles in your Garage, they will remain there. Moreover, they will go into the promotional category, and you will have the opportunity to get a tank in the top configuration, even if you haven’t researched a single module.

If a vehicle that you have already researched and purchased is removed from the tech tree, the next tank or tanks located higher in the research branch will automatically be unlocked.

Not all related features will be tested on the test server, but we would like to share some information on how these features will change if New Balance is successfully tested.

When changing basic game aspects such as damage or tank HP, the current statistics associated with these parameters may become irrelevant. However, this does not mean that all your lifetime statistical data will be lost—they will continue to be updated even after the release of New Balance.

At the same time, we aim to introduce a new section with “current” statistics over a certain period (for example, 3 months). At the end of this period, a new one with the same duration will be launched. Currently, the duration of this period is still under consideration.

New statistics will allow you to properly track your progress in changing conditions.

All these changes will affect Personal Missions in both campaigns. We aim to adjust their conditions to provide you with the best possible gameplay experience after the release of New Balance, so certain missions may need to be suspended temporarily.

The battle economy, which directly depends on vehicle damage parameters and HP, will also be adjusted. In a nutshell, all changes will be proportional to the game balance changes, but the profitability of battles will remain the same or increase. We want to maintain your current credit-earning rates and experience indicators, adjusting the economy parameters so that players with the same level of combat effectiveness can continue to earn as much as before.

Rewards for Participating in Testing

We are grateful to everyone who participated in previous Sandbox iterations and gave their feedback. Now it’s time to conduct the most extensive and critical tests to make the final decision on the implementation of all the announced changes.

The long-term impact and significant effects of these tests on the game mean that your involvement as a World of Tanks player is absolutely critical. The more commanders who test New Balance and give their feedback, the better the outcome of these tests will be. This is the final iteration of tests, and if the results are positive, we aim to implement all of these changes in the game.

Given the highest importance of these tests, we would like to reward all participating testers as a sign of our appreciation for their contribution to New Balance.

Special combat missions with rewards will be available during the New Balance tests. To receive these rewards, simply fulfil the conditions of the missions and answer a special questionnaire which will be sent out via the in-game client after February 19. As soon as you have answered all the questions, you will be credited with all the rewards for the completed missions.

The New Balance tests begin on February 10 and will last approximately 10 days. We will also move all testers’ contents and account statuses to the New Balance server to simplify testing changes and track their impact on specific tanks.