Update 0.7.10 is now live across all regions and Halloween has officially arrived in World of Warships. Quite a lot of new content was introduced with the latest update, so here is a resume of what you can expect.

The British Arc frenzy gains momentum in World of Warships as Update 0.7.10 brings in a complete tech tree of U.K. destroyers. These ships all come with a feature to boast: the ability to fire torpedoes individually, one at a time; unique smoke screens; and the Hydroacoustic Search and Repair Party consumables for high tiers. More details about the new ships and the equipment they carry will be available in a dedicated article. 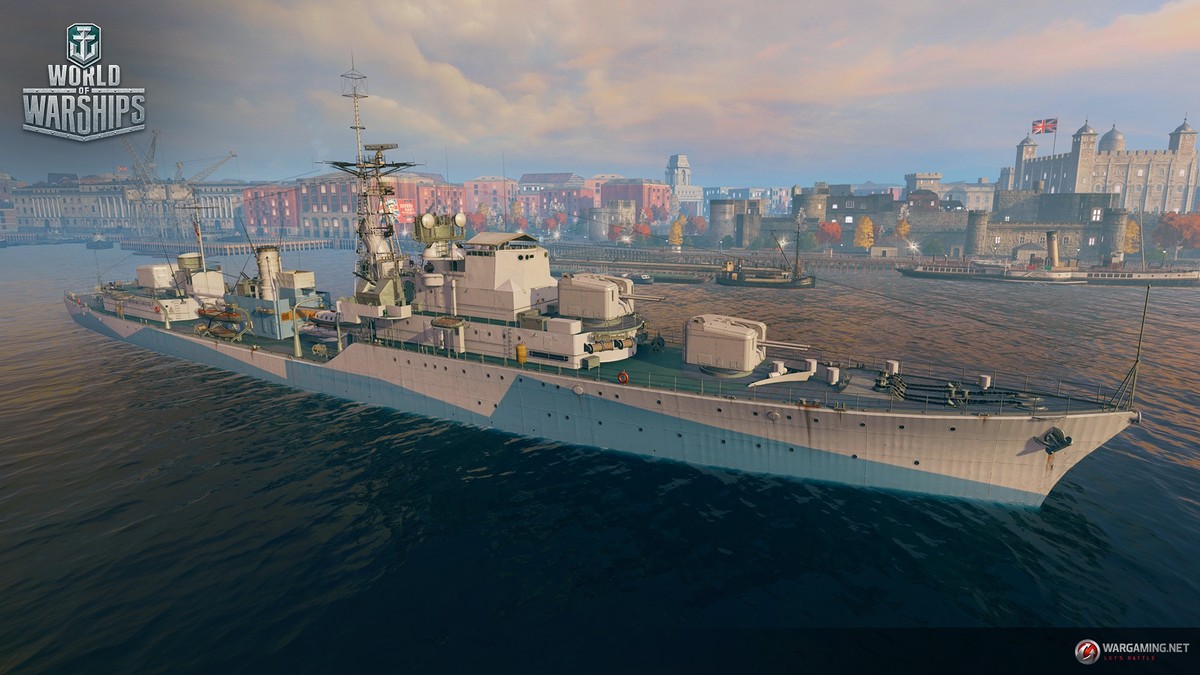 Update 0.7.10 will last for as long as five weeks instead of the standard four. Therefore, the Royal Navy event will comprise five Stages instead of four. Update 0.7.11, however, will consist of three Stages only. 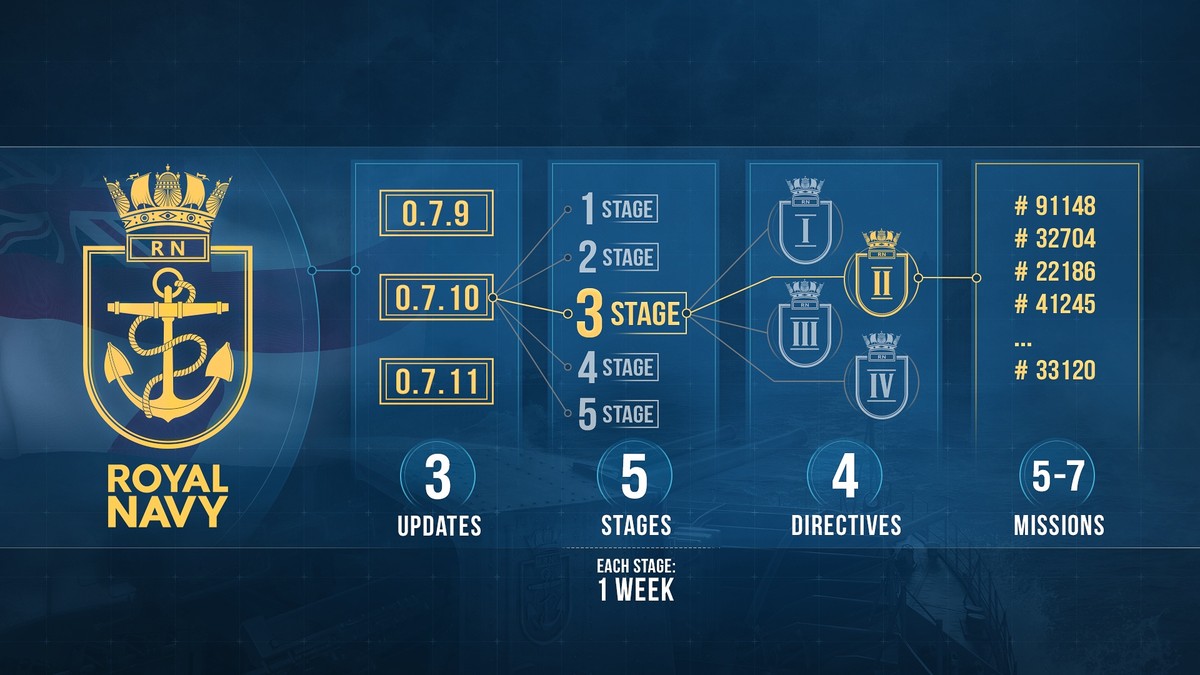 Update 0.7.10 brings new Stages for the Royal Navy event. Each Stage will last for a week and each of them will be broken down into four Directives, with each of these containing a predetermined number of missions. Complete Stages, Directives and missions to get the respective rewards, ranging from in-game loot to Guineas and new Halloween-themed containers.

To climb to the next Directive, complete a certain number of missions from the preceding Directive. Missions can be accomplished simultaneously and in any number of battles, unless indicated otherwise, so don’t worry if you are unable to get something done on the first attempt! All Directives remain available to you until the respective Stage is over. 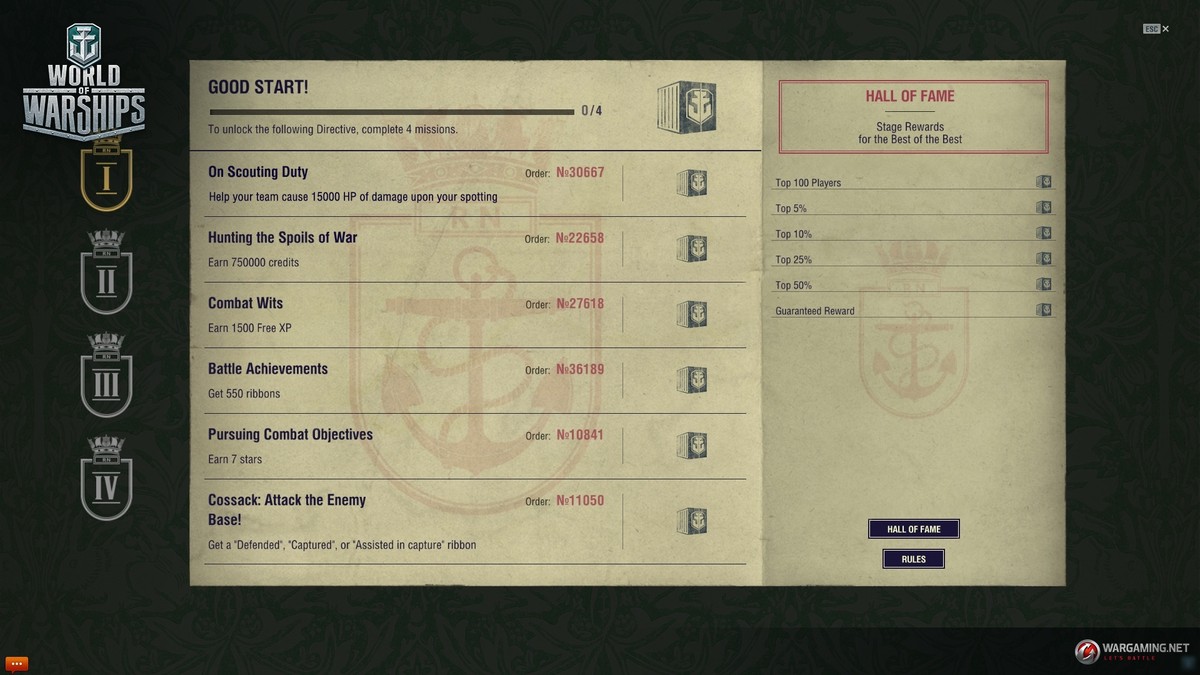 Right now, you can continue to collect Guineas to gain a solid discount for

VIII Cossack and acquire any missing number of Guineas at the Premium Shop.

The tech tree with British destroyers is now available for research, and accordingly we have changed the rewards for places in the Hall of Fame:

In the new update, the majority of the missions for the Royal Navy event will be available for completion in Random, Co-op and Ranked Battles. Some part of the missions can also be completed in the operations dedicated to Halloween! 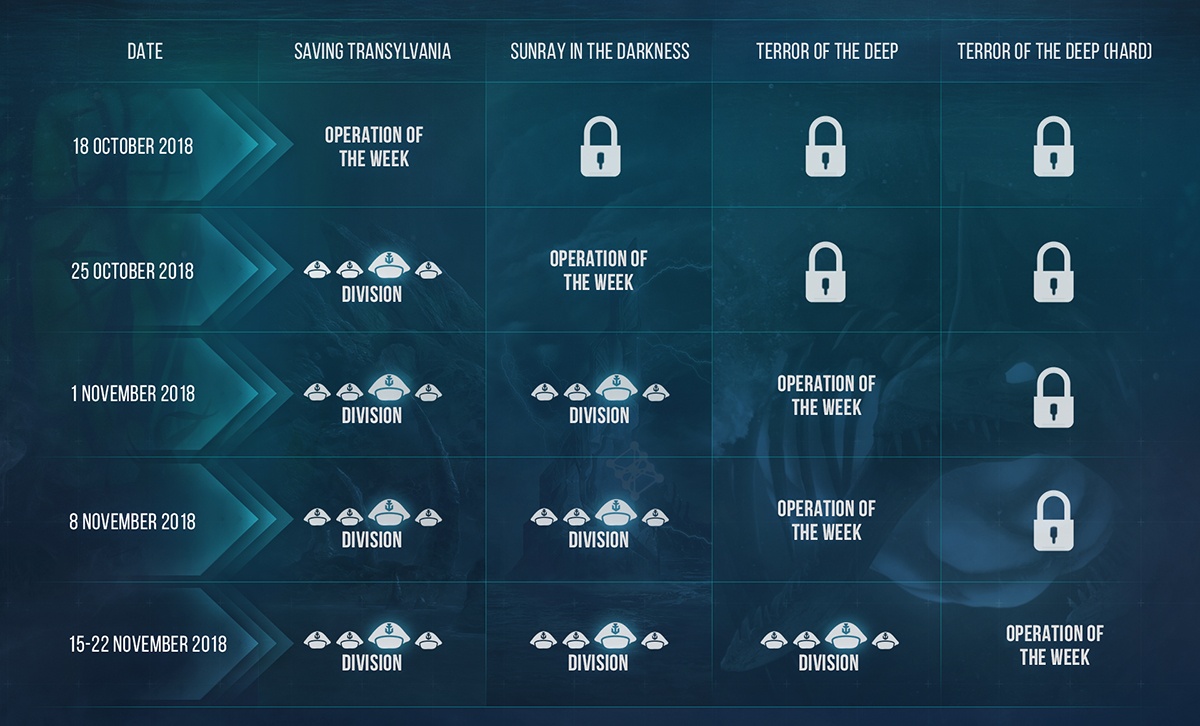 Saving Transylvania and Sunray in the Darkness

On the night of October 31–November 1, vast hordes of dismal evil creatures squeeze out of their shelters to creep around the globe, with the objective of conquering new lands. We invite you to take part in the past operations to keep the evil at bay! Save Transylvania and defend the waters of the Silver Spear Archipelago from the invading forces of darkness in Operation “Sunray in the Darkness”. We should also mention that the operation we’ve just spoken of is now available in Hard Difficulty mode. If you feel like you are a pro-hunter and can put together a team strong enough to accomplish this, try your luck and do it the hard way! 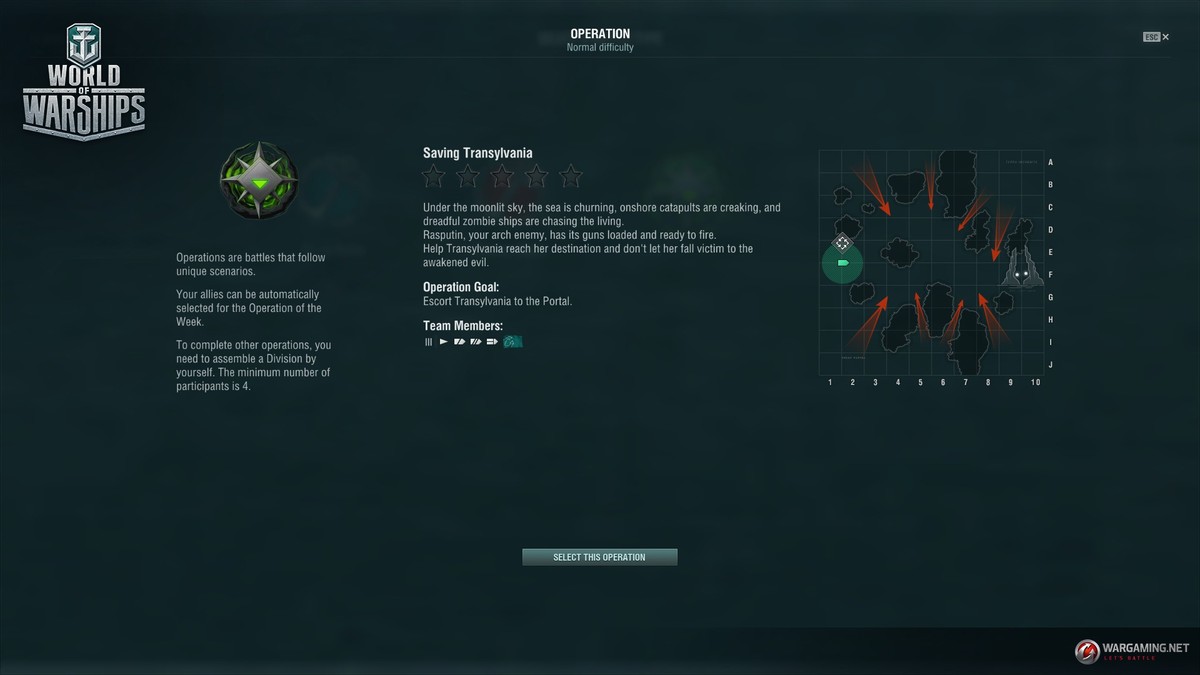 Commanders may be freely moved between any special ships but may not be placed at the controls of other ships. 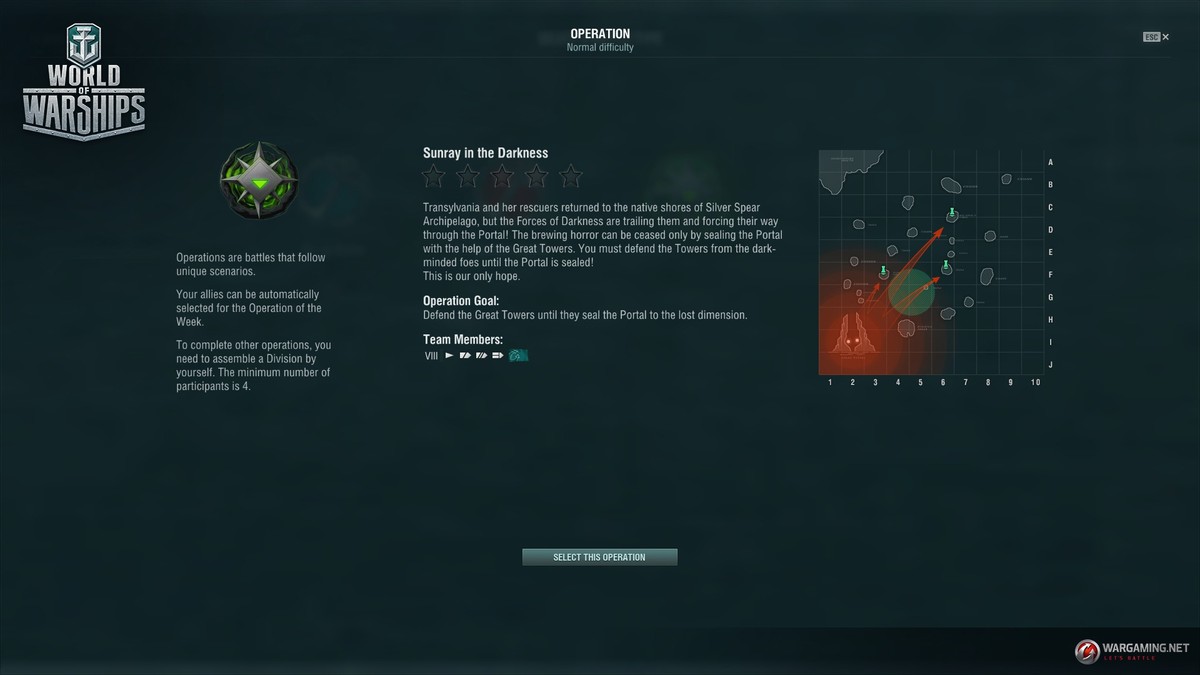 In Operation “Sunray in the Darkness”, players will get the following ships manned by Commanders with 19 skill points:

Commanders may be freely moved between any special ships but may not be placed at the controls of other ships.

Terror of the Deep

The new operation gives you a unique opportunity to test submarines, a totally new type of warship in the game!

Be mindful that initially you get only one submarine—Barracuda—to put your luck and skills to the test in Operation “Terror of the Deep”. Active participation in Operations “Saving Transylvania”, “Sunray in the Darkness” and “Terror of the Deep” will let you get your hands on the other unique submarines. They will be added to your accounts immediately before the new operation becomes available, i.e. on November 1!

Specifically for the new type of warship, we’ve added a new dimension, depth. Submarines will be able to change depth by moving between the water’s surface, periscope depth, and deep waters. Each move a submarine makes will affect its detectability and its ability to mount an attack. Press the “F” and “C” keys to dive and resurface, respectively. 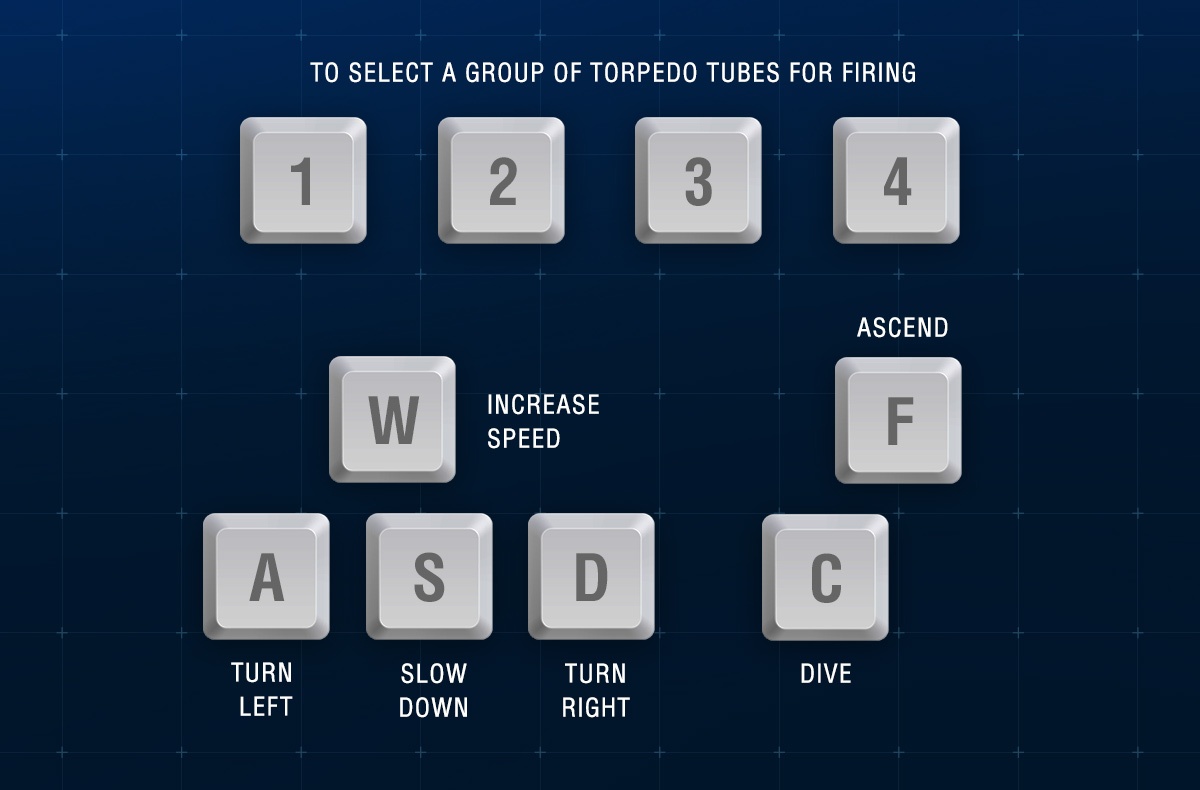 Submarines rely on torpedoes as their primary weapons. In fact, they can be equipped with several models of torpedo. In the new operation, two torpedo models will be available: standard “metal fish” with a decent speed, similar to those carried by destroyers, and “freezing” torpedoes that move faster, deal less damage but, when delivered right on target, cripple all of the target ship’s systems for a limited period of time. 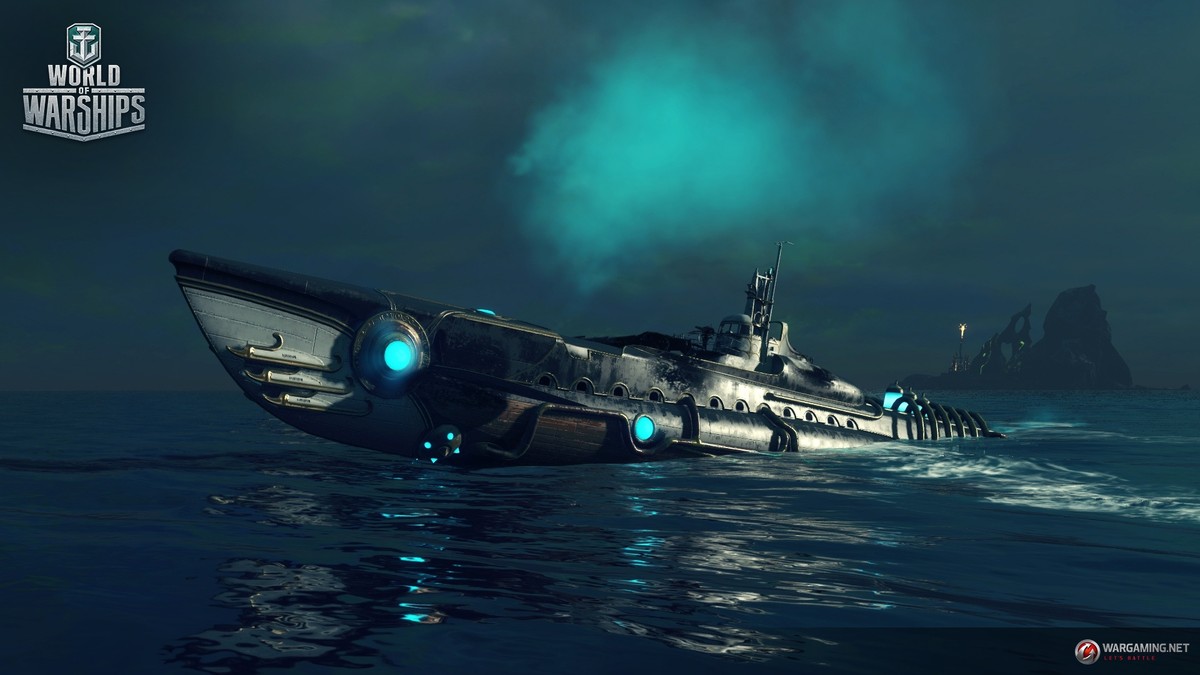 Keep a sharp lookout for catapults and ballistas. You’ll be familiar with catapults from the first operation themed around Halloween. They will attack with giant burning balls that are able to hit your submarine when it’s on the surface. Ballistas will operate on a similar principle but their fiery balls turn into depth charges once they touch water surface.

Depth charges pose the main threat for submarines underwater. Dropped by hostile ships or launched by ballistas, these charges detonate when hit by a submarine, or explode automatically after some time and at a certain depth. A large destruction radius makes them a deadly weapon. Once you get within that area, your boat will take damage. 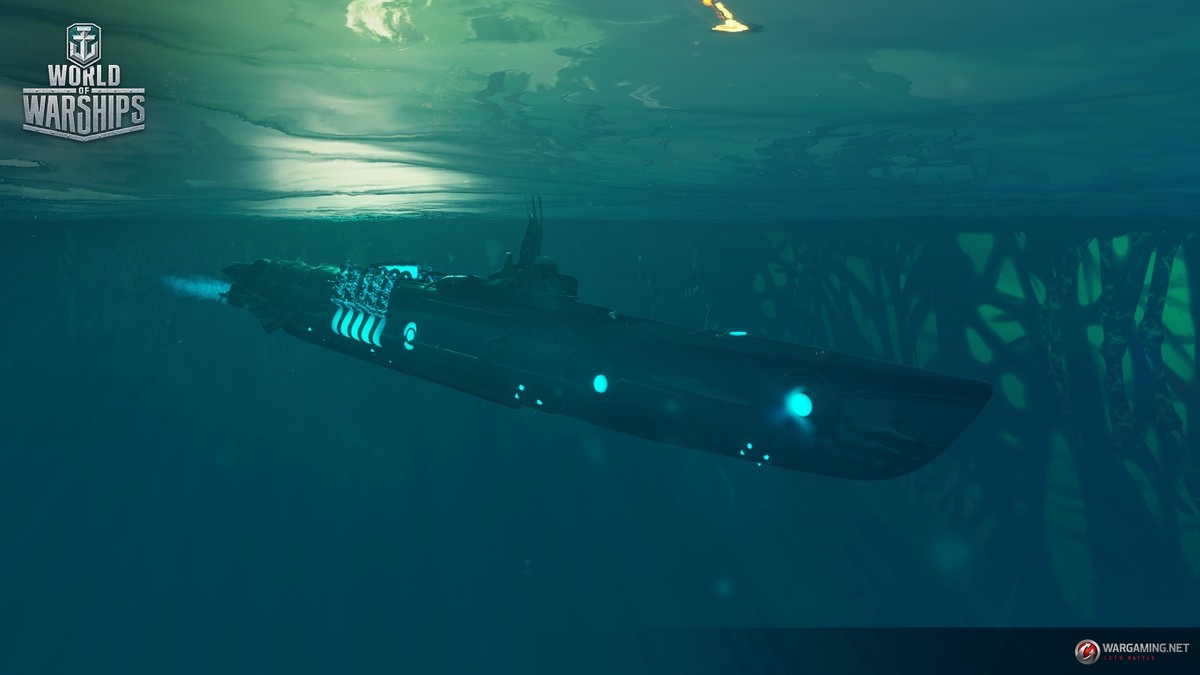 Explore the new type of warship—and destroy battleship Rasputin! The operation will be available in both Normal and Hard Difficulty modes.

During the Halloween celebrations, you can get as many as two new achievements:

To claim the “Warrior of the Light” achievement, you need to complete all three operations this year.

We continue the good old tradition of offering dedicated containers inspired by Halloween. Apart from expendable camouflages, Free XP and doubloons (in Premium containers), Halloween containers may, with a certain chance, reward you with unique permanent camouflages. Most of them are well-known to you from previous years, but the following four will be new to you:

In response to numerous requests from players, the forthcoming Update will introduce a “soft” limit on the number of destroyers in Random Battles to a maximum of four per team. The rule will be triggered if matchmaking for a battle takes less than three minutes for the first player in the queue for that battle. If the timer passes that point, the “old” matchmaking rules will apply.

Update 0.7.10 will introduce a new format for Ranked Battles. We’ll offer two short, dynamic seasons for Tier V ships with an option to play in a Division. One of the key features of the sprint season will be a significantly reduced duration when compared with that of a standard season. There will be a total of 10 Ranks and two Leagues, with Rank 1 being your ultimate objective. The League of Sea Wolves will not be accessible.

To make it easier to keep in mind the parameters of consumables, we’ve harmonized the operation time of the Smoke Generator for all U.S. ships as well as the reach of the Hydroacoustic Search consumable.

Reworked parameters will be as follows: 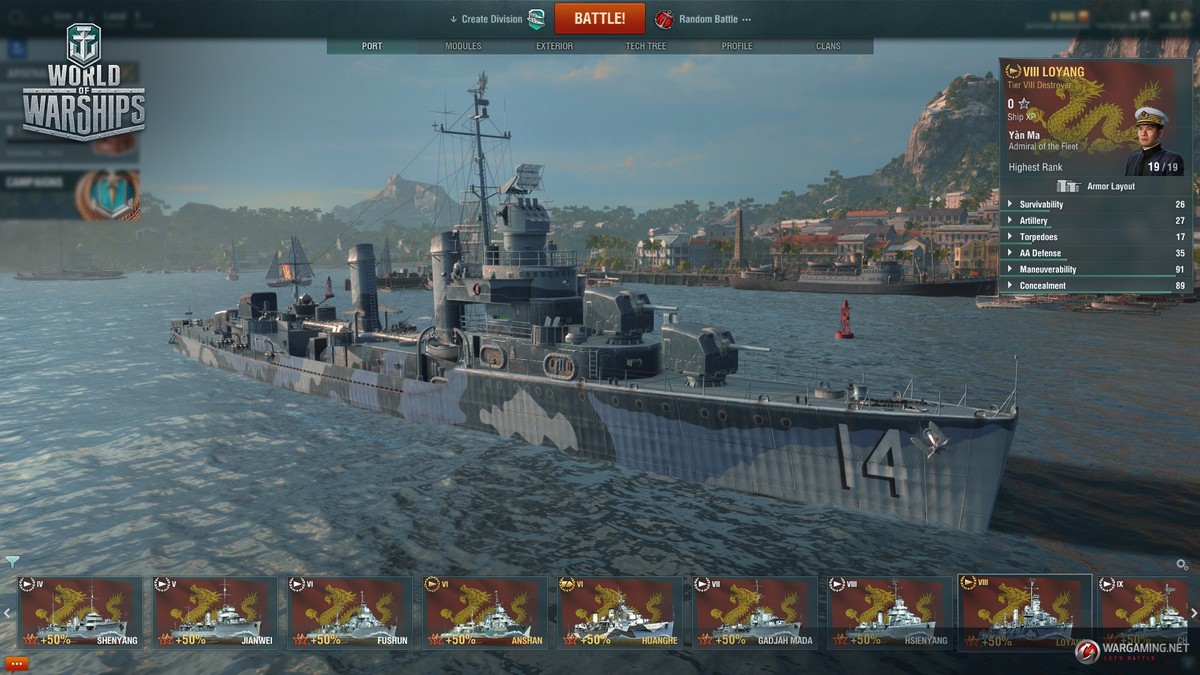 The following ships will carry a Hydroacoustic Search consumable with “unconventional” characteristics:

Tier I Cruiser Black Swan: increased reload time of the ship’s main guns from 4 to 6 seconds. The fix brings the ship in line with the same-type ships in terms of combat efficiency. 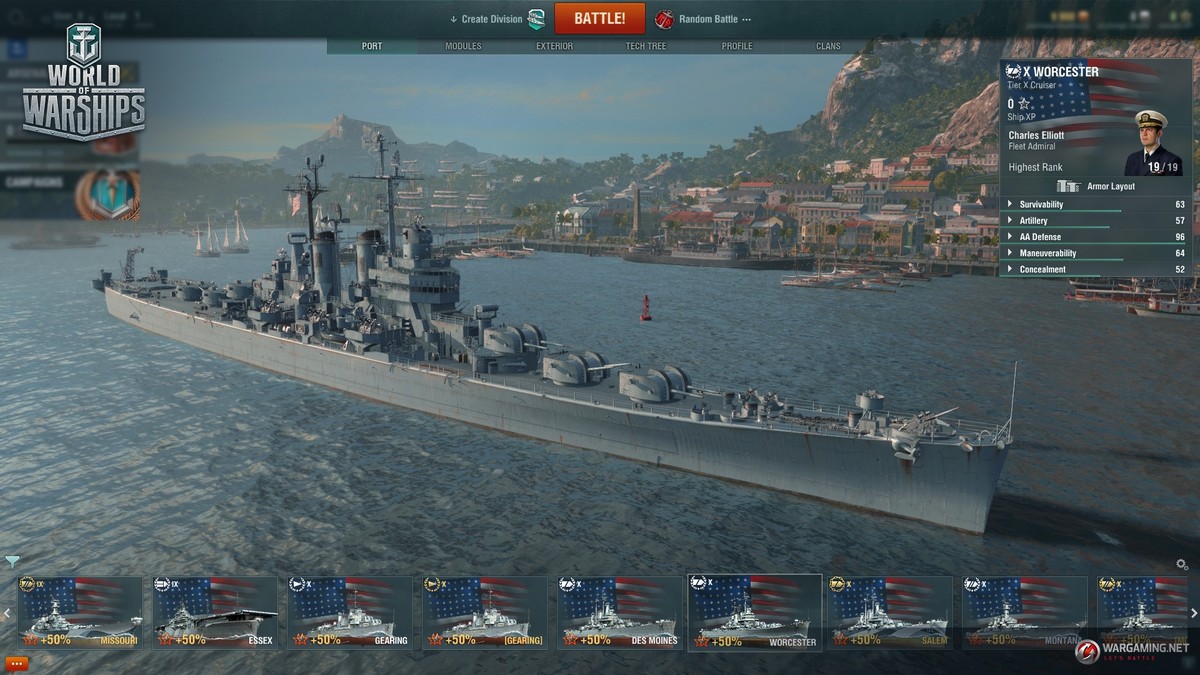 U.S. Tier IX cruiser Seattle and Tier X cruiser Worcester: the operational radius of the Surveillance Radar consumable is reduced from 9.45 and 9.9 km, respectively, to 9 km for both ships.

The rationale behind this change stems from the fact that both cruisers possess a mix of short detectability distance, Surveillance Radar with a long reach, HE shells, and fast main guns reload. With all these factors combined, the two cruisers emerge as overly efficient destroyer hunters. Any destroyer detected within the operational radius of the consumable practically has no chances of escaping from the detection zone and will most likely be lost. Despite this reduction in the operational reach of the Surveillance Radar Consumable, Seattle and Worcester will continue to be dangerous adversaries, but now leaving destroyers with at least the chance for a timely evasive maneuver to leave the detection zone, knowing what ship they are about to face.

With the release of Update 0.7.10, a new section will appear in the game called “Daily Shipments”. Access it to view the list of rewards that you can get for simply logging into the game on a regular basis. 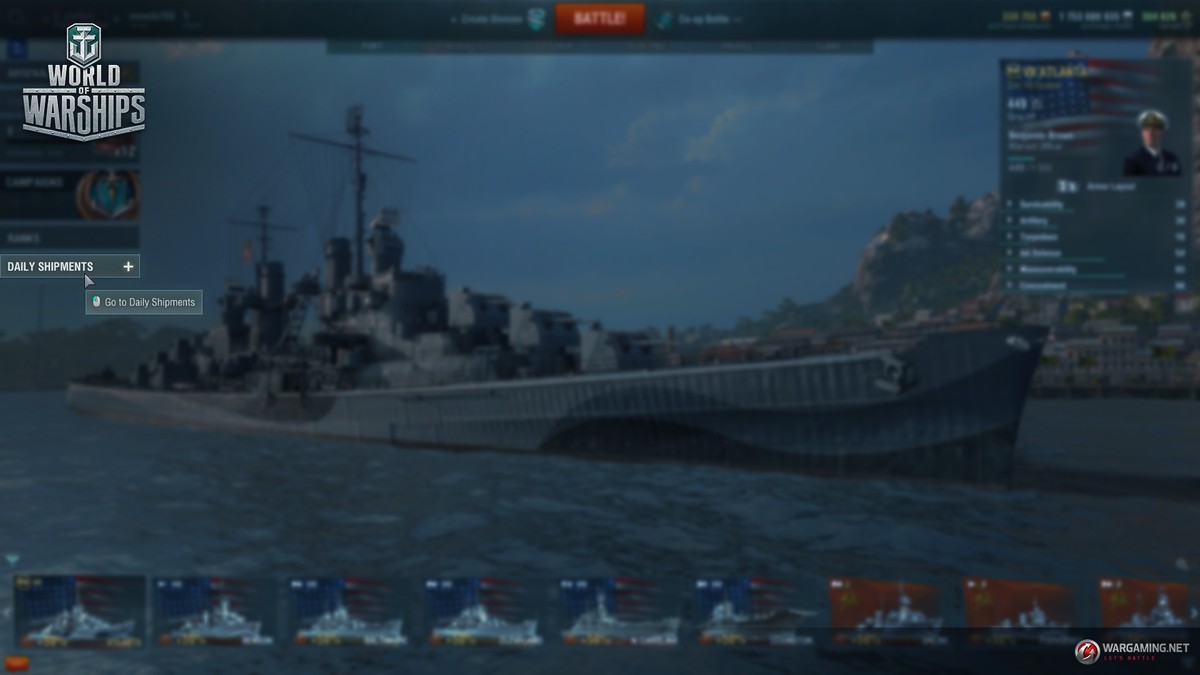 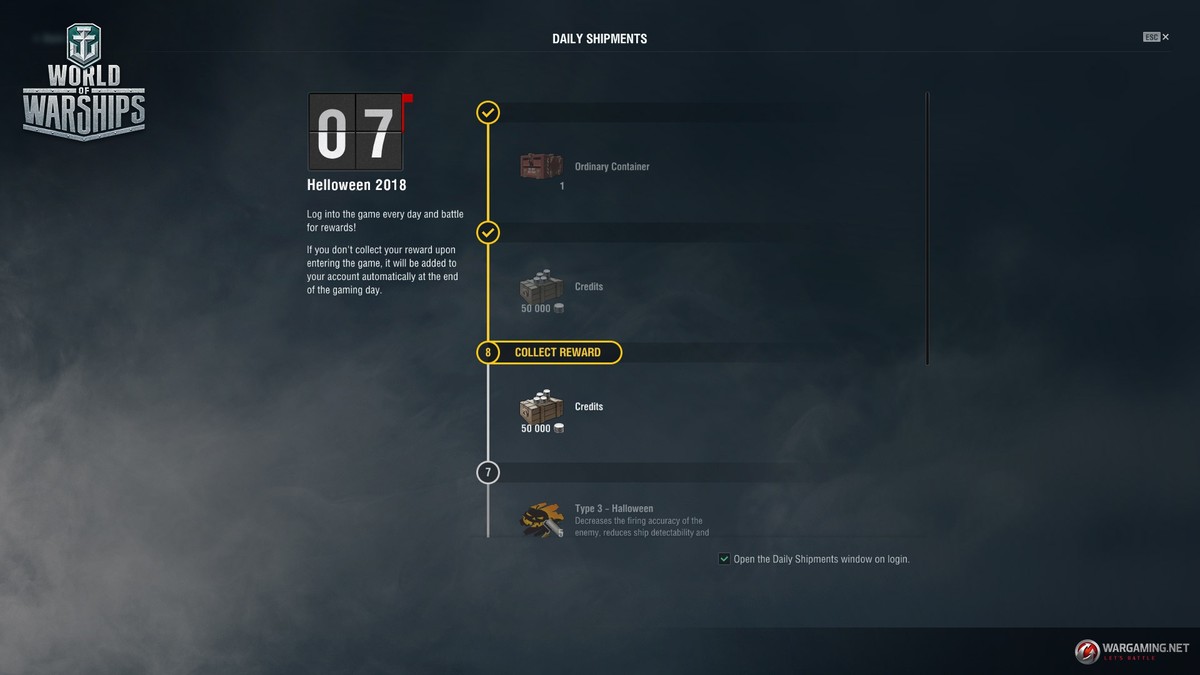 The new algorithm calculates the probability for a ship of a particular type being hit by an approaching torpedo (e.g. a deepwater torpedo passing close to a destroyer), and takes into account the speed and direction of the movement of ships and torpedoes.

All in all, there are two levels of incoming torpedo threat alerts:

We are now in the final stages of testing a new feature that will allow players to enter Clan Battles during the prime time of any server. The Command officers can set a single prime time that would be most convenient for all their clanmates. The desired prime time can be changed each day during an active season of Clan Battles.

On all maps, the following parameters will be applied:

The following ships were added for testing by developers, supertesters and community contributors:

The following camouflage patterns will be available for purchase for doubloons in the game client:

In Update 0.7.10 we disable the Arms Race type of battles. Thank you for your involvement in testing the new mode and game mechanics, your feedback is very valuable to us. We’ll analyze every message received and try to incorporate your wishes in the future. We hope you liked Arms Race and are already waiting to see it back in the game! We, on our part, will make all efforts to roll out the new game with all remarked improvements incorporated.

We added an expendable camouflage called “Victorious” that comes with the following features:

We added a special camouflage pattern for aircraft carrier Lexington. It provides the following bonuses:

A new collection named “The Great Eight” is also on its way to the game! It consists of three sections each containing four unique collectible items. The collection items provide a rich history of some of the brightest moments of Alexander Ovechkin’s sporting career.

Any critical error that occurs whilst the client is running will generate a special report that will be stored in a Reports folder. After that, you will be prompted to restart the client or close it.

This is the first stage in a process of implementing a new system for the collection of critical errors. In Update 0.7.10, such reports will be stored locally on players’ computers but in future updates a special archive will be sent directly to the Dev Team to give them all required information about any occurring incident. In the near future, this system will let us decrease the amount of “manual” operations required from a player when contacting Player Support, or in other instances when more detailed information is required to handle an incident.