Skip to content
TDB Home » World of Tanks: Frontline Is Back!

Frontline is back and will give you the opportunity to get exclusive vehicles! Frontline’s core gameplay and economy remain unchanged, but some adjustments have been made to make the mode even more enjoyable.

This year, Episodes will be replaced by Stages. Every calendar month from March to June, Frontline will kick off and take place for one week. There will be four Stages, between which, Frontline will be unavailable.

The Frontline 2020 core mechanics are the same as last year, but here’s a quick refresher just in case:

One of the main changes coming this Season is the reduction of Frontline Tiers from 30 to 15. Completing them will require less Frontline Experience than last year, but not by half as you might think.

If you managed to reach the maximum Tier in last year’s Frontline and found yourself wishing you could earn more rewards, you’ll be glad to know that special daily missions with even more valuable prizes will be available this year. They unlock upon reaching Frontline Tier 15. The sooner you reach Tier 15, the more missions you can complete during the current Stage and, consequently, the more rewards you can earn!

Mission conditions will vary, but they’re pretty simple in general. You can earn a substantial amount of bonds by completing them.

After the completion of each Stage, progress is reset and you’ll begin the next Stage the following month from Tier 1. Note that you won’t be able to play Stages you missed.

Finally, we’re retiring Prestige Points. Instead, you will earn tokens, the event currency, which can also be obtained by playing Steel Hunter. Use these tokens to redeem any two of the three exclusive vehicles below.

There’s a total of 15 Frontline Tiers. Reaching each Tier brings you fixed rewards: Credits, Regular and Premium Consumables, Directives, and Personal Reserves. Check them out. 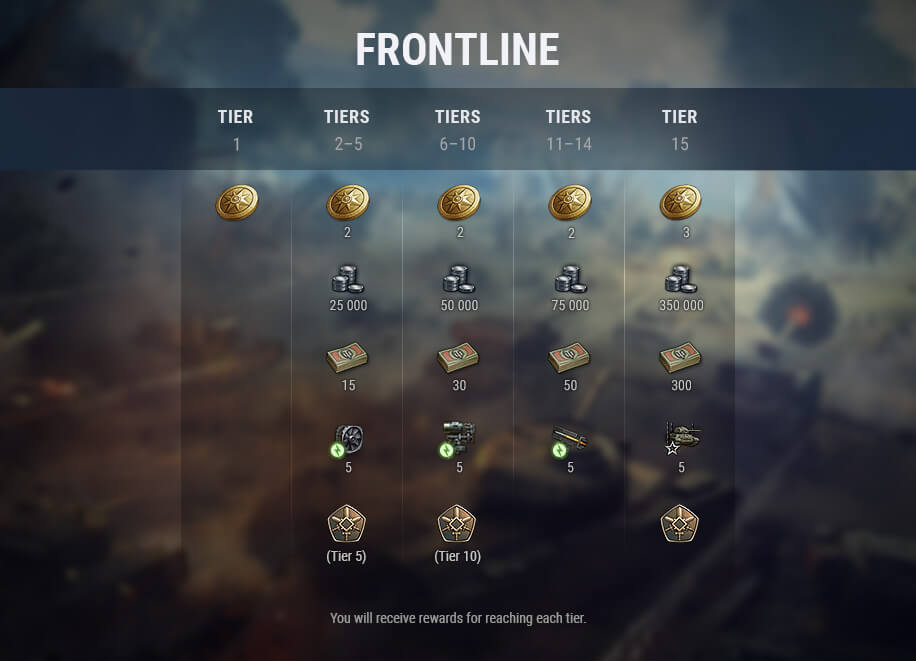 For each Frontline 2020 Stage, you can earn a maximum of 3 tokens—one at Frontline Tier 5, one at Tier 10, and one at Tier 15. In total, you can get 12 tokens for playing all 4 Stages. The most successful players who have collected all 12 tokens will be able to exchange them for one of the following exclusive Tier IX reward vehicles:

You can get a second reward tank (or collect the missing tokens for the first) by playing and earning tokens in the Steel Hunter event, which kicks off in the second half of 2020.

You don’t have to play both modes—the 12 tokens you need to get one tank can be obtained by completing all the Stages of a single mode, or a combination of Stages from both modes.

In the previous Season, only one base tank, the T-44FL, was available for credits. Now another formidable warrior, the T-32FL, has been added to the list of basic vehicles that will be available throughout all Frontline Stages. In addition, these tanks have special vehicle status–this means you can move crew members from another tank of the same nation and class into them without incurring a penalty.

Now all rental vehicles available for gold will be accessible during all Stages. The list of them will be set for the entire Season. They are all replicas of existing Premium tanks.

As in the previous year, all gold spent on rentals will accumulate in a special fund. It can be used to get a discount on the purchase of the original version of any of the leased tanks.

The list of discounted vehicles will be announced later this Season. They will only be purchasable for gold within the game client.

For example, if you are playing in a slow brawler and find yourself surrounded by light tanks, or a wheeled scout is circling you, you can activate the reworked Airstrike and rest assured your enemies will take more damage than you. Also, this Combat Reserve will allow you to smoke out tank destroyers from hard-to-reach shelters.

In the previous Season, you could only choose the direction in which to respawn, and the specific point of your entry into the game was determined automatically. This time, players on the attacking team will have up to 4 dynamic respawn points to choose from, and the defending team up to 6, including those behind the front lines. The defending team has more respawn points because they must be able to fall back and repel the enemy’s attack if it breaks through to the Pillboxes.

Respawn points that are under attack will be highlighted in red.

Both existing Frontline maps, Normandy and Kraftwerk, will receive a slight balance revamp. Kraftwerk will feature new buildings and landscape changes that will hopefully create new opportunities for the attacking team.

On the Normandy map, zones B and C will be rebalanced. Changes in zone B will allow defenders to better repel attacks while zone C will be easier to capture. These tweaks are intended to provide a more balanced and dynamic gameplay experience.