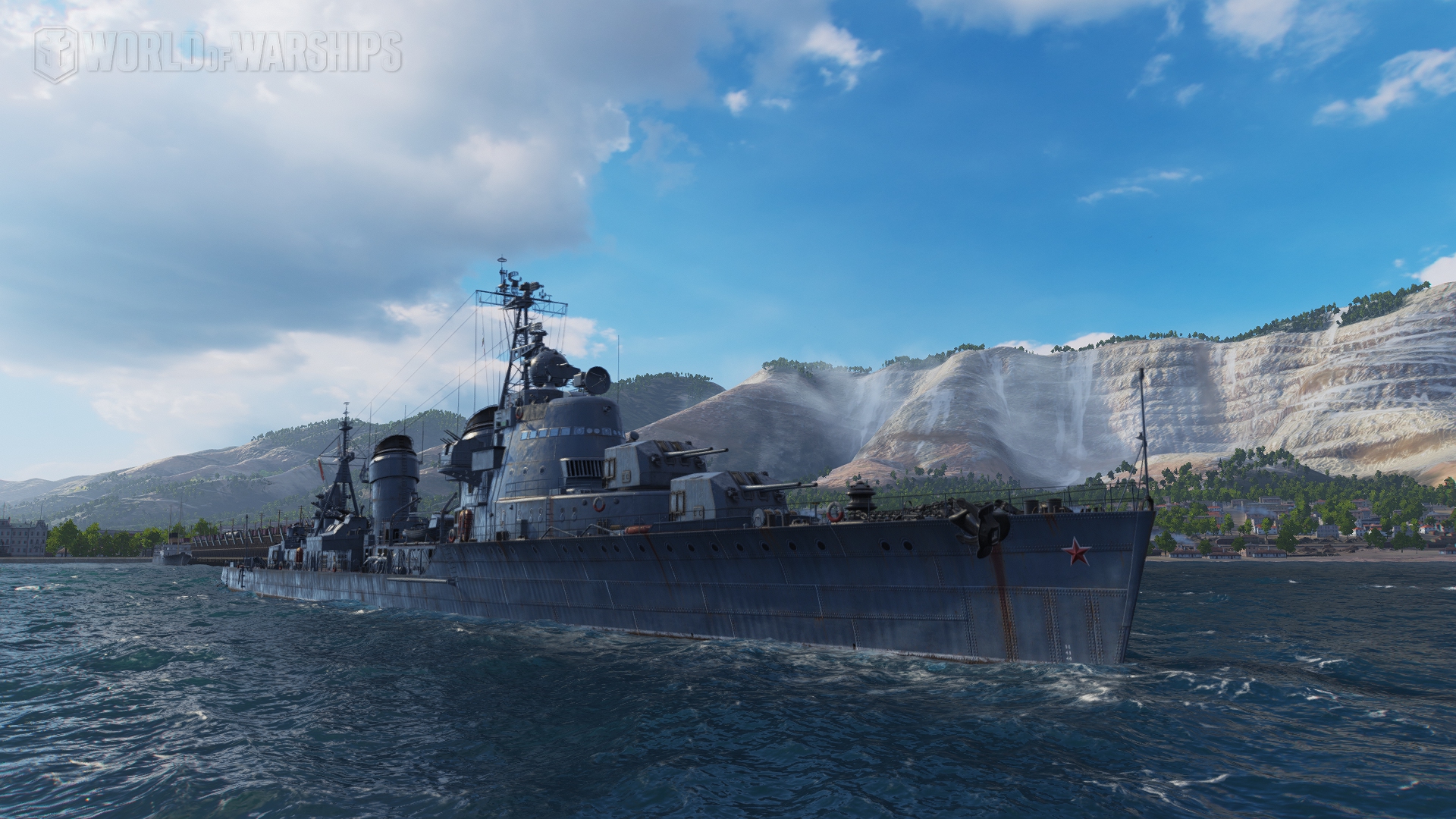 Ladies and Gentlemen, as update 0.11.1 is right upon us, it is time to have a look at the ships that will be released with it. Let’s begin with the Delny and Preussen that will respectively replace Khabarovsk and Grosser Kurfürst as the tier X tech tree ships of Soviet destroyer leaders and German battleships branches.

After Delny becomes tier X tech tree ship of the branch, the following changes will be made to the Khabarovsk:

According to the devblog, Delny is a project of improved Tashkent based on experiences from the war. Sadly, as awesome looking as the ship is, it’s actually a WG-made design.

The permanent camouflage of the Delny provides the classic bonuses for tier X ships:

Delny is a typical gunboat destroyer, well in line with the previous ships Kiev and Tashkent. It’s basically your classic run-and-gun type of destroyer that is mostly all about dealing damage and, when she gets the chance, taking down enemy destroyers. Sadly, in the second category, she isn’t particularly good at it due to her DPM being somewhat limited compared to other tier X gunboats, especially compared to the ship she is replacing, Khabarovsk.

When it comes to choosing between Smoke Generator and Repair Party, I highly recommend you to go for Repair Party as it will allow you to play more aggressively and will generally open a lot more gates to make meaningful plays. The Smoke Generator will allow you to do some no-brain damage farming to some extent or to disengage if you screwed up but you will quickly see its limitations. While Khabarovsk gets a significant increase in firepower compared to Tashkent as she gets an additional turret, Delny… doesn’t get any sort of improvement. She gets a bit less than 500 m of additional range and that’s it. Obviously, it’s not the end of the world and her firepower is still pretty good. Sadly, for a gunboat, it’s definitely below average. Grozovoi which is, these days, more of a hybrid destroyer, has a higher DPM by almost 20k damage per minute.

In action, you will be spamming HE most of the time to farm damage on larger ships or when fighting other destroyers. Farming fire damage will also be relatively easy as long as you don’t get screwed by RNG.
The AP is nothing to ignore either and will be of use when you get the broadside of cruisers or even battleships with soft upper belts like the French or Japanese ones. The torpedoes of Delny are a decent side dish although their damage is quite low. Even with that in mind, these torpedoes are quite versatile thanks to their range, especially when compared to those of Khabarovsk. Well, the anti-air of the ship is… yeah. If a carrier wants to sink this ship, you will rely a lot more on her agility than on her anti-air.

In a similar way to Khabarovsk, Delny possesses a strip of 50 mm armor plating on the side of the ship. However, it is much smaller, only covering the engines while on Khabarovsk, it also covers the barbettes. Delny also doesn’t get the 25 mm deck of Khabarovsk.

Effectively, while Delny is an improvement over Tashkent, I have a hard time calling her a proper tier X ship. Most other tier X ships display as much beefier compared to their respective tier IX or VIII predecessors. Delny on the other hand… it’s really disappointing and you don’t have the “Houmpf!” you would expect from getting your hands on a tier X ship. It definitely isn’t a bad ship with all things considered but tier for tier, Tashkent is without hesitation much better.

If I had to pick between her and Khabarovsk, I would honestly go for the latter, especially with the Unique Upgrade that makes her a really good gunboat destroyer.

For the Delny, I recommend the following commander build and upgrades: I also recommend using the commander Alexander Ovechkin for the improved Survivability Expert.

This concludes my review of the Delny. Thank you for reading this article!