Update 0.7.1 took the players to the sunny French Port of Marseille, with the opportunity to get their hands on several new French Tier V–VIII battleships before general release.

French battleships are now open to everyone who wants to research the branch. Besides this, Update 0.7.2 will bring a new Operation into World of Warships titled ‘Hermes’, and a limited-duration campaign named ‘The Gold of France’.

Please note that the next big Update will go live in four weeks, instead of the usual three.

Now the whole branch is available for everyone, and all ships of the new branch can be researched. French battleships are very diverse, and what’s more—starting from Tier V they are also very atypical. 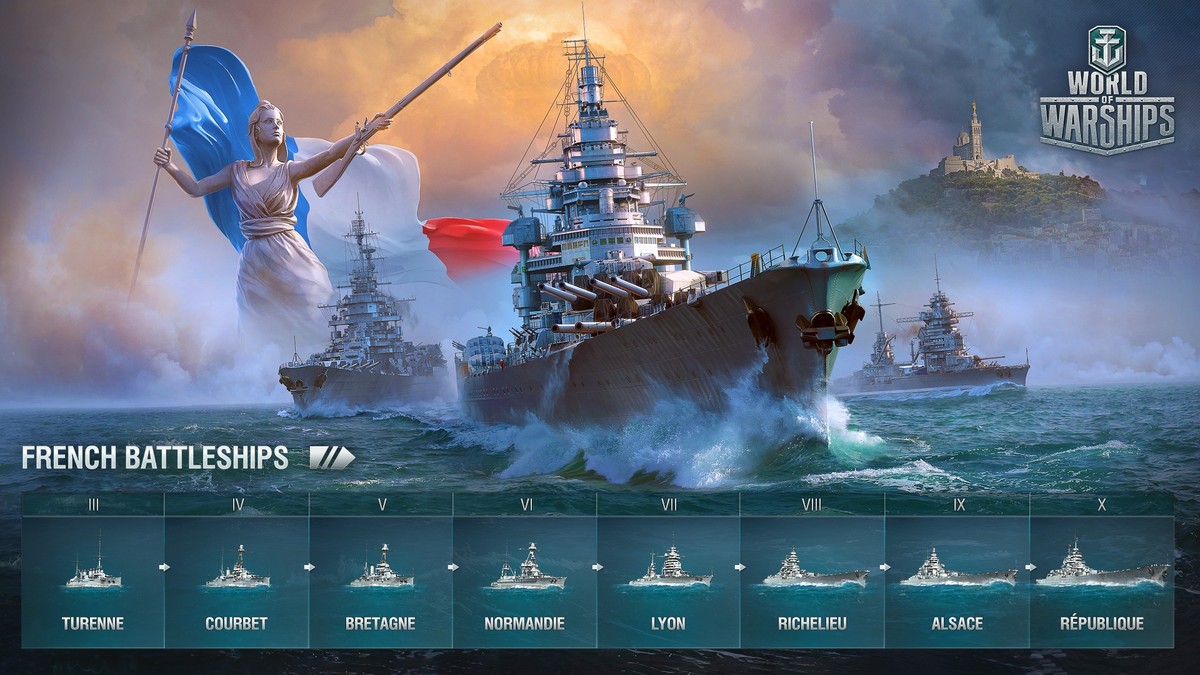 The new Operation charges players with the task of escorting a ship loaded with gold while fighting German patrols. The Operation is made up of several stages:

Operation ‘Hermes’ is extra special as it features ‘thunderstorm front’ – a brand-new game mechanic – that decreases the detectability and spotting ranges in certain areas of the active zone.

To make the atmosphere more realistic, Operation ‘Hermes’ will have restrictions not only on ship tier but also on nations:

When Update 0.7.2 is released, Operation ‘Hermes’ will be available for the 14 days afterwards, and will be on the rotation list of the existing scenarios after this.

Campaign: ‘The Gold of France’

Besides the Operation, players can complete a new limited-duration campaign, ‘The Gold of France’. This campaign will be available for four weeks starting from the day of Update 0.7.2’s release until Update 0.7.3.

It consists of three missions, each mission including four tasks. Some tasks can have unusual ship restrictions, they can be French battleships of different tiers, as well as destroyer Aigle.

Players will be awarded valuable rewards for successful completion of the tasks. By completing the final tasks, the players can receive unique camouflages for battleships Dunkerque, Gascogne, and Richelieu. Three French themed patches will also be up for grabs.

As requested by many players, the speed at which water drops fall back onto the surface was changed. In the heat of the battle, when a lot of shells are hitting the ship and the water surface around it, the view of the ship’s silhouette can be obscured by water drops on the screen.

It can take quite a long time for these water drops to settle down. This can stop you from taking an accurate aim at a ship. This effect is very noticeable when several ships deliver concentrated fire at the same target.

In combination with explosions and smoking ships, this can result in losing the target from sight altogether. That is why the speed at which water drops settle back down to water surface was increased, which should result in better aiming at targets, and more effective co-ordinated salvos fired by several allied ships at the same enemy target.

Other visual effect changes include:

The players who completed sub-collections ‘Uniform’, ‘Uniform Items’, ‘Awards’, and ‘Ships’ of the ‘Yamamoto Isoroku’ collection will be able to use additional colour schemes not only for standard expendable camouflages (‘Type 1’, ‘Type 2’, ‘Type 5’, ‘Type 6’) but also for permanent camouflages on Japanese ships.

Sub-collection ‘Uniform’ unlocks the ability to change the colour scheme for destroyers, ‘Uniform Items’ for cruisers, ‘Awards’ for battleships, and ‘Ships’ for Aircraft Carriers. The alternative colour scheme is the same for both permanent and standard camouflages, and it’s also nation-specific.

Just a reminder that the players who played a Random or Clan battle with Tier VIII–X ships in Update 0.7.1 will have received a set of three Tier X rental ships for temporary use:

In Update 0.7.2 these ships will be removed from the player’s account and replaced with three new Tier X rental ships:

In order to receive these ships on your account, you need to play a Random

battle in Update 0.7.2 with a Tier VIII–X ship. When this requirement is met, you will find all three ships in your Port.

IX Missouri will become unavailable for purchase for an undefined period. We added

IX Musashi that can be obtained with Free XP – two ships in this niche are too many at the moment.

When using the alternative UI mode (Adaptive or Full in the corresponding drop-down menu in the Settings>Controls tab), current detection range of the ship is now displayed right underneath the aiming distance by the crosshairs. The value will change depending on:

In the default UI, players will be able to view their current detection range by pressing the “H” key (Show ship status) button.

Upon pressing the “H” button the ship status table will now be displayed to the right of the ship’s basic info. This will prevent the table window from appearing outside the game screen at lower resolutions and it will no longer cover the minimap.

Improved geometry and textures of:

Improved the ship destruction effects for: