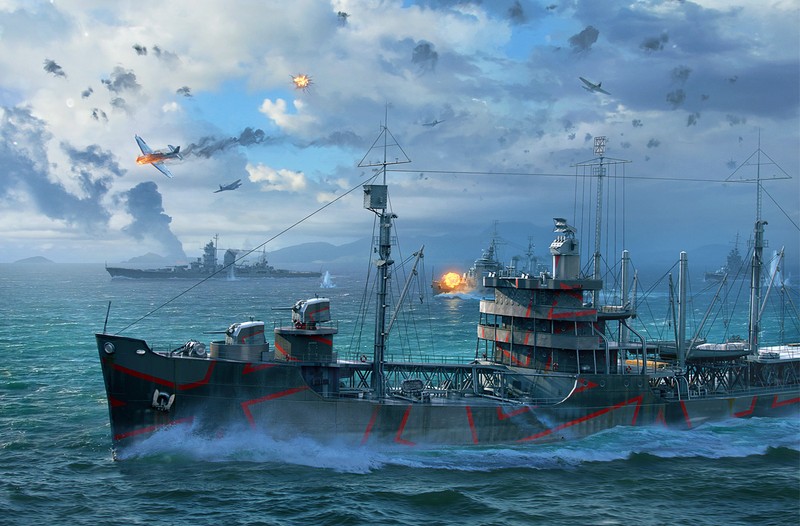 Update 0.6.15 will bring a new operation—”Operation Narai”—to the game. This will be restricted to Tier VII ships.

Get ready for a heated battle! The Military Command has tasked you and your team with gaining control over the surrounding area of the enemy base. You will need to ensure the safe landing of assault troops OR destroy all enemy defence forces lying in wait. Intelligence reports suggest: 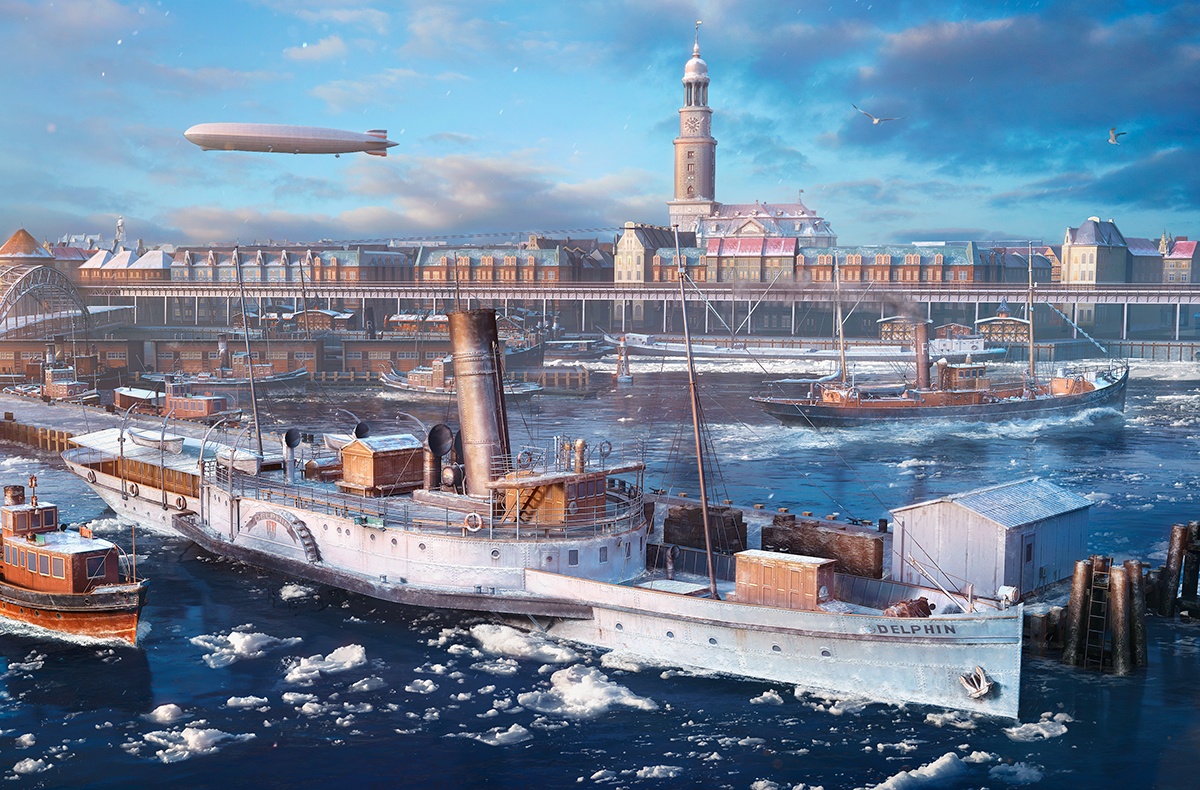 Commanders, we’ve got a brand new Port waiting for you—Hamburg! It will be enabled by default for all players with the release of Update 0.6.15. The new Port is distinguished with its historical authenticity, and once the update is installed, it will join the list of other ports generally available to players.

When the Update goes live, players will be able to test their skills with two new campaigns. One of the campaigns will be dedicated to a historical event, the Battle of the North Cape, while the other new campaign, “New Year Raid”, will be putting a festive spin on things. Both campaigns will be available for a limited time only. 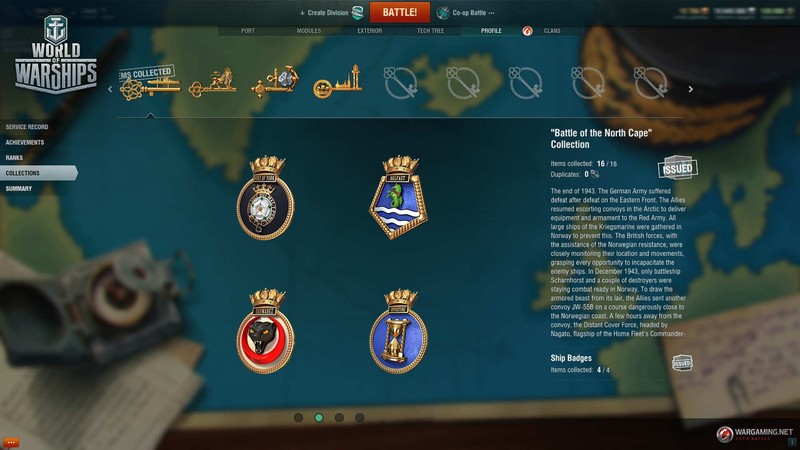 Your reward for completing the final task of the first campaign, the Battle of the North Cape, will be the Tier VII Premium British battleship Duke of York. The successful completion of the New Year Raid campaign will bring you five researchable Tier VI ships with unique camouflage while the final task, once finished, brings an Arctic-themed camouflage for the Tier VII German battleship Scharnhorst. 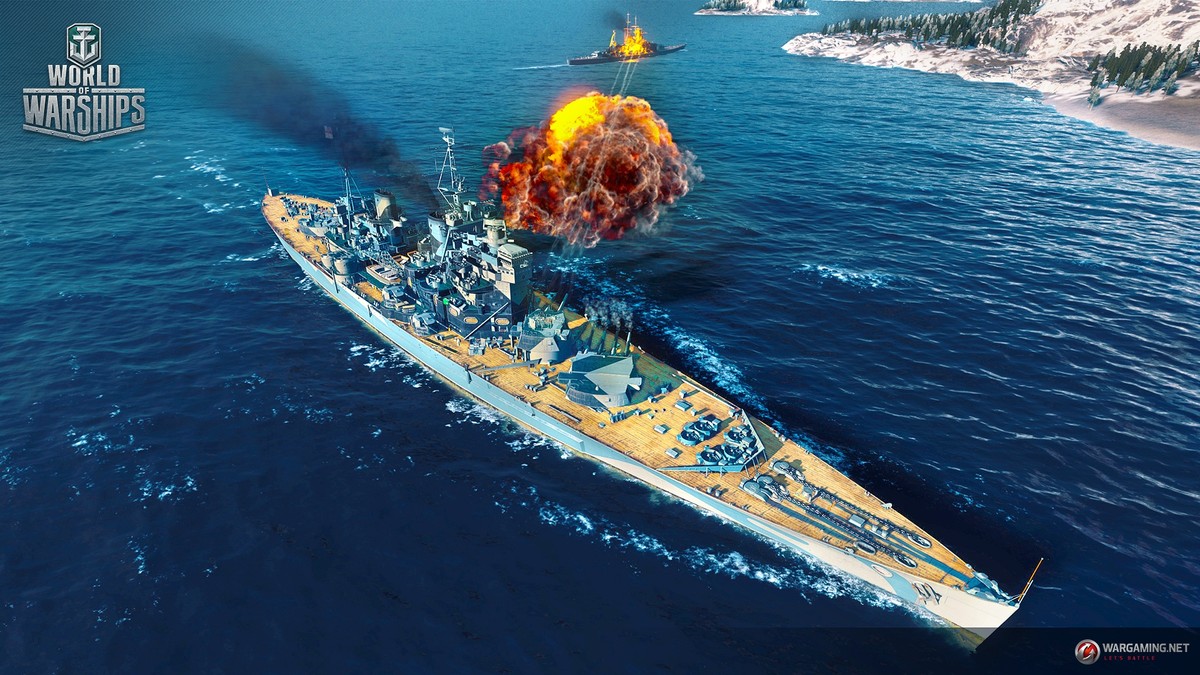 Once Update 0.6.15 is released, players will be able to start collecting items from the new collection dedicated to the Battle of the North Cape. Collection items will include ship elements, photographs, badges, and coats of arms. Collection items will come in special Containers that players will receive for completing the tasks of the Battle of the North Cape and New Year Raid campaigns. Once you have the entire collection, a special Arctic-themed camouflage for the battleship Duke of York will be credited to your account.

To add even more fun to the fast-approaching New Year celebrations, we’re adding a ship horn that will produce a special New Year inspired sound!  Throughout the duration of the New Year festivities, all Captains will be able to warn other players of the risks of a collision, other dangers, or a torpedo salvo. We thank all our players that provided feedback and requests while we worked on this new feature.

By default, a ship’s horn is activated by pressing the “N” key. The sound signal can be heard by all players located at a sufficient distance from the ship of the player sounding the horn. The shorter the distance, the louder the horn. As for the horn signals produced by enemy ships, only the sounds of detected enemy ships will be audible to players. Within one or two km distance, the horn signal loudness will be set to maximum. At 3-5 km, the sound starts to fade away, and at 5 or more km the sound of the horn signal will be barely audible. If a ship is located farther away, it may only be heard when detected in the binocular view.

To discourage Captains from abusing the new feature, the ship horn will have a limited operation time. The maximum operation time is 4 seconds. 15 seconds after the last key has been pressed, the operation time begins to recover and, if the signal has been “used up” completely, the maximum recovery time will be 45 seconds. It will be possible to use the horn before it has reached 100% recovery. 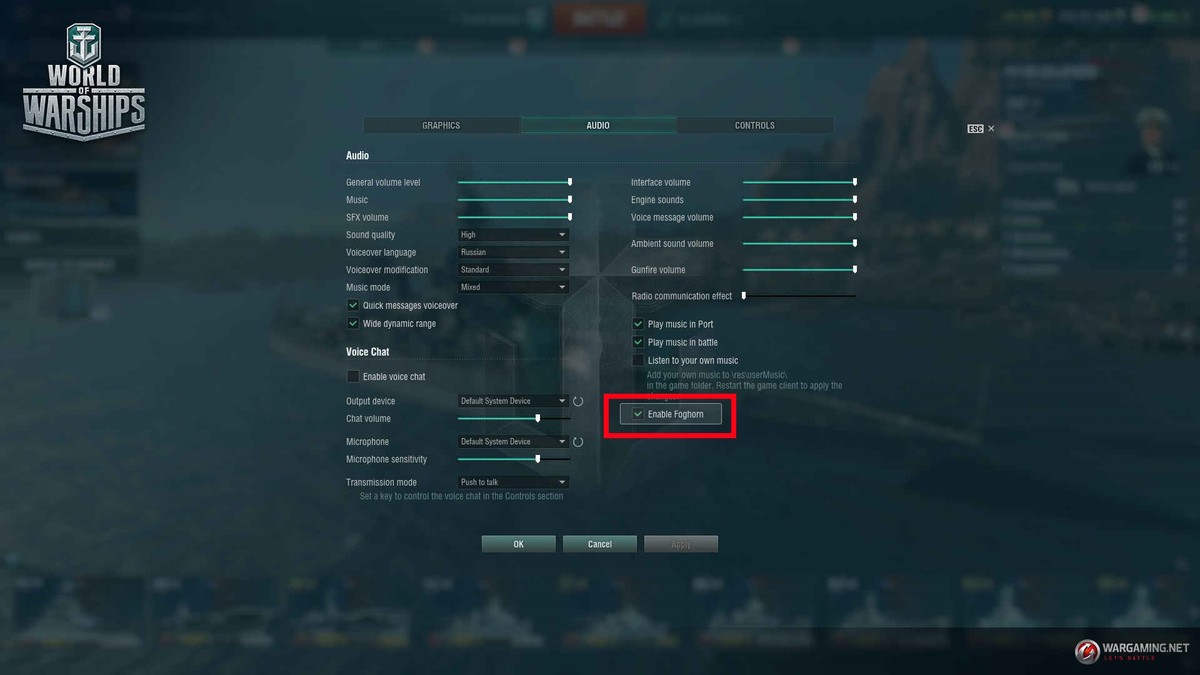 If you find the sound of the horns are not to your liking or you don’t want to hear them, you can disable sounds completely in the Audio settings. To do that, access the Game Menu, select the “Settings” tab, open the “Audio” section and untick the “Enable ship horns” field. Please note that if a ship’s horn sound is disabled in Settings, your ship will not be able to send signal sounds either.

Ships of different types will have different sound signals. You may encounter 23 original horns and several unique sounds. Play with various ships to try them all. In any case, we’re sure you’ll like them. We look forward to them being used creatively!

Enhancements to the Ultra Audio Quality

We have reworked the bomb attack scenes involving Graf Zeppelin’s Stuka aircraft to make them more realistic. Now, when bombs are dropped, the Captains of Graf Zeppelin and all nearby ships will hear the distinctive and terrifying screech of the Stuka siren. We have also reworked the accompanying sound pattern for each type of squadron, reproduced during approach for landing. If the carrier Graf Zeppelin is on the opposing team, you’ll be able to hear an enhanced sound of its squadrons flying by your ship. 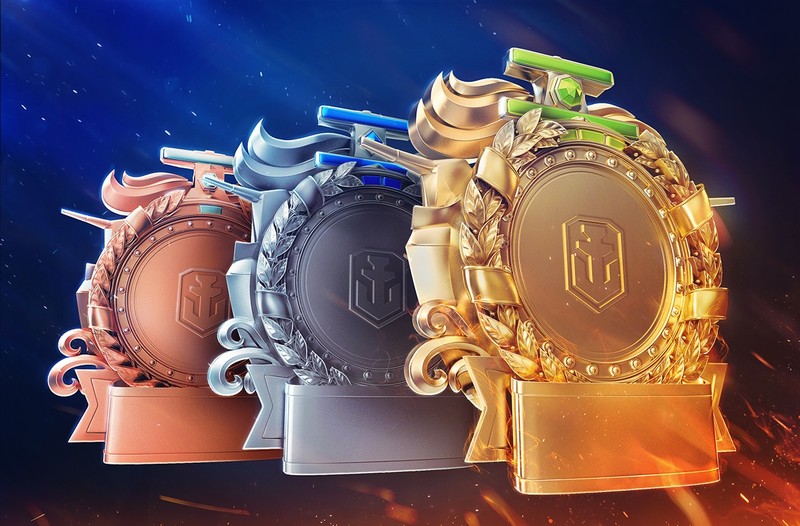 With the release of Update 0.6.15, clan battles will no longer be available. The first season is coming to an end but don’t worry – the next one is on the horizon! All previously rented ships, i.e. the Soviet Cruiser Moskva, the American Destroyer Gearing, and the Japanese Battleship Yamato, will be removed from players’ accounts.

All players who participated in Clan Battles and fulfilled certain conditions will receive commemorative achievements on their accounts:

Please note that achievement Hotspot is given to all members of the clan only if the Typhoon achievement is on the account.

Achievements will be credited to players’ accounts within one week following the release of Update 0.6.15.

During a five-day period, all players will be able to reset the skills of their Commanders and change upgrades on the ships they helmed in Clan Battles for free. There is a 100% discount on resetting Commander skills and demounting upgrades!

Captains, get your favourite Tier VIII ships prepped and ready for a new season of Ranked Battles starting on 22 December.

A new effect—minus 10% to the cost of the ship’s post-battle service—is added the following permanent camouflages:

The Type 10 permanent camouflage (Missouri, Black) will provide -20% to the cost of the ship’s post-battle service.

The following permanent camouflages will now give -10% instead of -5% of the cost of the ship’s post-battle service:

The effect of reducing the cost of the ship’s post-battle service, provided by the following permanent camouflages, has not changed:

Update 0.6.15 will bring a lot of new tips that will appear in the battle loading screen. This will help with the influx of new players to the game and provide a better experience for all players. 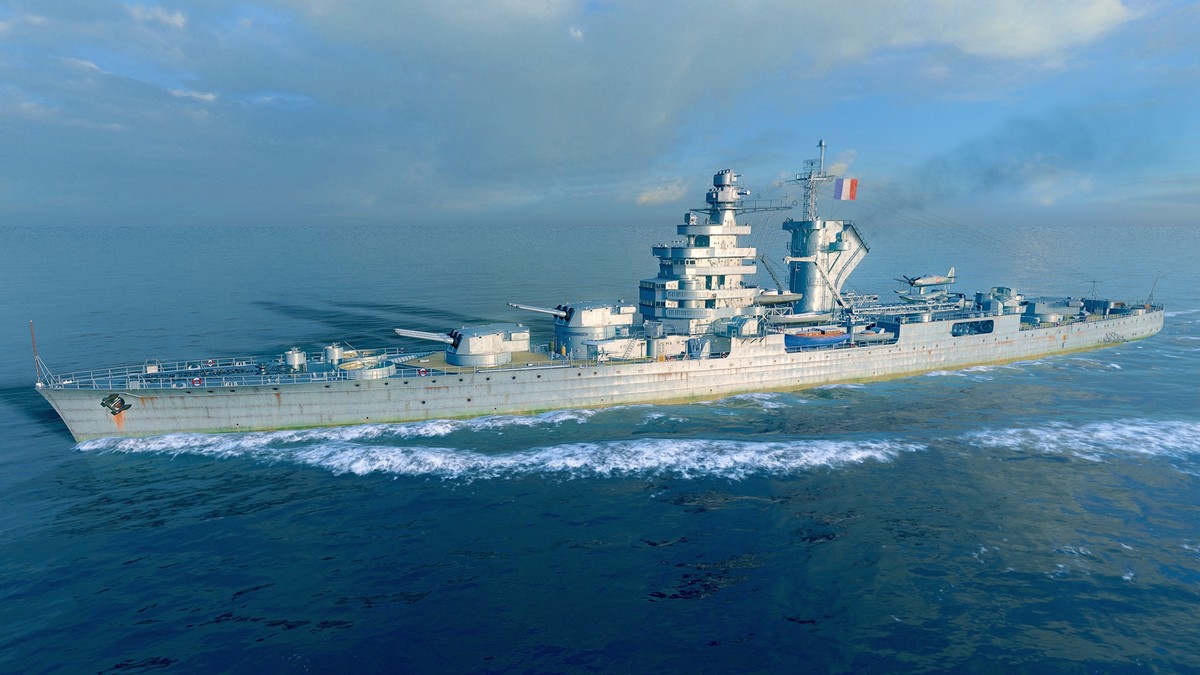 The following ships were added to the game client for testing by developers, supertesters, and contributors:

The following ships are available for purchase in-game:

The following ships are no longer available for purchase in-game: