Admiral Schröder is based on a German battlecruiser design from 1928. This design was intended as a treaty cruiser killer, armed with eight 305 mm guns in four twin turrets as well as a heavy secondary battery with 150 mm guns in triple turrets. Those ships would have a standard displacement of 17 500 tons and be able to reach 34 knots but in return, the main belt was quite thin with only 100 mm of armor. 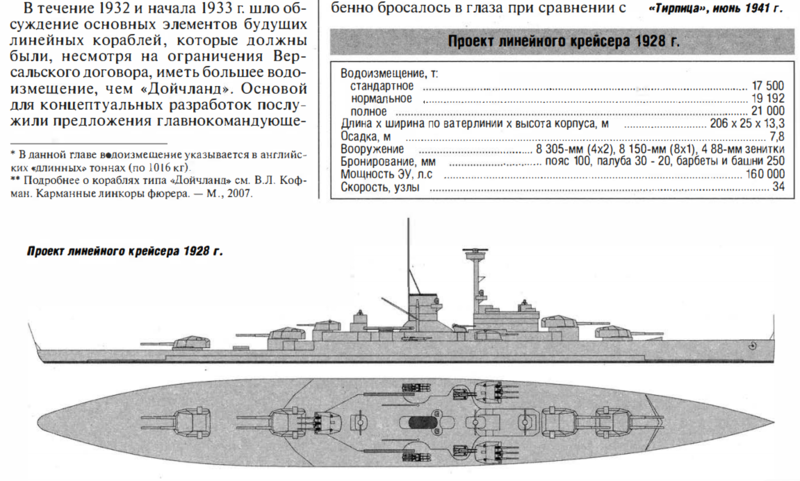 For such ships to ever come to be, a nullification of the Versailles treaty was necessary as it was limiting Germany to build ships with a maximum displacement of 10 000 tons. However, Vice-Admiral Hans Zenker, the one in charge of this battlecruiser design as well as the “father” of the Panzerschiffe design, annoyed the Reichstag a bit too much, constantly pushing them to negotiate the nullification of the Versaille treaty. As a result, he was replaced with Erich Raeder and the 1928 design was abandoned. However, when Hitler came to power, he would dust it off, and the Scharnhorst-class would be born from its ashes.

In World of Warships, Admiral Schröder is based on the 1928 design but gives it a major modernization, may it be in terms of armament with the 128 mm secondaries and modern anti-air or even radars. She also seems to get a longer Atlantic bow. Other than that, her secondaries have the same dispersion as those of German battleships (AKA Preussen and co.) and she gets a 15% Engine Boost. As of right now, I’m scratching my head trying to figure out why this ship even exists. Firepower-wise, she is far down the food chain with terrible ballistics, weak HE outside of the improved penetration, and horrible AP. I suppose that Wargaming want to make her a secondary-focused brawler similar to Napoli but unlike her, Schröder only gets German battleships secondary dispersion. This is far from enough to make secondaries viable on a cruiser considering that they don’t have access to any commander skill to improve them.

Other than that, the armor isn’t anything impressive compared to Siegfried and Aegir so… yeah, I really don’t understand the point of that ship.