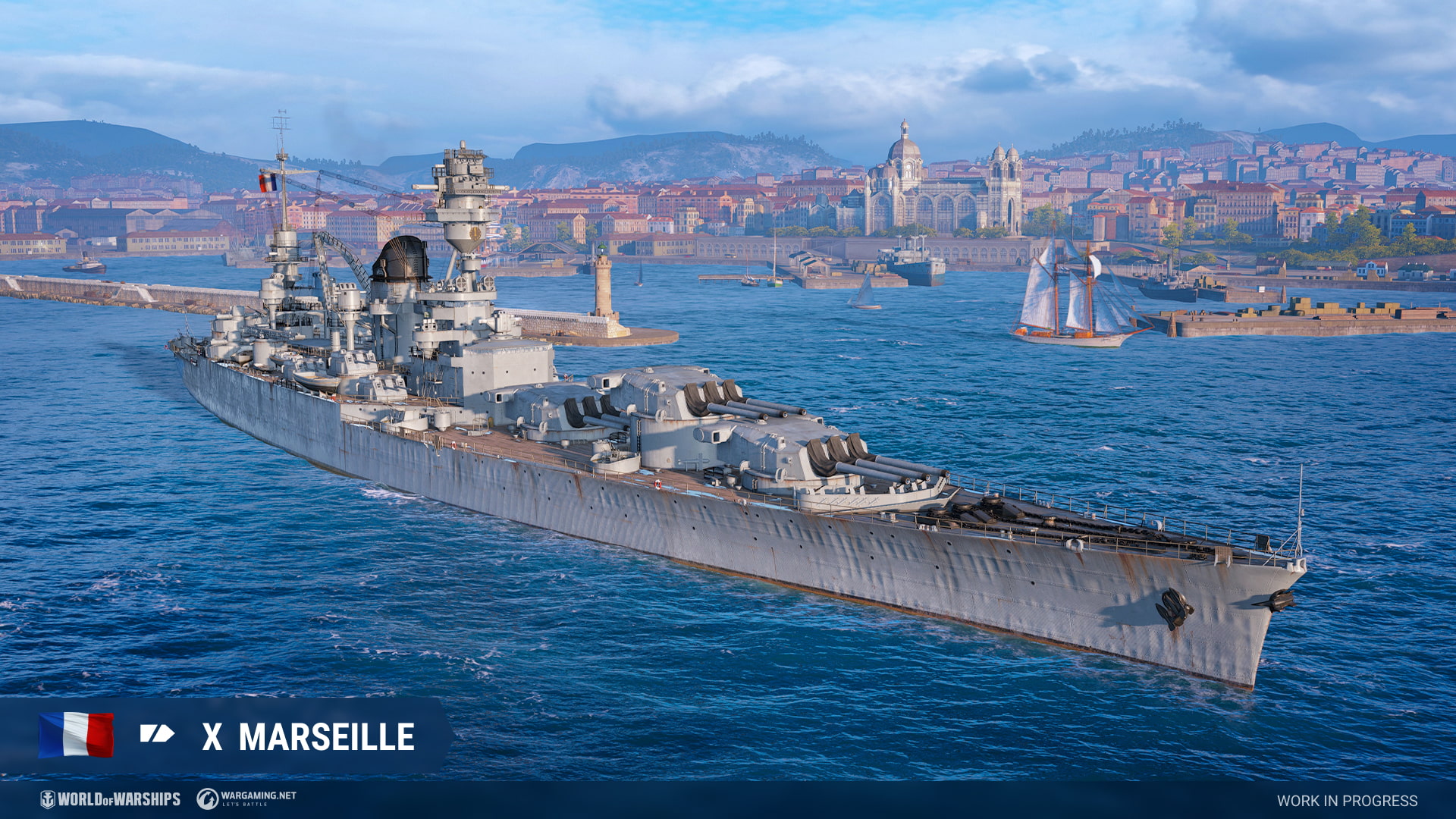 Soooooo… In terms of Frankenstein Monster made in Wargaming, I think that Marseille takes the cake.

This ship is a big mishmash of the 17 500 tons battlecruiser design with a preliminary design from the Richelieu-class battleships. More precisely, Project 4. This early design had the same turret placement as the Nelson-class battleships but with 380 mm guns.

To this already odd mix, they added the same 330 mm guns as on the Dunkerque-class but that’s not all! They also decided to give it a fairly cursed secondary battery by taking the triple 152 mm secondaries from the Richelieu-class and then using 138.6 mm guns on them.
Last nail on the coffin, we are talking about a ship with armaments and design decisions from the mid to late 1930s. Why on God’s green Earth does it have a superstructure straight from the 1920s? It just makes no sense at all when at this period, you already had French ships appearing with more modern superstructure like the Algérie or the Dunkerque-class.

So yeah… it’s basically one of the worst designs Wargaming came up with so far.

In terms of in-game characteristics, Marseille is armed with some of the biggest guns in the game for a cruiser with all turrets located at the front of the ship. She suffers from a long main battery reload time and one of the worst cruiser dispersion but it is compensated by a Main Battery Reload Booster consumable.
Her armament is reinforced by a heavy secondary battery with improved dispersion similar to Massachusetts or Schlieffen.

The ship is thinly protected for a large cruiser but in return, she gets good concealment and, good agility, especially thanks to the Engine Boost consumable. Marseille has the strengths of having very strong guns, good concealments and mobility as well as the advantageous main battery placement (when she isn’t kiting). She also still retains the glaring weaknesses of the previous ships and, arguably makes it worse.

At tier X, it is not a secret for anyone that we have a lot of strong roaming, damage-focused cruisers. Here, we are looking at yet another one that suffers from an over-reliance on a consumable that has to compensate for both very long reload time and poor dispersion. Of course, the firepower without reload booster would still be decent but it would definitely lag behind that of Hindenburg, Venezia, Henri IV or even Yoshino.

She also suffers from the 30 mm plating and overmatchable turtleback as well as a vulnerable front citadel athwartship. Long story short, tier X battleships will eat her alive. If it wasn’t bad enough, her Repair Party only covers for 10% of citadel damage but it could be a bug.
Also, just like Brest, she retains the massive issue of having a slow turret traverse on a ship that has a tight turning radius and on top of that moves fast. The guns will have no way

We will see how it goes and Wargaming have all the time in the world to balance them but right now, I’m honestly unimpressed by these French large cruisers.