Skip to content
TDB Home » World of Warships: Public Test of the Update 0.8.0

Well, well, well… here it is. The Public Test of the Update 0.8.0 that signs the end of the Aircraft Carriers as we currently know them.

As a side note before we start covering the changes that the update is bringing, note that the Tier X ships will only be available through the Arsenal for credits.

For this first round, the rewards and missions will be as followed and can be completed an additional time during the next round:

It is finally here. Too soon of course because if you think that high tier Carriers will be less strong, you are seriously off to a certain surprise. Anyway, let’s explain how Carriers will work in this new version.

In this version, the RTS aspect was entirely traded for a more action based gameplay. You can only control one squadron at a time. You have to select which type of squadron you want to use with the keys [1], [2], or [3] and you have to press the key twice for the squadron to take off.
You will have 3 types of aircraft, Attack aircraft carrying unguided rockets, Dive bombers carrying bombs and Torpedo bombers carrying torpedoes.

As for the controls themselves, you control the squadron with the WASD keys (or ZQSD for the people using azerty keyboards) but you can also change their course with your mouse for some fine tuning when you are about to strike among everything else.

Now, for the aircraft carrier itself, the controls remain the same as classic warships so the WASD keys (or ZQSD for the people using azerty keyboards). You can only control one unit at a time and cannot switch between the carrier and the squadron. 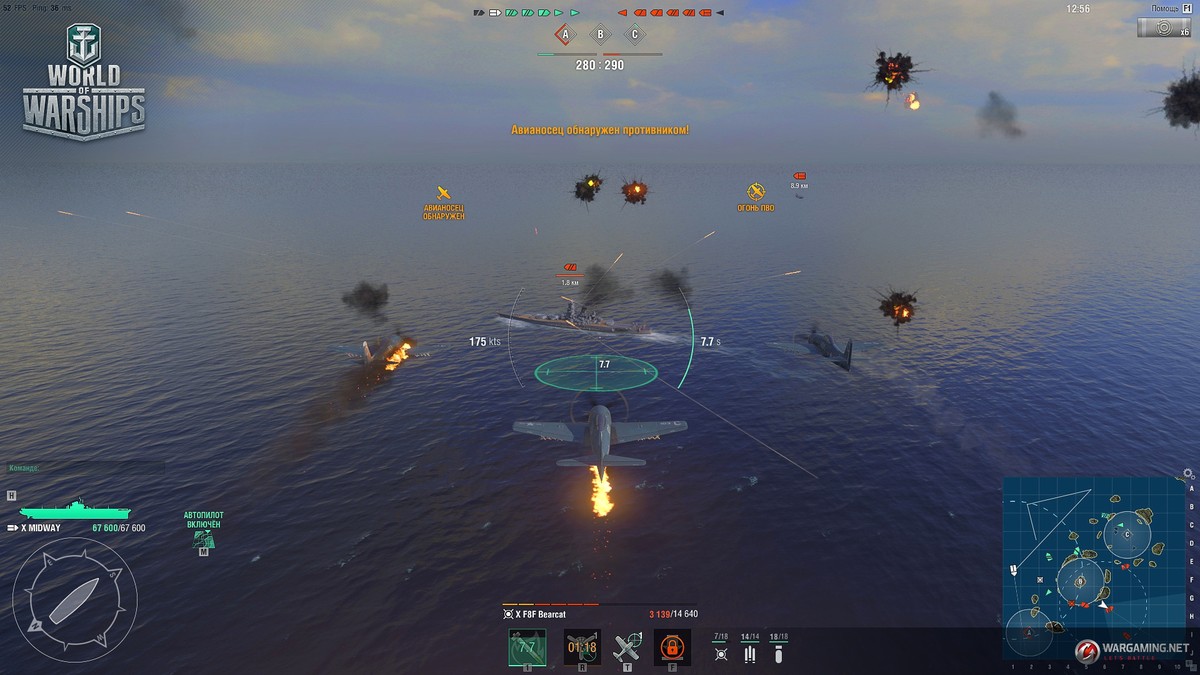 When you find a sweet target to attack, use the left click to switch to attack mode. You will not strike with the whole squadron but only with a few wings. Depending on your aircraft type, the aiming system will look different. You will see either an ellipse for rocket launch and bomb drop or the torpedo reticule for an attack with torpedoes.
The longer you will maintain course, the tighter the dispersion will be on your bombs, torpedoes or rockets. 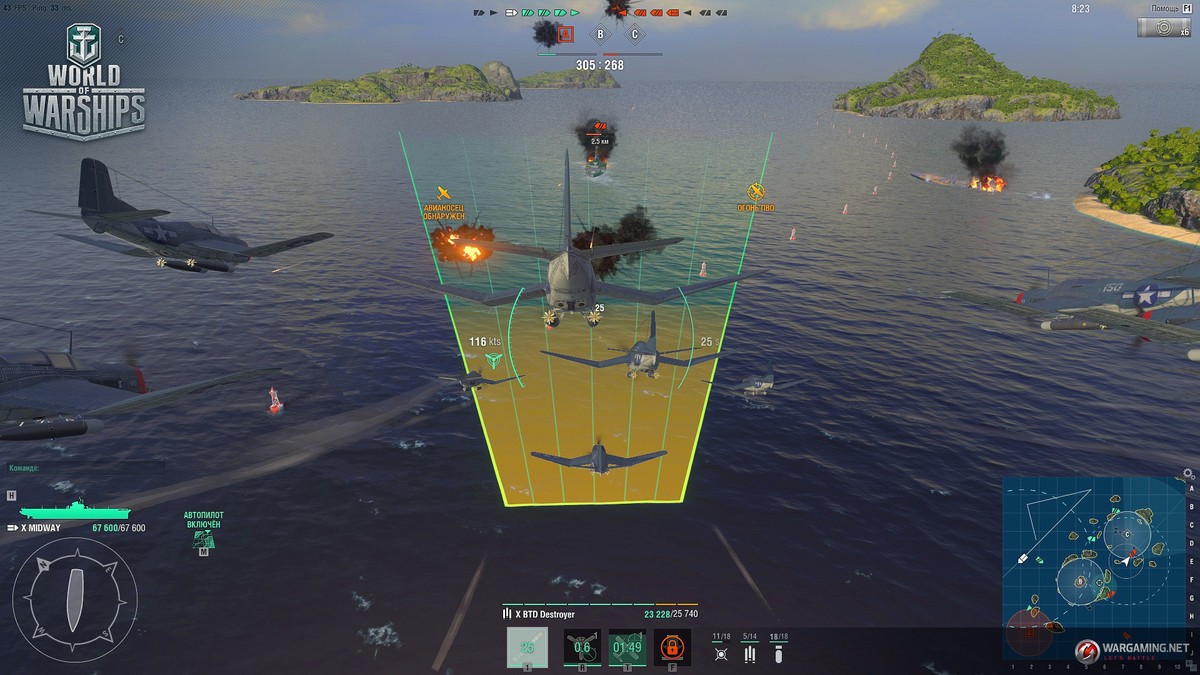 Once your attack is ready, use the left click again to release your payload. Just like when you are shooting with the main batteries on a surface combat ship, you will have to adjust the lead of the drop depending on the target speed and movements.

The anti-air mechanic also received an overhaul. The classification of anti-air guns, of course, remains the same with the 3 different auras (short-range, medium and long-range).

The planes now have an HP pool similar to the one of ships. the anti-air batteries will deal damage to the planes and by such reduce their HP pool until they are destroyed. Each plane has its own HP pool.
Now more specifically, the short-range anti-air will deal damage continuously to a random aircraft in the squadron until it is destroyed. However, the medium and long-range batteries while they also deal continuous damage to planes will also create flak clouds from the explosion of shells in the air. If any plane is hit by the explosion, it will receive important damage.
The interesting part is that these explosions can be avoided by actively maneuvering and changing speed. 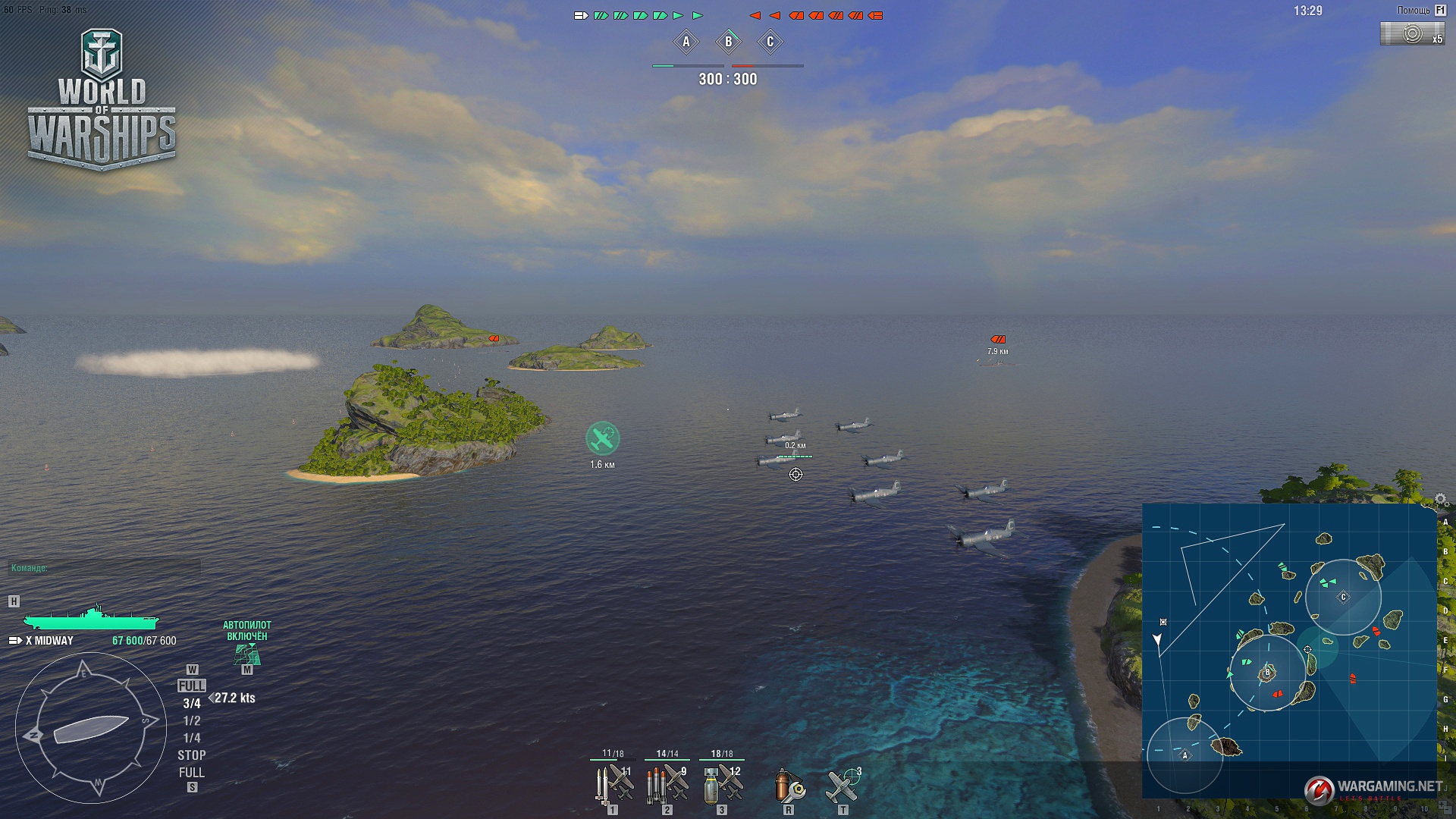 The fighters are now a consumable for your squadron. When the consumable is activated, a squadron of fighters will appear in the area after a short time and will patrol there for a certain period of time. Their patrolling area is visible on the mini-map in the form of a green or red circle depending on which team the Aircraft carrier who used it belongs to. The fighter squadron can destroy as many planes as there are fighters in the squadron. Also, the consumable Catapult Fighter was changed in a similar way.

Protection of the Aircraft Carrier 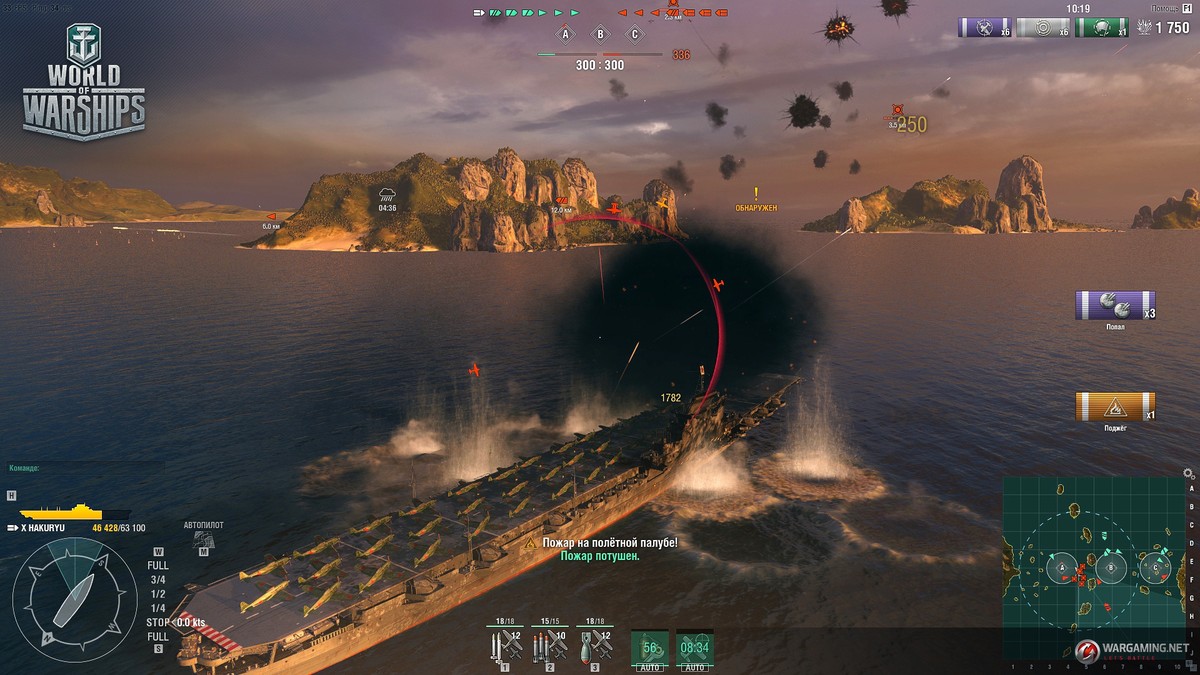 Multiple changes were made to the aircraft carrier defensive capacities.

First, fires now only last 5 seconds and flooding last 30 seconds. I will actually step in here and say that if a destroyer wants to engage one of the upcoming high tier British carriers, the player will break his/her teeth on this carrier.
Right now, the high tier British carriers are plated with 21 mm of armor which means that any HE shell with a caliber below 130 mm will not be able to penetrate this plating. Only the superstructure (and the bow as well as the stern for the Tier VIII ships) will be damageable by destroyers with a small caliber main battery. Basically, the only proper damage these destroyers will be able to deal to them will be with torpedoes if the carrier simply starts to run away fully angled. Then again, this is only in a supertest stage so their armor might be nerfed.

Following this, the consumables on the carrier will also activate automatically when needed to avoid the player from leaving the controlled squadron to take the necessary actions with the carrier.

Compensations for the rework

All the old premium carriers at Tier VIII will be replaced by their new versions and all the XP accumulated as well as the commander will be transferred to the new ship.

As for the Tier VII premiums Kaga and Saipan, they will be replaced by new Tier VIII versions and all the XP accumulated as well as the commander will be transferred to the new ship. 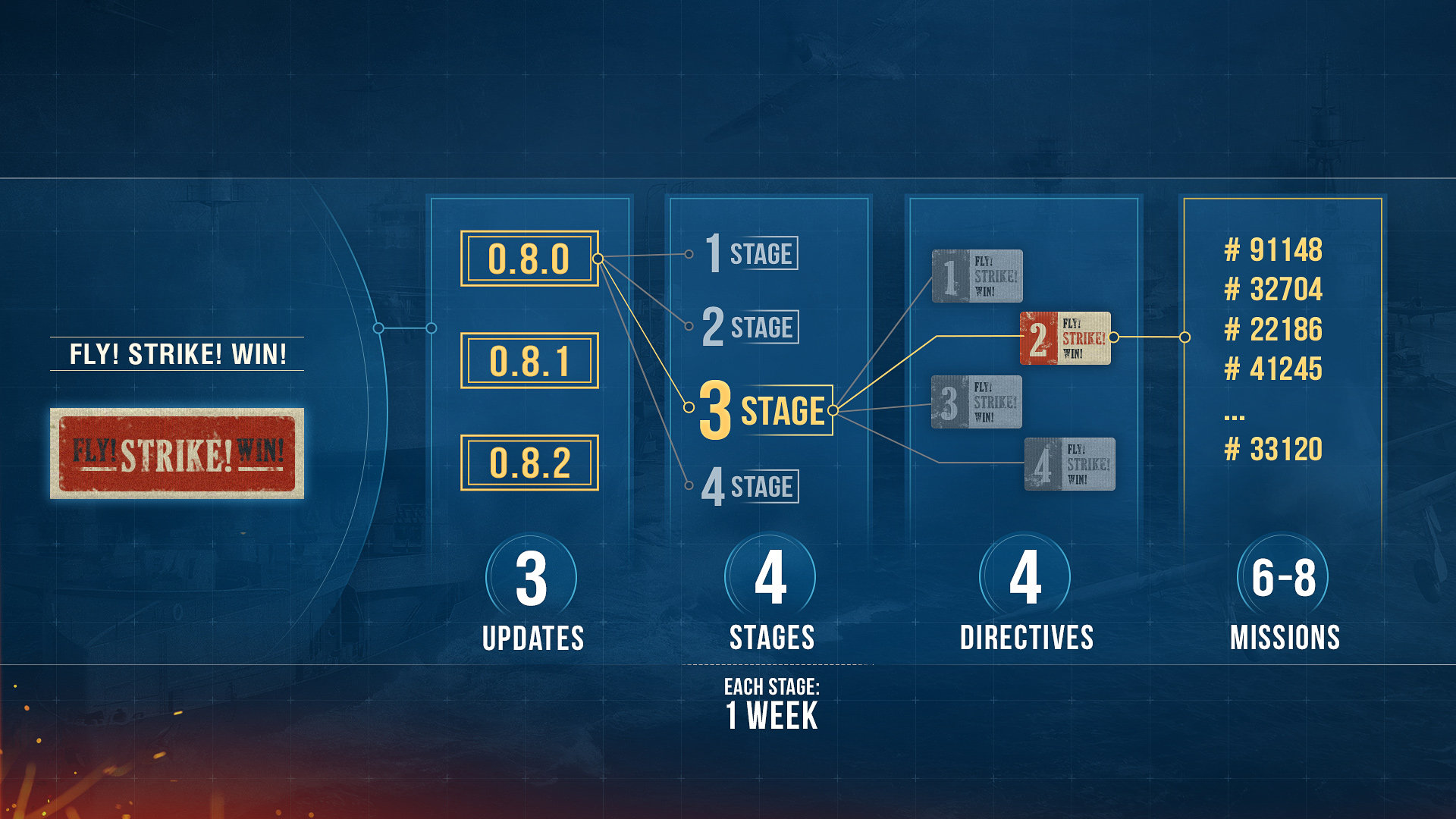 To invite people to play the rework aircraft carriers, a new special event was created called FLY! STRIKE! WIN!
This event will also be dedicated to the Lunar New Year and will be composed of 4 stages with various missions each time.
You’ll receive corresponding rewards for completing Stages, Directives, and missions: credits, consumables, camouflages, signals, Lunar New Year containers, and Coal.

These missions will be completable in Co-op, Random, Ranked, Clan, Scenario, and Special battles.

Here we go with the second big elephant in the room, the new ranked season. This season is quite interesting as it will be fought in 6v6 at Tier IX but not only because of this. This season will be played with the Arms Race mode that is finally coming back.
The game mode received several improvements in terms of visuals, the position of spawn of the different bonuses but also in the form of new bonuses.
Now, apart from familiar areas that decrease detectability, restore combat capability points, and accelerate reloading time, you will encounter three new areas that: 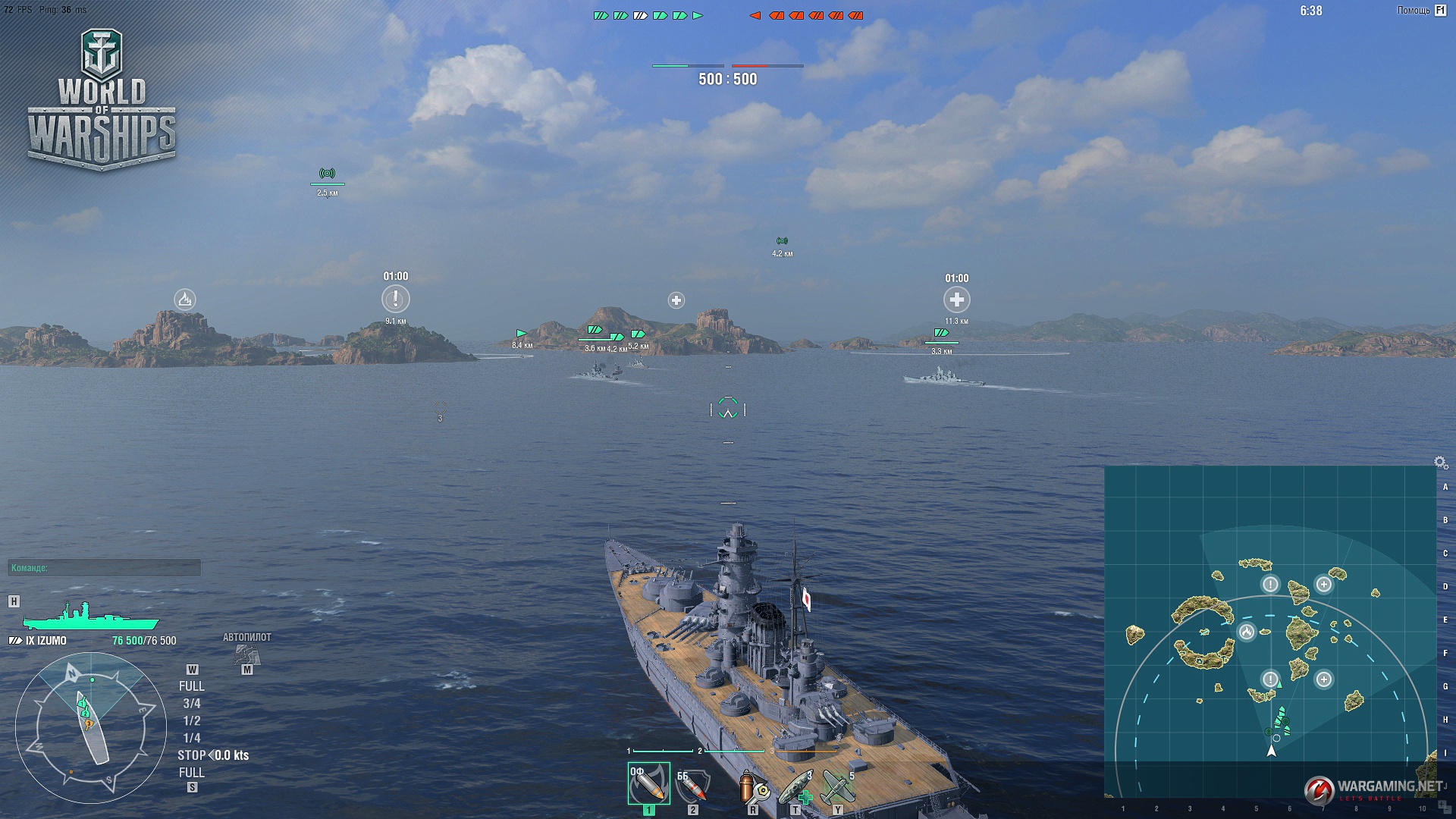 Bonuses work until the battle ends, and each of them has six levels that improve ship characteristics accordingly. We remind you that any allies within a range of 12 km from the activated area will get the same bonuses.

Ranked Battles will be fought on the following maps: Islands of Ice, Trident, Mountain Range, Warrior’s Path, and Sleeping Giant.

Also as a side note, remember that since this ranked season will be fought at Tier IX, there will be no carrier since all carriers will now be on even-tiers.

Finally, after the great success of the “Supply Lines” competition, a new version of it is coming with the update 0.8.0 under the name of “Naval Battle”.

If you’re a clan Commander or a Deputy Commander, you can enroll your clan and participate in the “Naval Battle”, where your clan will need to complete one common goal. After this, the clan will move to the next stage. Here you will compete against another clan and your task will be to outscore the adversary in terms of the number of stars earned. Each clan will have their own table, one for all players. Each cell in the table is a separate category representing a branch of researchable ships, and a Chain of combat missions is available for each of them. All combat missions carry the same condition: earn a specific amount of Base XP per battle. Your clan will be rewarded with a star for fulfilling the criteria.

The more successful your clan is in Battle, the more Oil it will receive.

Here is everything so far regarding the upcoming Public Test. If you plan on taking part, good luck out there and…. enjoy the CV rework I guess.