The American tech tree of cruisers will face a serious reshuffle. Update 0.7.5 will realign the tech tree of U.S. heavy cruisers, sending Cleveland to Tier VIII on the light cruiser fleet. Try out the new ships and find out more about the rules of replacement during the Public Test. The first round will involve the original tech tree of U.S. cruisers while the second round will see the heavy ships replaced and moved. Changes start at Tier VI where the traditionally expected

VI Cleveland will be replaced with

IX Buffalo—takes her place at Tier IX. The ship carries twelve 203mm guns with super heavy AP rounds, perfectly embodying the notion of a heavy cruiser in the game. Excellent damage from a full broadside, a decent pool of hit points, and a 27mm plating to protect the ship’s fore and aft ends. Add to it a vast selection of consumables, and the ship stands out as a formidable adversary in medium-range encounters with other cruisers and destroyers. 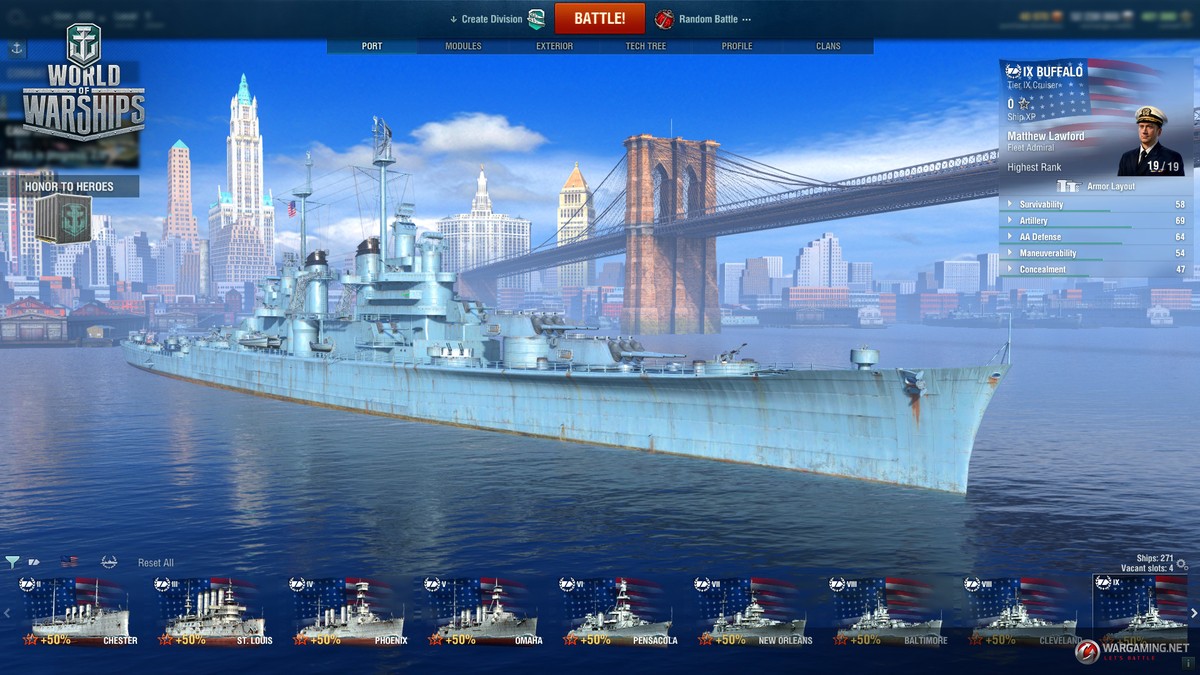 The parameters of ships shifted down the tech tree were readjusted accordingly, but their overall performance at their “new” tiers may turn out to be even better than that of their predecessors.

X Des Moines will continue to hold the reins at Tier X of the heavy line with a-lightning-fast main guns reload and outstanding AA defences.

VI Cleveland is taken two tiers up to her new place in the split line of light cruisers. We’ve improved the ship’s parameters by giving her faster main guns reload time and a higher turret traverse speed, more HP and an option to equip “Hydroacoustic Search”, “Surveillance Radar” and “Defensive AA Fire” at the same time. In Update 0.7.5,

VI Cleveland will be the only representative of the line of U.S. light cruisers. The other ships will join the fleet very soon.

Another major addition to the game that will come with the release of Update 0.7.5 will be a new permanent collection. It will be entirely dedicated to U.S. cruisers of various periods and the U.S. Navy in general. The collection will consist of 48 items divided into eight thematic subcollections. By completing those subcollections, players will be able to change the color patterns of standard camouflages applied to U.S. ships and mount a second flag. Collectible items will come in “American” containers that will be delivered to you for completing dedicated combat missions.

Once the Update goes live, American containers will give you a chance to get combat missions which, once completed, will land Premium ships like

VIII Kidd and the revamped researchable 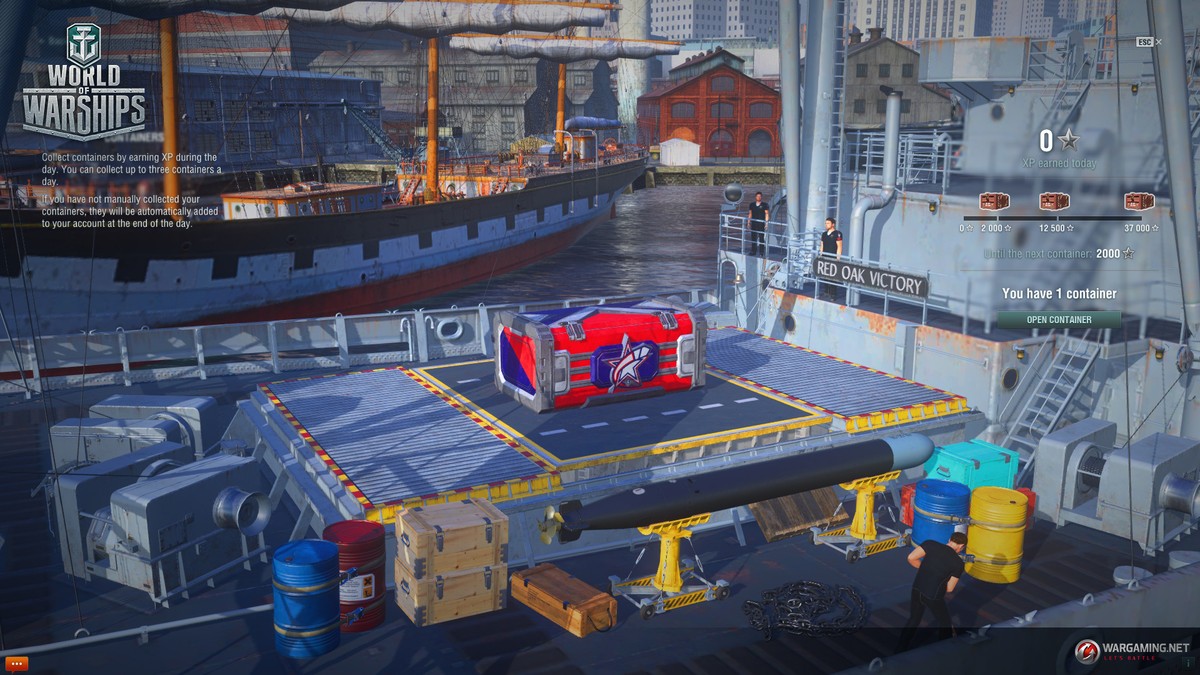 Subcollections and the new features they unlock: 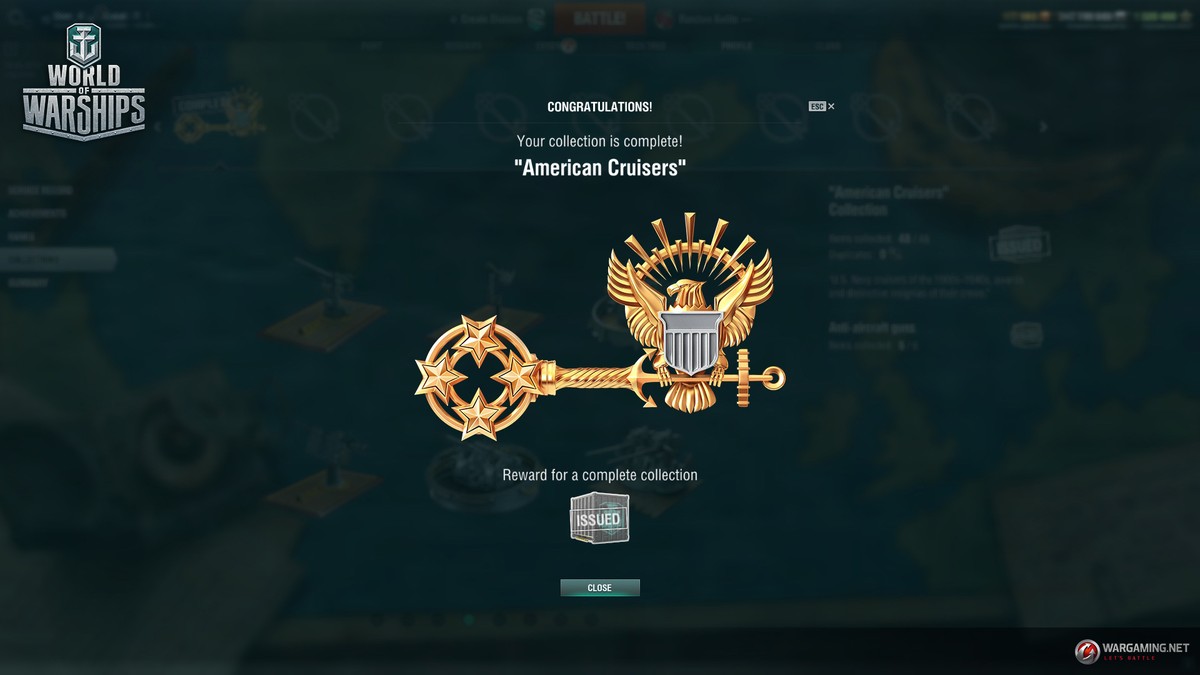 By completing the entire collection, you get a unique camouflage for cruiser Cleveland and a commemorative flag. 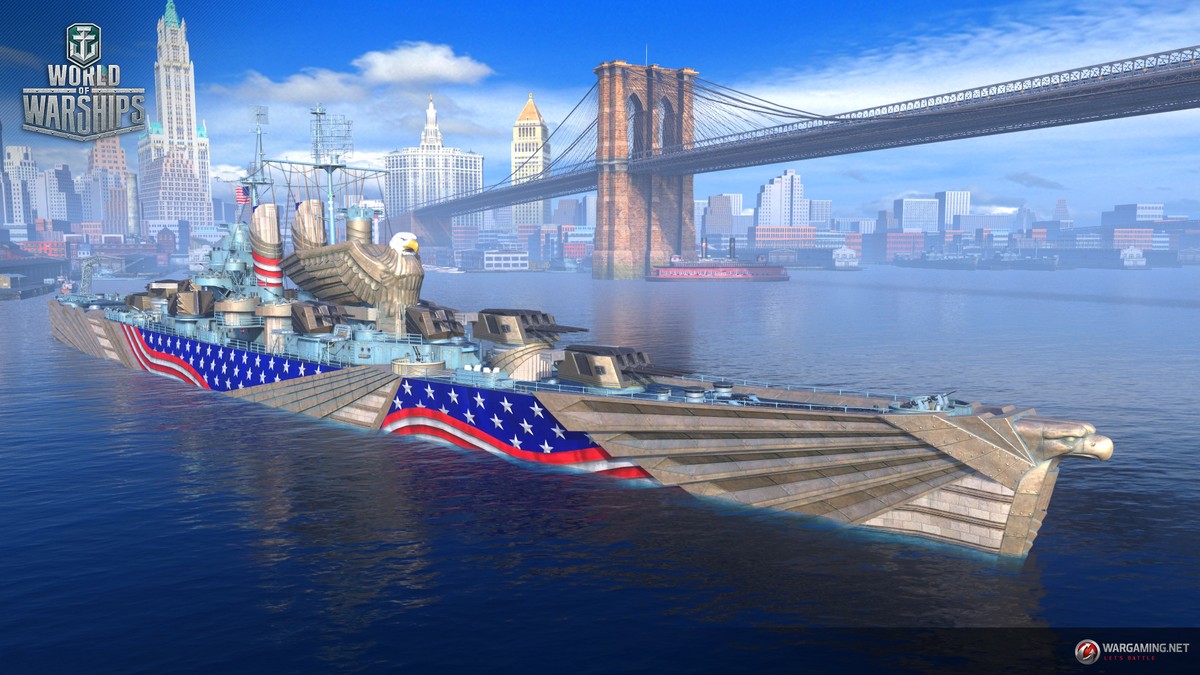 The new collection will come with a new permanent campaign. The name of the campaign derives from the Fleet Admiral William Halsey’s favourite byword, and that’s done for a reason: the campaign is dedicated to this renowned U.S. Navy admiral. In the game, he will be embodied in a unique American commander with enhanced skills and talents that can be obtained by completing the final task of the fifth mission. During the Public Test, you’ll be able to test Halsey in battle after you’re through with the final task of the third mission. 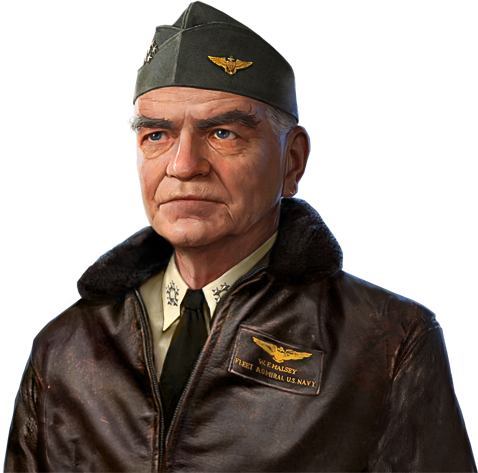 You’ll have a whole range of tasks with a variety of conditions available for you, including those that can be completed in Clan and Ranked Battles. Successful progression through the tasks will bring you many useful rewards, including an expendable “American” camo while the final tasks of missions (except Mission 5) will reward you with supercontainers. Just like in our other campaigns, stars will be issued for every completion of a given task while rewards will only be issued once. 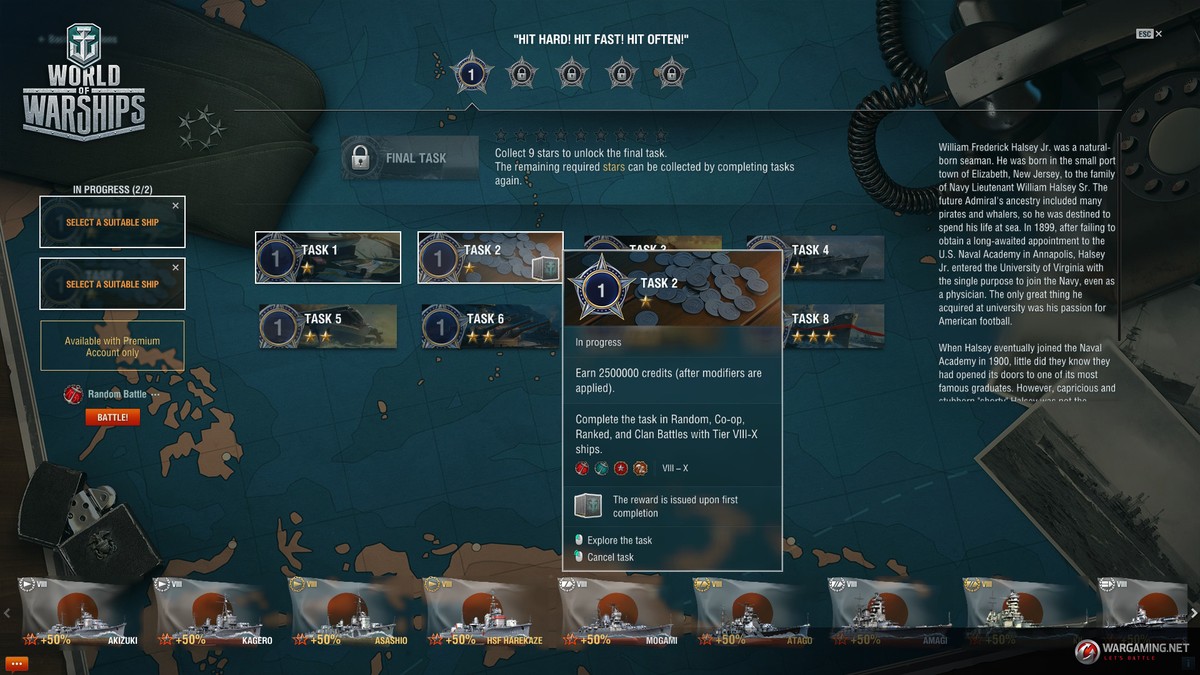 To join the campaign, you need to reach at least level 12 in your Service Record and have ships of Tier VIII or above in the Port. Certain tasks will require ships of a certain type and nation. Find out more in a dedicated article soon.

Complete the final task of the second mission during the Public Test to get Yamamoto Isoroku, a unique Commander that will obtain the “Expert Marksman” and “Preventive Maintenance” enhanced skills with the release of Update 0.7.5 in addition to the talents he already has. 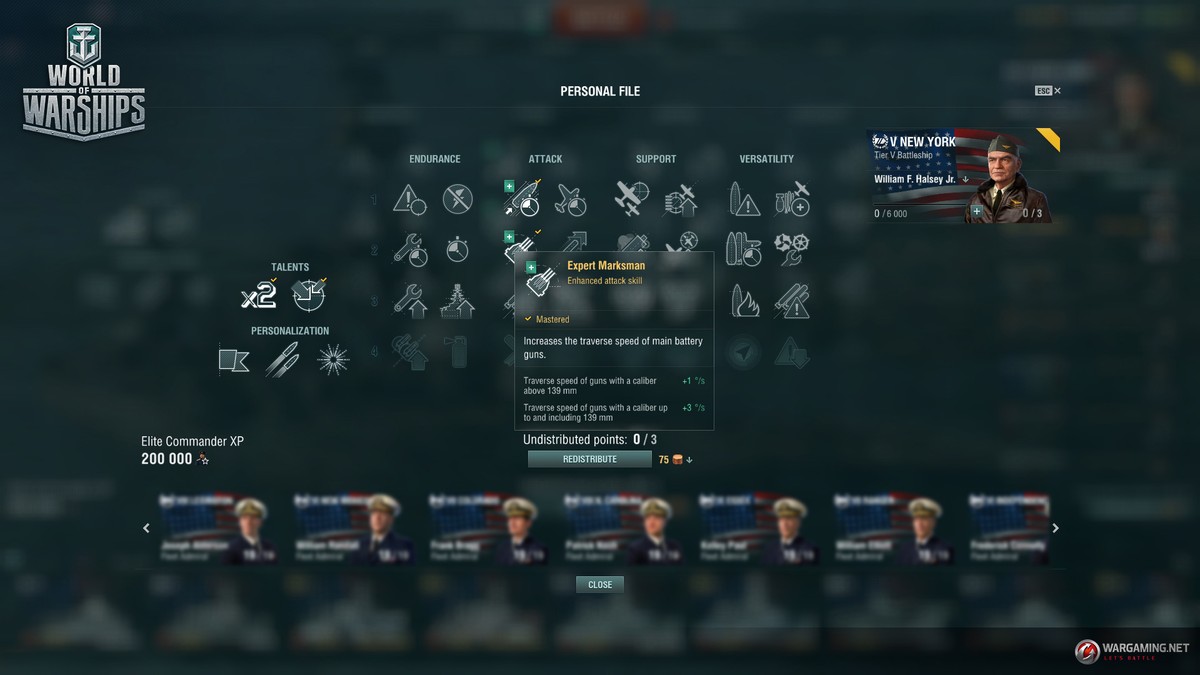 Please note that during the Public Test it will be noticeably easier to complete the new collection and pass the new campaign as compared to the efforts you’ll have to take to do the same on the live servers. Also, please bear in mind that the conditions of various tasks and rewards for completing them may differ substantially.

We continue to focus on the issue of providing players with maximum operative combat information. In the previous Update, we added ribbons for aerial bombs. This time, we’re adding a “Spotted” ribbon. The new ribbon will be issued when you spot a ship that is spotted for the first time or gets spotted again after remaining undetected for at least 90 seconds of battle time.

In response to numerous requests from players, a ship’s direction vector will now be displayed in the game. Now, once you are locked on a target enemy ship, the Minimap will clearly show the direction of that ship’s movement. By aligning your own vector and that of an enemy ship, you’ll be able to fire more effectively. 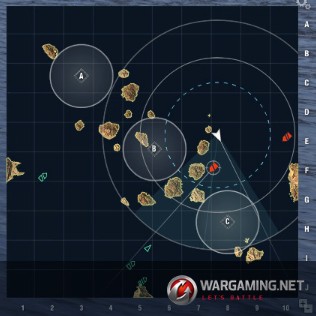 Work never stops to further enhance the in-game audio. This time, we’re adding additional sounds to ports. In many ports like Hamburg or Marseille we’ve added sound effects for planes flying across the sky and ships passing by. In the Black Sea port, we added sound effects for activities on the square. In the Philippines port, church sounds can be heard. These sounds will be available for “High” and “Ultra” audio presets when the “Play music in port” setting is off. All details about the forthcoming new audio features will be available in the full list of changes that will be released with the Update. Even on the Polar map, the aircraft flying up in the sky will have a new set of sound effects.

Don’t have a powerful PC configuration? Here is good news for you! The “Low” audio setting has been further optimized to release even more resources. With this option selected, ship engines will be silenced and ambient sounds will be turned off. The maximum effect will be achieved for PC configurations running a 32-bit operating system with limited RAM resources.

We’ve rolled out a minor update to the Unsportsmanlike Conduct Prevention System. Now, when a player’s torpedoes hit an allied ship, mirror damage will be inflicted on that player only after receiving an allied damage warning. Immediate infliction of mirror damage for torpedo hits occasionally resulted in situations when a team lost two players at a time, which apparently didn’t add to that team’s chances for victory.

Smoke screens will now be visible from all distances regardless of graphics settings or hardware configuration. Previously, the rendering sequence applied to smoke screens could be broken, making any deployed smoke invisible in the binocular view.