Ladies and Gentlemen, the French large cruisers will soon be released. For the occasion, it’s time to have a look at what we are dealing with and if they are worth grinding for.

As usual, I will only be covering the tier X of the branch, in this case, the incredibly ugly Marseille. However, I will also talk about the previous ships Cherbourg and Brest.

Soooooo… just like with every new branches now, the French cruisers will be first introduced through an early access event. Cherbourg will be obtainable for free as the final reward of a mission chain.

As for Brest, she will be available in the random bundles alongside Toulon. As you can see in the picture below, this time, there will be a grand total of 62 bundles to open with each of them costing 1 000 doubloons. I don’t think that I will be alone in saying it but… that’s a liiiiiiiiiiiiiiiiiiittle bit too many bundles. At least though, all the bundles outside of the Brest and Toulon ones give the same amount of tokens so there are only 2 important bundles to worry about. When it comes to Marseille, she will be available in the usual consecutive bundles that you can buy with the accumulated tokens, and obviously, she will require you to spend doubloons if you ever want to get the ship early. So… yeah, they are trying to squeeze us dry on this one.

In terms of Frankenstein Monster made in Wargaming, I think that Marseille takes the cake.

This ship is a big mishmash of the 17 500 tons battlecruiser design with a preliminary design from the Richelieu-class battleships. More precisely, Project 4. This early design had the same turret placement as the Nelson-class battleships but with 380 mm guns.

To this already odd mix, they added the same 330 mm guns as on the Dunkerque-class but that’s not all! They also decided to give it a fairly cursed secondary battery by taking the triple 152 mm secondaries from the Richelieu-class and then using 138.6 mm guns on them.
Last nail on the coffin, we are talking about a ship with armaments and design decisions from the mid to late 1930s. Why on God’s green Earth does it have a superstructure straight from the 1920s? It just makes no sense at all when at this period, you already had French ships appearing with more modern superstructure like the Algérie or the Dunkerque-class.

Long story short, it’s basically one of the worst designs Wargaming came up with so far.

In terms of in-game characteristics, Marseille is armed with some of the biggest guns in the game for a cruiser with all turrets located at the front of the ship. She suffers from a long main battery reload time and one of the worst cruiser dispersion but it is compensated by a Main Battery Reload Booster consumable.
Her armament is reinforced by a heavy secondary battery with improved dispersion similar to Massachusetts or Schlieffen.

The permanent camouflage of the Marseille provides the classic bonuses for tier X ships:

With the early access event, Marseille is also getting the Liberation camouflage that gives the same bonuses: 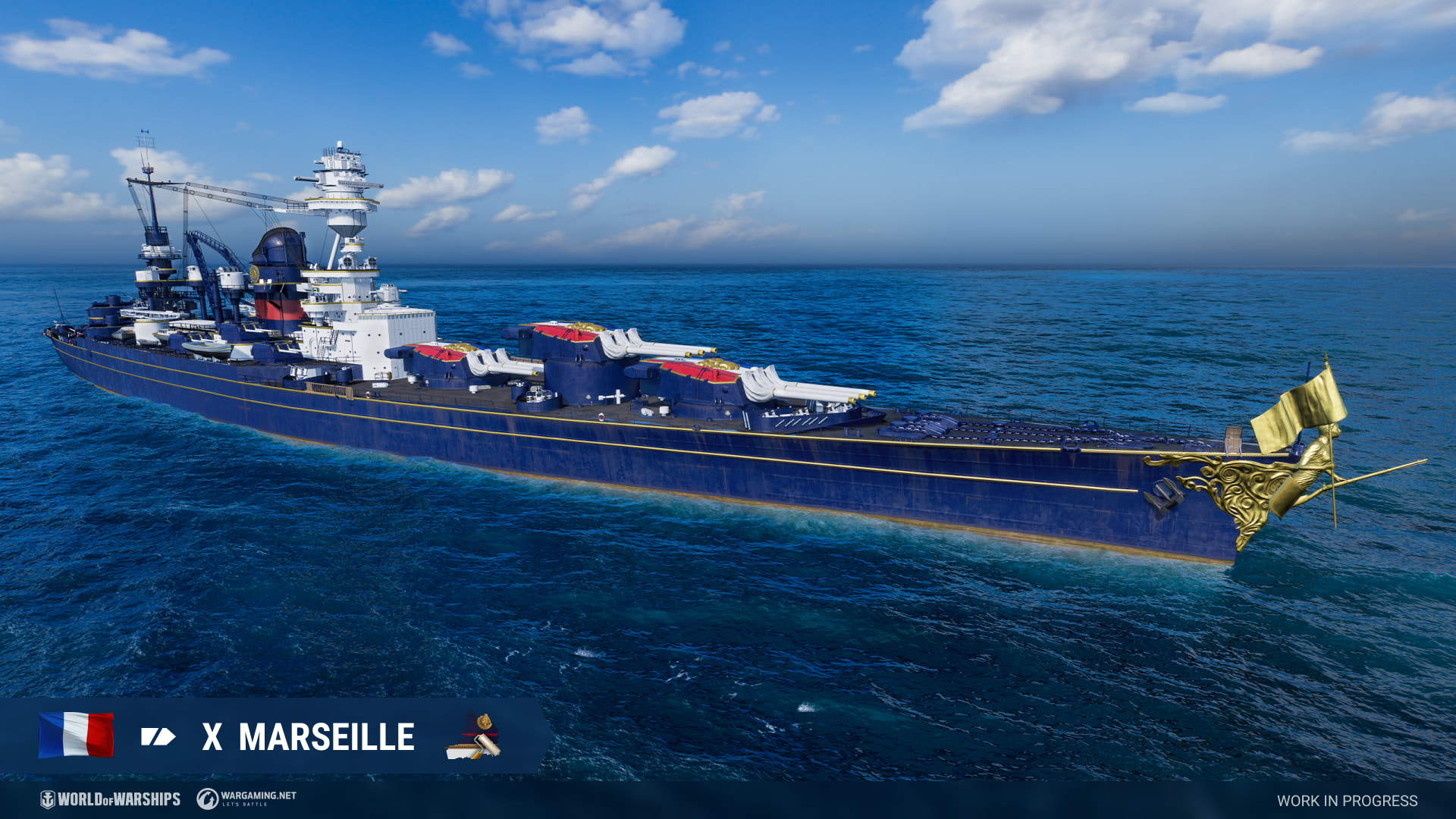 Marseille, as well as the other French large cruisers, is a particularly weird ship, suffering from an identity crisis. The ships are sitting in between the roaming, HE spamming gameplay of Henri IV and the more AP-focused and static gameplay of Stalingrad. While at the start, the ships were advertised as glass cannons with high firepower and low survivability, now they are more of a middle ground. For Cherbourg and Brest, you might even say that their firepower is actually below average. Cherbourg, with her 305 mm guns just doesn’t stand much chance against most tier VIII cruisers unless you get people flat broadside. Her main battery reload time is just FAR too slow. As for Brest, it’s already better because she gets the same guns as Marseille but she is still crippled by the long reload.

On one side, Marseille has great mobility with a tight turning radius, the capacity to stop and start in the blink of an eye with the French Engine Boost, and also good concealment to sneak around and get to advantageous positions. Coupled with that, the HE is very strong with high damage, penetration, and fire chances. The problem is that her capacity to wiggle around, kitting away, and go all gun blazing constantly is severely hindered by her turret traverse. Because it’s so slow (34.5 seconds once fully specced) compared to the turning speed of the ship, whenever you turn in the opposite direction of where you are pointing your guns, the turrets will not be able to stay on target, forcing you to either stop shooting or make a slower turn which could be dangerous. The other problem is that the ship has rather disappointing dispersion because of the 1.8 sigma and the high shell velocity.

On the other side, the ship has really potent AP shells that can punish broadsides, including battleships, quite easily. The main battery layout is also a massive advantage because you can pick around islands completely unspotted as the superstructure will still be behind cover. Another thing that helps the ship when you need to go into a more static positioning is the combined good armor with the 36 mm deck, small superstructure and the great firing angles. This allows you to maximize protection against AP and HE.

Fortunately, the fact that she has clear downsides in both playstyles doesn’t mean that the ship is bad. In fact, overall Marseille is a solid package and a good all-rounder for a damage-focused cruiser. She can perfectly burn down enemy ships because of the high alpha and fire chances of the HE while also being able to punish broadsiding ships. All that while still having appreciable tanking power, good concealment, and mobility. While I wouldn’t really see her in a competitive environment because other ships are just better for the whole damage dealing/tanking role, in random battles, she is definitely worth playing. I just wish I could say the same for Cherbourg and Brest…

Also, here are the post-battle results for those who would want them. As said previously, the main battery of Marseille has a lot of ups but 2 fairly massive downsides.

The first massive downside is dispersion. For whatever reason, Wargaming decided to give the French cruisers particularly low sigma with only 1.8 instead of the standard 2.0 or 2.05. Coupled with that, the shell velocity of the 330 mm guns leads to poor vertical dispersion. This makes it particularly problematic when dealing with destroyers as the shells will more often than you would like land everywhere except on the intended target. It is obviously also a problem when shooting at enemy ships broadside although the target is already a bit bigger.

The second downside is the turret traverse which just works in complete antithesis with the HE spamming/roaming part of the ship’s playstyle. It’s also particularly painful to deal with when doing aggressive moves as you won’t be able to both do fancy maneuvering and keep the guns on target because of the tight turning radius. Before you start wondering, I played the ship with the improved Grease the Gears of the Honoré brothers. I let you imagine how bad it is without it.

Now, once we go beyond the downsides, the main battery of Marseille is absolutely not to be ignored. To begin with, the ship uses the same guns as Dunkerque and Strasbourg. This means that she gets strong HE shells with high damage and high fire chances. Against cruisers and battleships, that HE slaps really hard on top of easily setting fires. If you see an enemy battleship using their Damage Control Party too early, do not hesitate to pop the Main Battery Reload Booster to get new fires going.

The AP is also very strong with high penetration and flat ballistics. In fact, her AP has the best penetration at tier X after Sevastopol and Stalingrad, being able to get citadels on battleships at close range relatively easily. Also, since you have 330 mm guns, you happily overmatch small light cruisers as well as British light cruisers. The secondary battery is actually pretty impressive. In total, you can bring up to 12 guns to bear and they get the same dispersion as on Schlieffen, Massachusetts, and such. They also get good firing angles, bringing in some much appreciated additional firepower, especially when fighting destroyers. The anti-air of Marseille is fairly decent. The long-range aura has high DPS compared to other cruisers, coupled with a high number of flaks. As for the rest, while the DPS isn’t impressive on either of them, it does end up stacking to some satisfying level.

The armor of Marseille is quite good for a large cruiser. Compared to other ships, the bow and stern present small targets, reducing the risk of enemy battleships getting big chunks of damage through them. At the same time, the middle section has a 36 mm deck that will prevent battleships from overmatching it and will also limit the damage taken from cruiser HE.
Finally, thanks to the thick belt armor and turtleback, the ship is very hard to citadel with cruisers and to some extent, also against battleships. Overall, if you can get passed through Cherbourg that is just bad, and Brest which is… decent but not much more, Marseille is definitely worth going for. While she suffers from that identity crisis as a middle ground between Henri IV and Stalingrad, her performances are satisfying.

Throughout all the games I played with the ship, except that one where I got shotgunned by a submarine, I truly cannot say that I had any bad experience. I just wish her turret traverse wasn’t so bad but it is what it is. So yeah, that’s a ship I consider worth grinding for, at least in randoms.

After discussing a bit with other people, I realized that the build used in the replay was less than optimal. As such, here is the build I recommend for Marseille: I cannot stress this enough when I recommend using one of the Honoré brothers with the French large cruisers because you really need the buffed Grease the Gears.

This concludes my review of the Marseille. Thank you for reading this article!