During Season 1, Clan Battles will be fought at Tier X. We’re using the 7v7 format with each team having only one battleship and no carriers. When the season starts, any player that has played a Random or Clan Battle with a Tier VIII-X ship after Update 0.6.12 goes live will get a set of three special Tier X ships for temporary use: Japanese cruiser Zao, Japanese destroyer Shimakaze, and German battleship Großer Kurfürst. In Update 0.6.13, German cruiser Hindenburg, Soviet destroyer Grozovoi, and U.S. battleship Montana, and in Update 0.6.14: Soviet cruiser Moskva, U.S. destroyer Gearing, and Japanese battleship Yamato is planned to be implemented.

There will be four main leagues in the Clan Rating system, each divided into three groups.

The Squall League is where you encounter the first signs of bad weather, when the waves are not that dreadful yet already gaining force, and the wind seems fresh and soft, but you’d better stay alert – it’s just the beginning!

The Gale and Storm Leagues that follow each other designate differing wind forces. A “gale” is a wind in the range of 7 to 8 with 7- to 8-meter high waves and a wind speed of up to 20 m/s! This mark designates the Gale League.

A storm is a wind in the range of 9 to 11 with raging sea, waves as high as 16 m, and a roaring wind of up to 32 m/s. The last but one – Storm – League is where you’ll have to battle really hard to stay afloat.

The Typhoon League, the ultimate league for the most powerful Clans of seasoned sea wolves. The name Typhoon came to us from Ancient Greece where is it was used in respect of a monstrous storm-giant that was the source of devastating storms with giant waves and wind speed in excess of 32 m/s! It’ll take guts to face off the enemy and hold your ground in a league like this. Not everyone can do that.

Any Clan willing to take part in Clan Battles will start from Group II of the Squall League with zero Rating points. It’ll be the starting position for all Clans. Clans will get Rating points for a victory and lose Rating points in case of a defeat.
On average, this amount will be equal to 25 Rating points. If a battle ends in a draw, your Division will get zero to minus two to minus three points. 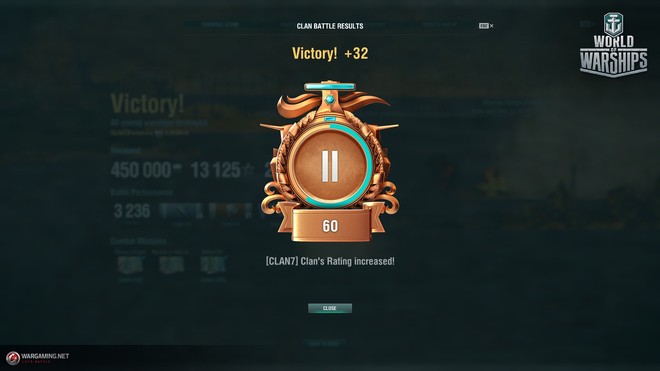 To proceed to the next group, a Clan will need to earn more than 100 Rating points in its current group. Any number of Rating points higher than 100 will be credited to the Clan in the next league.

After the Clan has successfully made it through all three groups in the league and got to the top, the Progression Battle series become available. The Clan will have to prove that it deserves the right to be promoted to the next league by winning three out of a series of five battles. Once three victories are secured, the Clan will be moved to the new league along with a tiny bonus of 35 points. On the other hand, three defeats will mean staying in the same league and a loss of 35 Rating points.

Example: The “CLAN” clan has climbed to the highest place in the Squall League with 100 Rating points in Group I. The Progression Battle series becomes available to it. The first battle was not very successful for the Clan and they suffered a defeat. The next battle ended with a victory which was then followed by a defeat. But the next two battles turned out to be a success, and the Clan prevails twice in a row. Three victories against two defeats, and CLAN gets promoted to Group III of the Gale League with a bonus of 35 Rating points.

At the same time, situations when things go wrong are not uncommon, either. Any Clan that has fallen to the bottom will have to struggle hard to avoid relegation. If this is the case, the Clan will have to play a series of Relegation Battles. Win three battles and keep your position in the league with a minor bonus of 35 Rating points. But if you lose the battles, you’re going down to the immediately preceding league, losing 35 Rating points.

Example: The “CLAN” struggled desperately in the Gale League but, alas, failed to hold their position. The number of points in Group III went down to zero, and CLAN will now need to prove that they deserve to stay in the Gale League. Time for Relegation Battles! The first battle ended with a victory, but the second one was lost. The third battle brought a win again but the subsequent two encounters ended with a defeat. Two wins against three defeats, and CLAN has failed to maintain its position in the current league and is relegated to Group I of the Squall League, losing 35 Rating points on the way.

If you have reached Group I of the Typhoon League, the 100-point limit on the number of Rating points will be lifted for your Clan and you’ll be able to earn as many points as you can in pursuit of ultimate supremacy.

In Clan Battles, you get rewards for securing a certain number of victories in each of the Leagues.

To claim your reward for reaching each of the leagues, you need to secure a certain number of wins. Be mindful, however, that only those battles will count towards each task that you win while being with your Clan rather than battles won by your Clan in general.

Win 7 Clan Battles while being in the Squall League or in any of the succeeding leagues.

Win 7 Clan Battles while being in the Gale League or in any of the succeeding leagues.

Win 8 Clan Battles while being in the Gale League or in any of the succeeding leagues.

The task will be available only after the Gale League #1 is complete.

Win 7 Clan Battles while being in the Storm League or in any of the succeeding leagues.

Win 8 Clan Battles while being in the Storm League or in any of the succeeding leagues.

The task will be available only after the Storm League #1 is complete.

Win 15 Clan Battles while being in the Storm League or in any of the succeeding leagues.

The task will be available only after the Storm League #2 is complete.

Win 7 Clan Battles while being in the Typhoon League.

Win 8 Clan Battles while being in the Typhoon League.

The task will be available only after the Typhoon League #1 is complete.

Win 15 Clan Battles while being in the Typhoon League.

The task will be available only after the Typhoon League #2 is complete.

Collect 3 of these Seasonal Unique Commemorative Flags by participating in 3 Clan Battle seasons to earn a special award; an exclusive Tier X Cruiser Stalingrad ! We might think of other ways to receive this ship in future, but right now it’s the only option to get her. Be among the first to claim this formidable ship!

Each tasks may only be completed once during the entire season.

Aside from that, various achievements are available for all Clans for participating in Clan Battles. Achievements will be issued for playing seven battles in each of the Leagues.
We’ll offer a separate achievement for those who climb on top of the Typhoon League.

When the first season is over, the Top 1 Clan of the season receive an unique battle loading screen to commemorate their achievement. 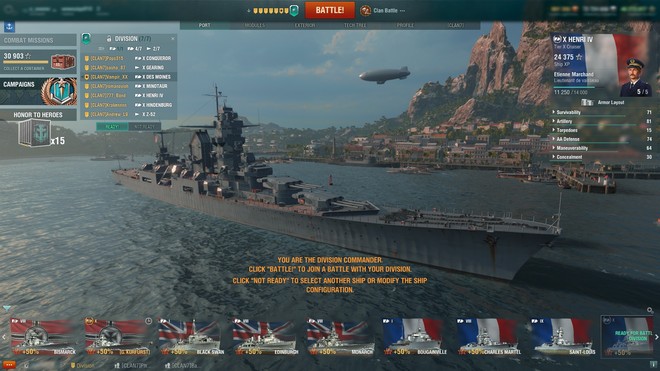 Please note that Divisions for Clan Battles may be assembled using the standard interface in instances when the relevant mode is selected in the “Battle Type” section.
A Division may be assembled by a Clan’s Senior Command staff (except officers) with Level 15 in the Service Record. Any clan member can enter that Division.

Several Divisions from the same Clan may be in the queue for battle at the same time. The results of every battle will be applied to a Clan’s Rating consequently after each of the ongoing battles involving the Clan’s Divisions is over.

We have also implemented measures to avoid unsportsmanlike conduct in battles.

If a battle lasts for less than four and a half minutes, players on both Divisions receive zero EXP and zero Credits for that battle. All Divisions in respect of which this ratio is applied during a battle for the first time will be kept under scrutiny and their battles will be subject to frequent reviews, just like battles involving all Clans with battle duration times close to that value. If a Clan is subject to an unsportsmanlike conduct penalty again, it will be banned from Clan Battles.

In Clan Battles, we apply the same standard protection against AFK players as in other battle modes. Players that fail to inflict damage to enemy ships and cover the minimum required travel distance will have their battle EXP and Credits reset to zero. We’ll also charge such players for the ship servicing and ammunition costs.

The economy is tweaked to make sure all players within a Division receive the same amount of resources. For a win, Divisions receive a lot more than in Random Battles while a defeat brings a lot less.

For a victory, each participant of a Clan Battle receives 2,500 base EXP and 300,000 Credits (before all modifiers are applied). By winning a Clan Battle with a ship carrying standard consumables and given the average cost of ammunition at 20,000, you will receive 100,000 Credits, or lose 50,000 Credits in case you lose a battle.

For a defeat, every participant of a Clan Battle gets 250 base EXP and 150,000 Credits (before all modifiers are applied). In a draw, both Divisions get the same amount of EXP and Credits as in a defeat.

Players will receive signal flags and Oil for every victory in Clan Battles. Thirty barrels of Oil and two of each of the following signal flags will be credited to players’ accounts for three winning battles a day: Victor Lima, Juliet Whiskey Unaone, India Delta, India Yankee, Sierra Mike, and Juliet Charlie. For more details, please refer to the Combat Missions section. Apart from that, for the duration of the entire season, an additional challenge will be available for players to get a Free EXP + 300% bonus.

Once you’ve played your first Clan Battle, you get five of each of the following signals: Ouroboros, RedDragon, Dragon, Hydra, and Wyvern right after that battle is over (a one-off task with the signals issued only after you play your first battle this season irrespective of your final result). All players can have a go at a string of in-game combat missions to get enticing rewards.