Ladies and Gentlemen, I salute you. Today, we will be covering the upcoming Italian battleship, Giuseppe Verdi. The ship will be available starting from the 23rd of December and it’s time to get a little bit controversial. Yes, I know, the article barely started.
She will only be available in the Armory for 19 300 doubloons or in the Premium shop with the cheapest bundle that will be at 63.49€ like the rest of the tier IX ships. You got it right, she is a pure premium and is not available for Coal, Free XP, Steel, Research Points or even Copium. With that in consideration, is the ship worth it? Is her secondary battery strong enough to compensate for an underwhelming main battery and justifies paying hard cash for it? Here is my opinion on this. Just like Marco Polo, Giuseppe Verdi is inspired by the design UP.41. from Ansaldo. 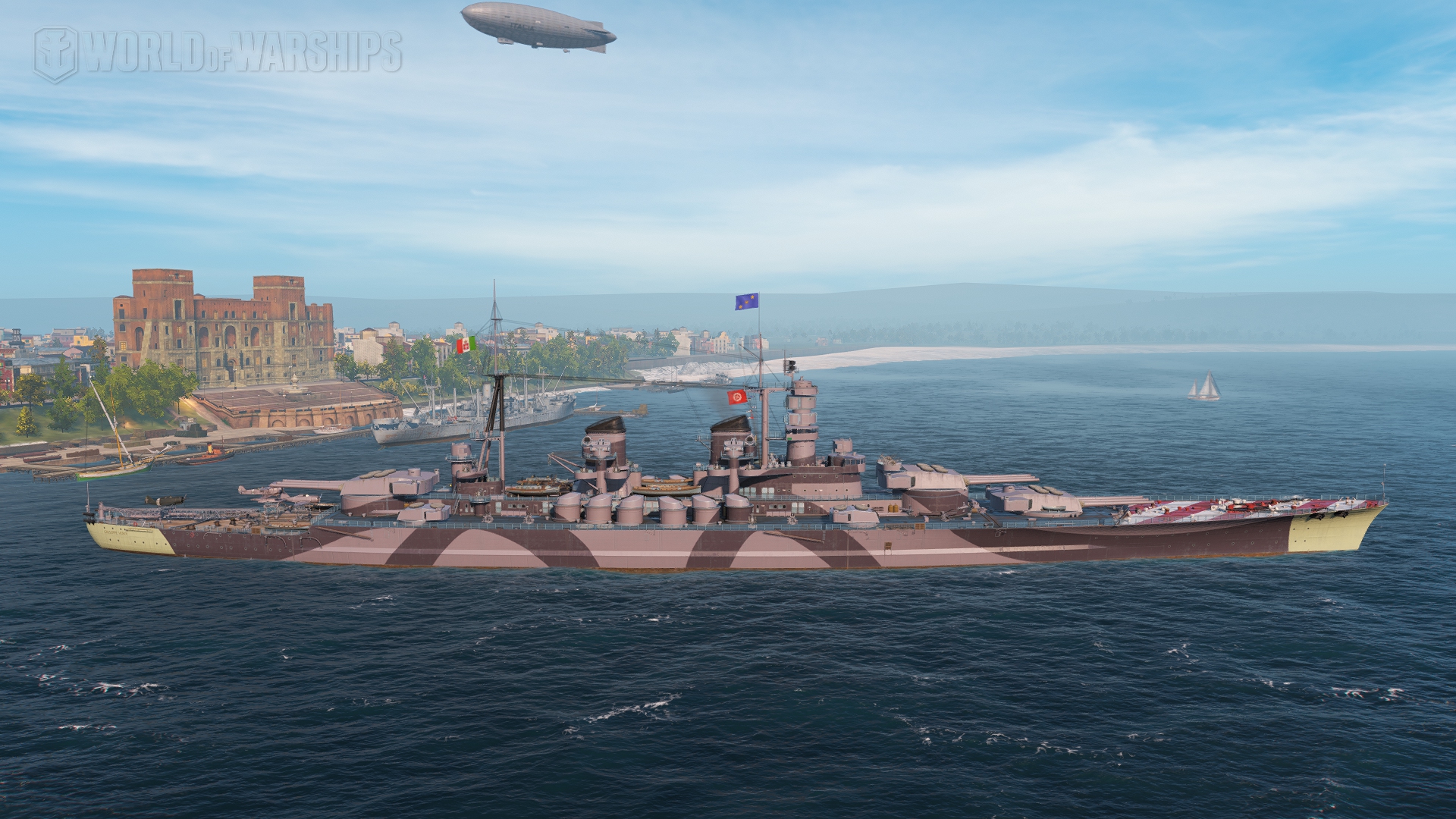 The permanent camouflage of the Giuseppe Verdi provides the classic bonuses for tier IX ships:

When it comes to her design, Giuseppe Verdi was basically brute-forced into becoming a mid/close-range, secondary-focused brawler. Not just because of her secondary armament but mostly because her main battery is just miserable with the high dispersion and low sigma.

When it comes to her capacity to brawl and get her secondaries in action, she does it quite fine, even with the secondaries being only able to reach a range of 10.5 km. The fact that the secondaries are firing SAP shells gives her a good capacity to deal damage to the enemy thanks to the high penetration.
The ship also has a special trick up her sleeve in the form of the Exhaust Smoke Generator that gives her the ability to go gun blazing with her secondaries while remaining undetected. This turns up to be a really effective combination. The Exhaust Smoke also allows you to try going for a drive-by on an enemy battleship but again, you need to pray that your dispersion won’t screw you up. Otherwise, unless it’s to punish a flat broadside ship that you can nuke, avoid using your main battery while in smoke and let the secondaries do the job.

If you want to see the ship in action, here is a replay of one of my games with it: The main battery of the Giuseppe Verdi is… a proper mess. For the starter it combines both a terrible dispersion, may it be horizontal or vertical because of the high velocity of the shells. On top of that, the sigma is only 1.7. Basically, get yourself ready to see shells going everywhere except on their intended target. At long range, especially when using the Spotting Aircraft, you are just gonna wash the target with seawater because the shells will rain everywhere around it. As if it wasn’t enough, the reload is also slightly higher than average at 31 seconds.

When it comes to the HE, it’s fairly decent. In line with U.S. or Soviet 406 mm HE rounds in terms of damage and fire chance. If needed, it can be useful against destroyers (if you hit them).

The AP is pure rage-inducing. The penetration itself is on the higher end of the spectrum among other 406 mm AP shells. The problem is that with the high velocity of the shells, you get overpenetrations constantly. It’s incredibly frustrating considering that, to begin with, the dispersion is bad. The secondaries are the money maker of Giuseppe Verdi and that is in every sense of the word. Similar to Napoli, her secondaries all fire SAP shells with the 152 mm shells having really good ricochet angles. Even considering the standard dispersion, thanks to the volume of fire, they end up doing some serious damage.

In the case of the 90 mm secondaries, you might think that the 26 mm penetration makes them questionable against battleship but it really isn’t the case. The thing is that since they have trebuchet-like ballistics, they will more often than not hit the superstructure. They are also easily able to shoot over islands.
As for the 152 mm, they hit hard and will be able to deal with a large variety of targets thanks to the 42 mm penetration.

Overall, while the ship loses in terms of reliability due to the standard dispersion, she is able to compensate with the volume of fire. The anti-air of Giuseppe Verdi is overall pretty bad with the combination of short firing range and average at best DPS.

Giuseppe Verdi has the same armor protection as Marco Polo. While the ship tanks very well and angled, you need to be careful to not give broadside to enemy battleships. Her citadel is quite vulnerable. So overall, what should we make of this ship?

Personally, I just hate it. The main battery being so unreliable pisses me off far too much. However, I cannot deny that the Exhaust Smoke Generator and secondaries combination proved to be quite fun to see in action and also genuinely effective against targets that wouldn’t go bow-in to me.

In the end, I think that it’s really down to a personal choice. I know that some found it fun to play but to me, it just doesn’t work at all. The main battery’s firepower was nerfed way too hard to push people into playing this ship with a secondary build. Compared to a Massachusetts or German battlecruisers that still retain acceptable main batteries, here, it’s just an absolute mess.
Personally, would rather refuel my car at maximum capacity with that money than spend it on this ship.

For the Giuseppe Verdi, I recommend the following commander build and upgrades:

Luigi Sansonetti isn’t really recommended here unless you never plan to grind the Italian battleships as they need a completely different build than Giuseppe Verdi. This concludes my review of the Giuseppe Verdi. Thank you for reading this article!