The A-44 line taught you little about the tank that you will be playing at Tier X. Having mastered the ins and outs of rear-turreted mediums at Tiers VII–IX, one would naturally expect similar gameplay at the top. But instead, you were treated to a classic close-range MT, which caused a lot of frustration and seriously undermined the line’s popularity. It was quite a bumpy ride, so it’s not surprising only a few people wanted to go down this line.

What could possibly convince you to give it a second chance? Perhaps, giving it the very thing it lacked in the first place: consistency. Update 9.22 does it by moving the Object 430 down to Tier IX, where it forms a mini-line of well-armored assault MTs with high alpha.

Debuting at Tier X is a completely new tank: the Object 430U.

Being a smaller target with decent mobility and quite the angled armor, this newcomer can easily flank an opponent, take them out with its impressive alpha, and move on to the next one unscathed. 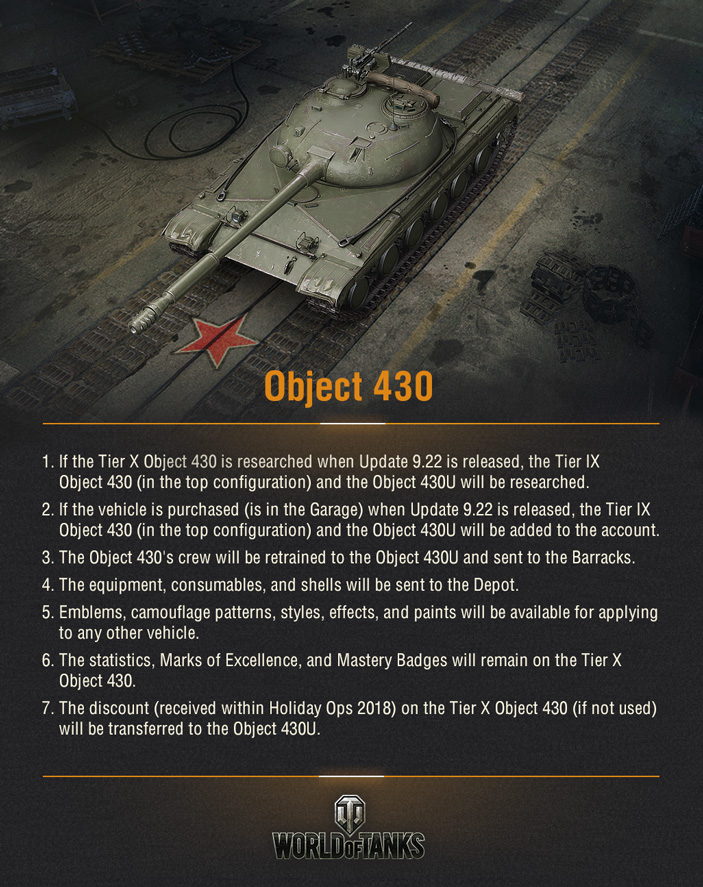 The rear-turreted trio will eventually get a new Tier X, too. It will continue the line’s legacy of tough turret armor, offering gameplay that feels like a natural progression from the Object 430 Variant II.

For quite some time, Brits and Germans were the only nations to treat you to Tier X HTs with rear-mounted turrets. Some enjoyed them, others would rather go with a more conventional option instead, but few would argue that the FV 215b, Pz.Kpfw. VII, and the Global Maps darling VK 72.01 (K) were dull. This bunch welcomes a very Soviet reinforcement in Update 9.22, introducing a fresh take on the classic IS design at Tiers VIII–X (straight up from the IS).

Pointing their pike noses towards enemies, the IS-M, Object 705, and Object 705A sport the nation’s trademark alpha, partially offset by aiming parameters. But that’s not the case in point. The rear turret placement is. Combined with tough armor, solid-for-their-class mobility, and powerful guns, it lets them push around other tanks, no sweat.

Play to their strengths, and they’ll prove handy in supporting an attack or effectively killing the enemy breaking through. They fight like a blend between the Pz.Kpfw. VII and the IS-7, and this gameplay doesn’t change as you move up the tiers. The firepower does though, from a 122-mm gun at Tier VIII to a whopping 152-mm when you make it to the Object 705A. 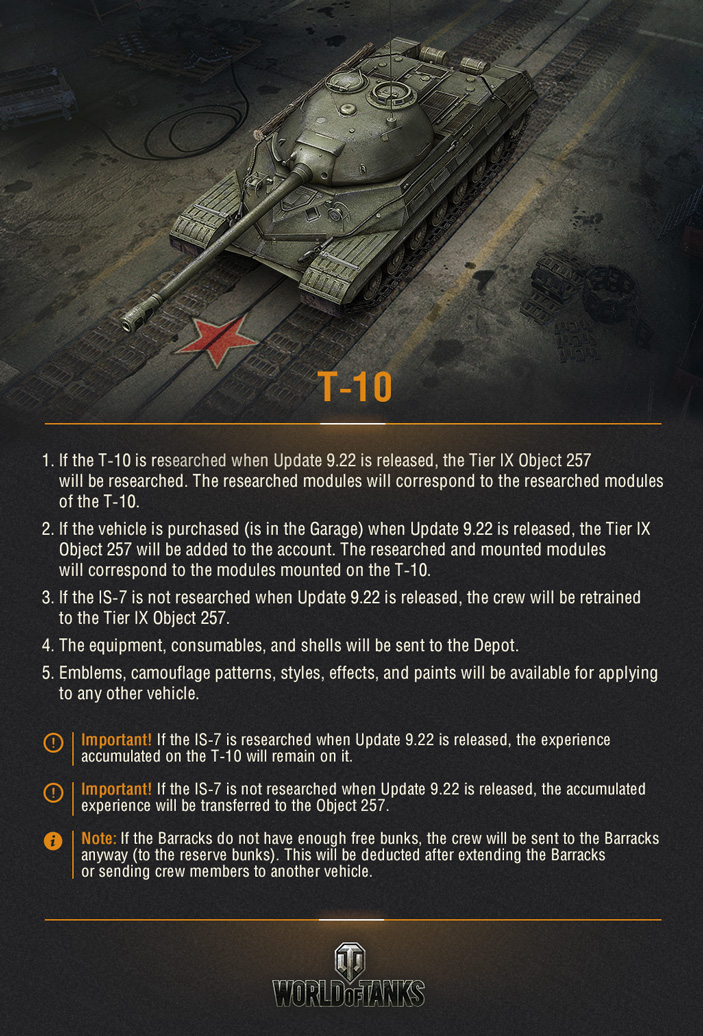 Swift and thick-skulled, the T-10 is often seen on battlefields, quickly changing its course and raining destruction on its way. However, as great as it is, it didn’t fit well between the durable IS-3 and IS-7 and therefore gets replaced with the Object 257. Don’t worry, we aren’t removing the T-10 altogether. It’s proven its worth far too many times over the years, so it gets a mini-line to itself and a Tier X vehicle that feels like a tangible step-up from it. We’re still working on this newcomer and will reveal it to you further down the road.

We’ve been trying to bring this TD bunch back to relevance for quite a while now. Simply tweaking vehicle parameters in Update 9.20 took us nowhere. We were fully aware of the problem and designed a new solution, which is reworking the line into mid-to-close range assault TDs.

Reshaping the line off this concept called for a set of structural and balance tweaks. We started by moving the Object 263 down a tier, where it can make a sensible contribution with its damage per shot and armor. The next step was designing the right vehicle for Tier X, and we picked the Object 268 Variant 4 for this role. It inherits the speed, armor and good gun from its predecessors, but unlike them, it can mount a gun above 130-mm, doesn’t suffer from an open hatch, and dishes out 650 damage per shot.

The Object 263 and Object 268 Variant 4 showed excellent results in the tests. The vehicles perfectly blocked the damage and performed as assault TDs—fast, armored with an average damage per shot and not very big DPM for TDs. However, you spoke out against moving the Object 263 to Tier IX and we couldn’t ignore it. So we took them both for another round of testing to verify the initial results. The Object 263 remained untouched, but we reduced the Object 268 Variant 4 alpha strike from 750 to 650 to eradicate the abrupt change in alpha damage and reload time between Tiers VIII and Tier X. 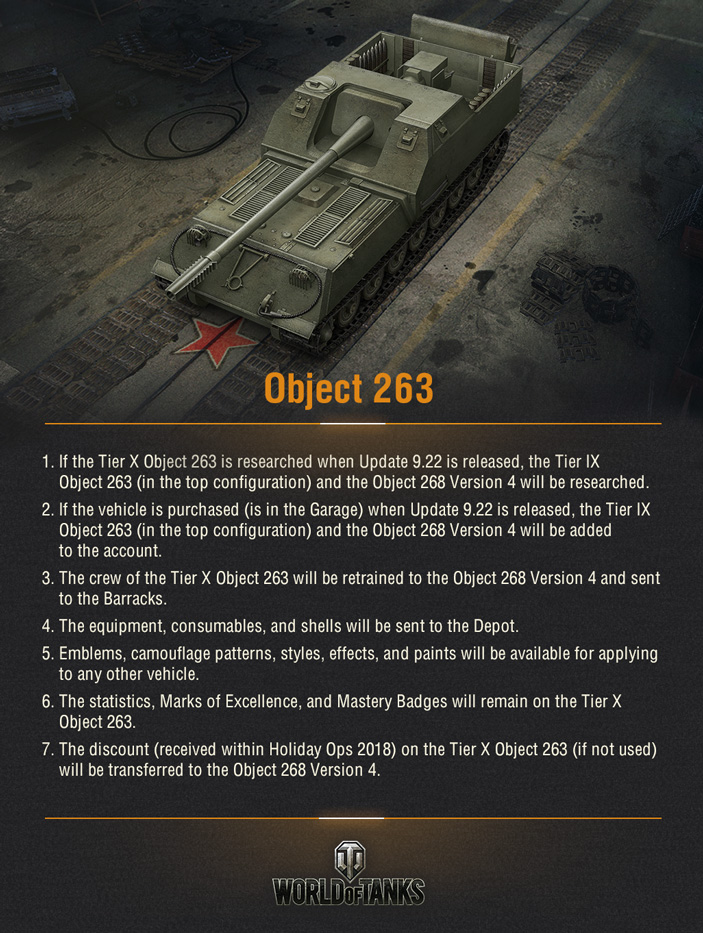 The last and probably trickiest task was tuning mid-tier vehicles for mid-to-close range assault gameplay. The SU-122-54 didn’t fit into the concept because of its traditional turret placement. We faced a huge dilemma here: it was clearly out of the line in terms of gameplay, but was valuable from a historical point of view. As an interim solution, we moved it down a tier to see if it can be viable there. Unfortunately, it was no good at blocking damage even at Tier VIII and still felt like a huge step away in terms of gameplay, plain and simple. That’s why, we removed the SU-122-54 and made a line fully composed of rear-turret/superstructure vehicles. 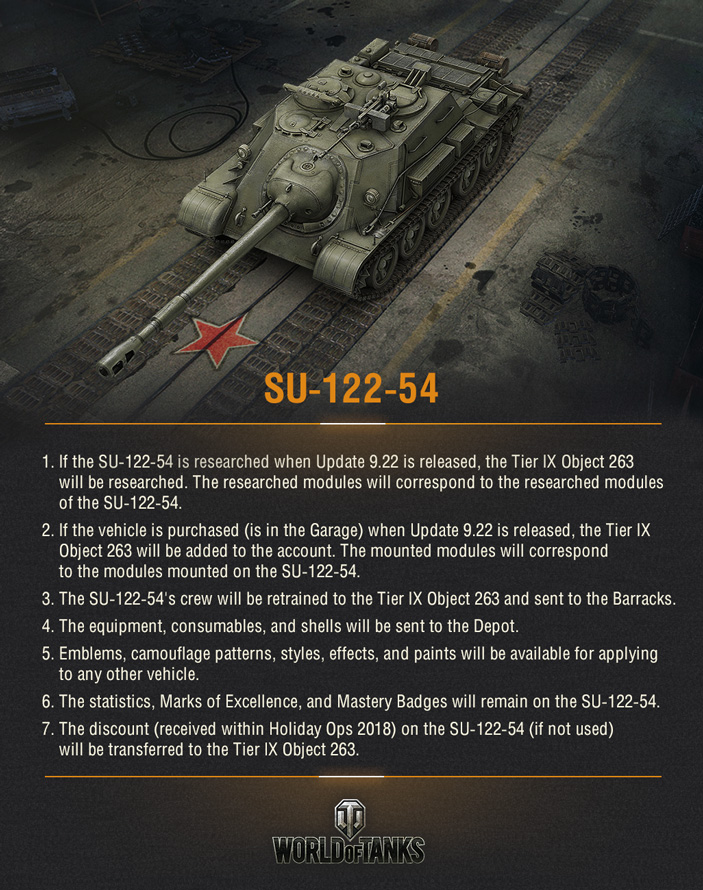 The second round of the supertest solidified our belief that the concept we designed for the line reshapes these TDs into a more desirable state, giving them a distinct character they lacked before. Well-armored, fast, and capable of dealing solid high alpha damage, they are meant to drive the breakthrough of flanks and should provide for an enjoyable experience. As of now, the latter assumption is largely based on the data from Supertests. We’re eager to get the TD line into your hands to test this hypothesis, define if further tweaks are needed, and drive to the best possible outcome together.