Skip to content
TDB Home » Winter Challenge 2021: Legend of the Hunter Get the AltProto AMX 30

From November 26 through December 6, you’ll have the opportunity to add a dangerous hunter from France to your tank collection. Fast and furious, it’s always one step ahead of its pursuers and never misses its prey. Join the event and get the brand-new AltProto AMX 30 for free or discounted – it’s up to you!

The Legend of the Hunter event consists of two Chapters: Tracking the Beast (Chapter I) and Priceless Trophy (Chapter II). Unlocking and completing Chapter II missions will grant you even more rewards, including the incredible Char de Chastel 3D style.

Chapter I – Tracking the Beast: How It Works

Your furious hunt for the brand-new AltProto AMX 30 will run for 10 days. To get this French beast, you need to complete 10 consecutive Stages by fulfilling missions for mastery or for commitment, all in Random Battles. You can track your progress via a special banner in the Garage without opening a separate Challenge tab.

Both sets of tasks can be fulfilled simultaneously, given that all conditions are met. The mission that is completed first will count towards your progress for the next task on either path: commitment or mastery. 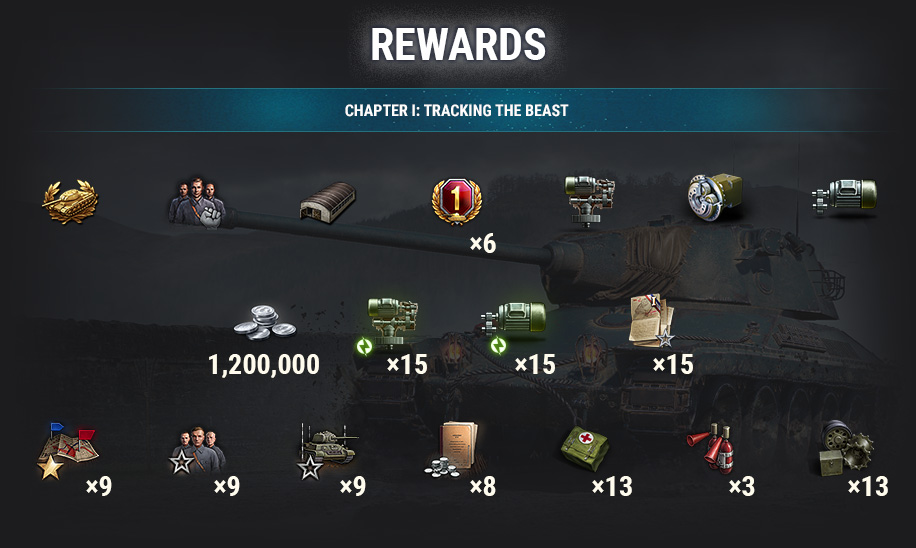 Whichever path you end up taking, each completed Stage will bring you a host of rewards, including tons of credits, Personal Reserves, days of WoT Premium Account, directives, and more.

In addition, each Stage knocks 10% off the final price of the AltProto AMX 30. If you complete all 10 Stages of Chapter I within the given timeframe, you will get this brand-new vehicle—with a Garage slot and its 100% trained crew with Brothers in Arms as a zero perk—for free!

Once you’re done with Chapter I or purchase the AltProto AMX 30 bundle, 10 additional daily Chapter II missions will become available to you. You can view the mission conditions and track your progress while completing them on a separate tab in the event’s interface.

Plus, each mission completed will provide you with a 12.5% discount* on the 3D style bundle, which means you can get it for free as soon as you complete any eight tasks of the Chapter. You can view the mission conditions and track your progress while completing tasks on a separate tab in the event’s interface.

*The total discount on the package with the 3D style and Personal Reserves cannot exceed 100%. In addition to this visual masterpiece, each mission in Chapter II will earn you valuable items: Personal Reserves, days of WoT Premium Account, and Crew Books.

How to Take the Easier Route

Can’t wait to take the formidable AltProto AMX 30 for a spin? Go straight to the Premium Shop and get the whole bundle, featuring all Chapter I mission rewards, as well as the vehicle itself. It will also give you instant access to the Chapter II missions with additional rewards and the incredible 3D style.

Fulfilling Chapter I Stages will provide you with discounts on the final price of the bundle—10% off for each Stage completed. For example, completing five out of 10 Stages will knock 50% off the price.

Purchasing the bundle gives you the full set of rewards and automatically marks all event missions as completed, so you won’t be able to access them once you have the bundle. It will be available starting from November 26 at 09:00 CET through December 6 at 09:00 CET (UTC+1), with a two-day “last call” period finishing on December 8 at 09:00 CET (UTC+1) for those who missed the deadline. The AltProto AMX 30 pack can be purchased for real money only.