World of Tanks Update 1.8 will bring a new set of regular Daily Missions for Random battles, these missions will replace Rewards for Merit.

The new system is easier to understand and makes it clear which rewards players will receive and what is required to get them. A new feature will also be introduced, the ability to re-roll the conditions of three Daily Missions, giving you flexibility in completing them.

Open the Daily Missions tab in your Garage to find three battle quests with increasing levels of difficulty (Tier I, Tier II and Tier III). You can complete all three missions simultaneously, and their conditions are displayed in the Missions tab. Mission conditions should be similar to the following examples:

Missions renew daily at the end of the game day, at 05:00 UTC, and you are allowed to complete no more than one mission of each type per day.

If a mission is not of your liking you can just re-roll one of your missions every 4 hours, to get a new mission from the same difficulty category.

You’ll get more and better rewards for completing harder missions, and you can check the rewards for each mission in your Garage at any time. You can get your hands on consumables, bonds, Free XP, credits, Crew Books or blueprint fragments. 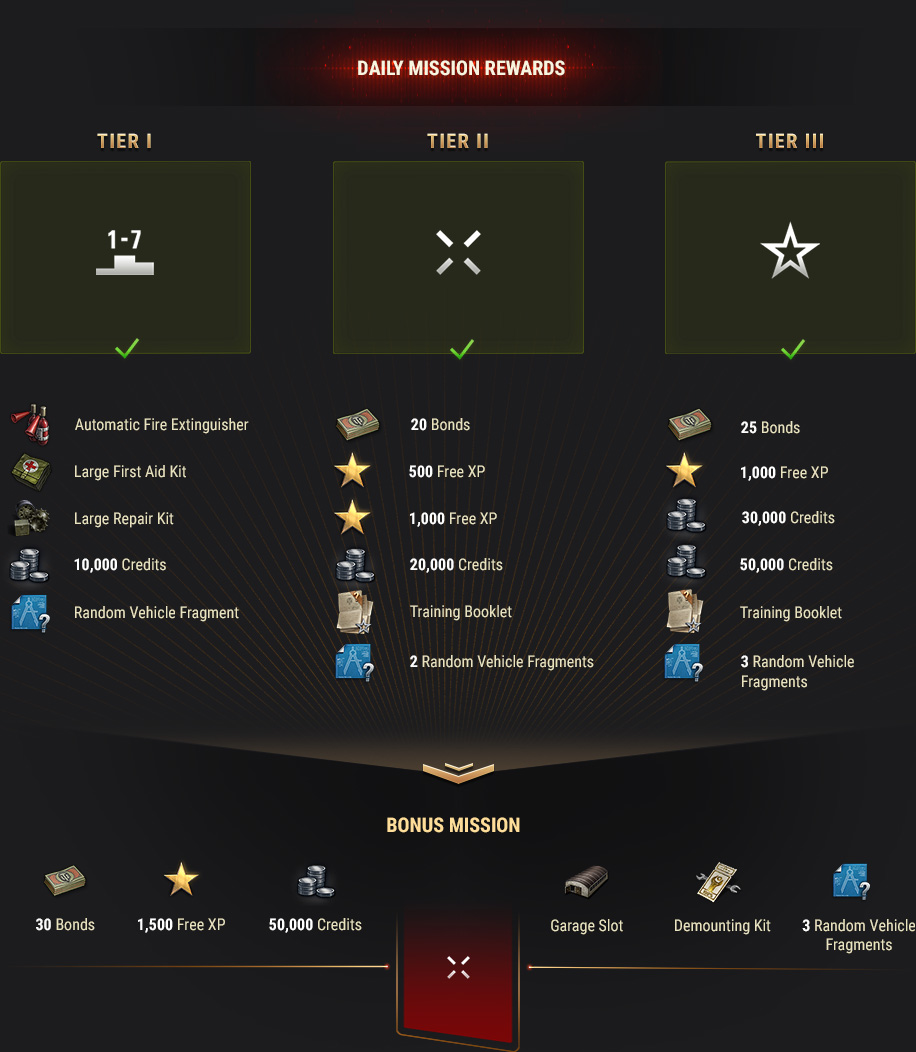 After completing all three regular missions, you’ll unlock a Bonus Mission with even better rewards, which may include:

To unlock a Bonus Mission, you need to complete one mission of each difficulty on the same day, no matter what day each of them was started on. The Bonus Mission becomes available as soon as you successfully complete all three missions.

As you complete Daily Missions, a special progress bar is filled. Each completed mission (including the Bonus Mission) earns you one point. Upon earning 45 points, you will receive 100 bonds and one of the following Epic Rewards:

Plus, players with a WoT Premium Account will receive an additional point for completing each of the three daily Premium Missions. Starting with Update 1.8, you can find them in the Daily Missions tab.

Daily Premium Missions don’t affect receiving the Bonus Mission but speed up your progress towards getting an Epic Reward.