Massive thanks to Garbad, who spend the time writing this helpful guide for everyone who is starting TotalWar: Arena. Don’t forget to leave your feedback in the comment section.

The purpose of this guide is to help noobs get started in the arena, specifically by learning how to use the commanders’ abilities, using correct units, and so forth.  It is intended to cover up to about tier 5 gameplay.

As a far warning, Arena has a deceptively harsh learning curve.  Although Total War or World of X vets should easily be able to pick up the controls and theme, most still lose – horribly – at first, even with good tactical play.  For example, when I first started, I was averaging about 220 kills per game (maybe in the top 5% on the server) yet was getting crushed, something like 42% win rate.  This is because I failed to realize the importance of commander and unit skills.  Learn from my mistakes and the lower tiers will be a lot less harsh!

Arena commanders are essential to your success.  Note that you level commanders independently from levelling your units.  Commanders level up with “free exp” and can be used with any unit (although certain commanders’ skills are much more useful with some units than others).  It’s important to use your free exp to level up your favourite commander’s abilities or else you will fall behind, even if you are using high tier units. 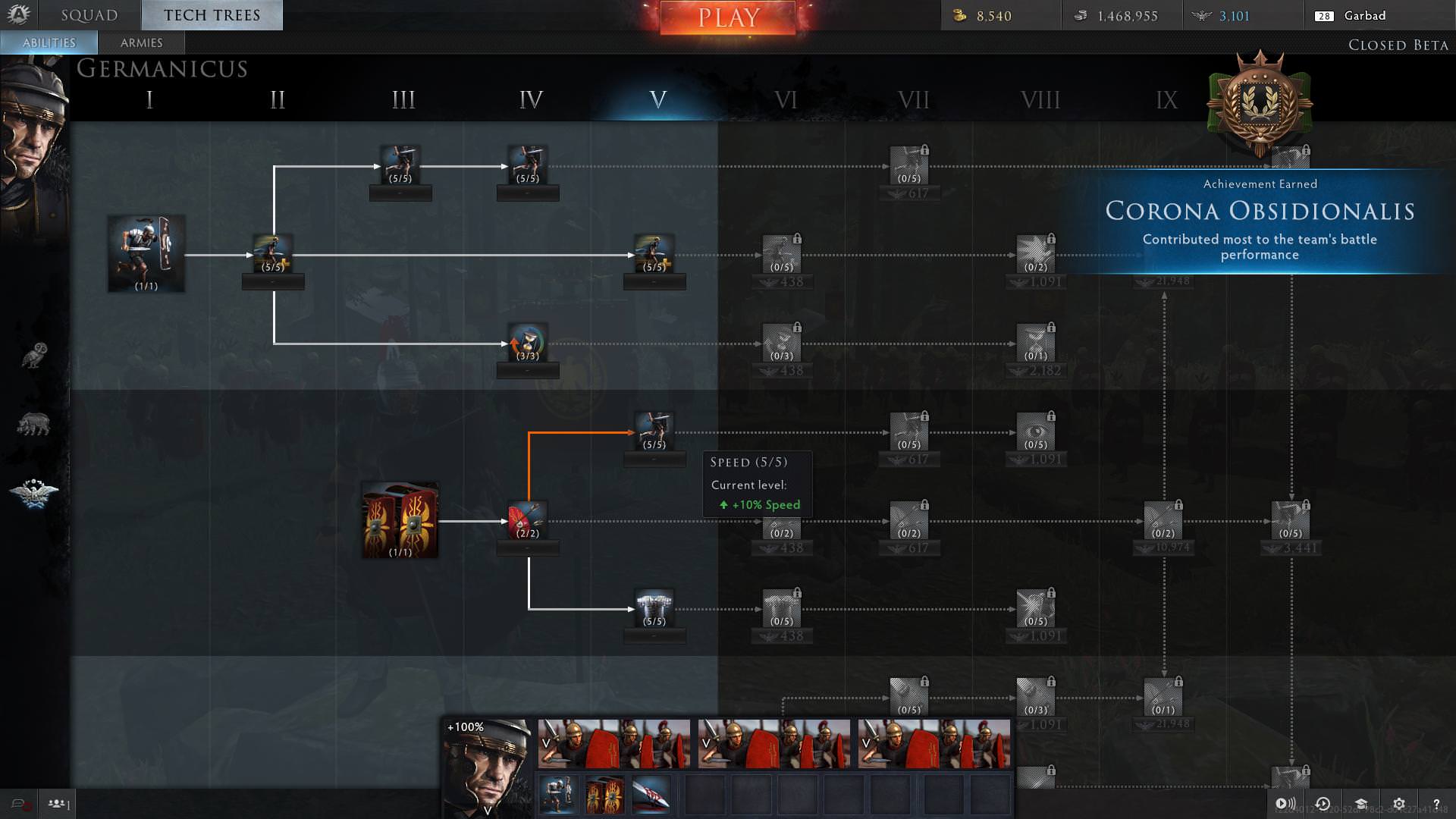 Note:  High-rank players can bring a level 10 commander into a game using a level 1 unit and have a massive advantage (more skills, better stats).  This is the reason why sometimes you see a level 2 unit kick the shit out of multiple tier 3s, etc.  Hopefully, Wargaming will address the seal clubbing problem by capping commander level at the unit level you are playing to keep the field level, but… Wargaming.

Germanicus is an extremely powerful commander, but he takes some time to become so.  Roman infantry is a bit underpowered in low tiers right now in my opinion, plus his skills need to be at least level 5 before they come into their own.  This leads a lot of players to think Germanicus is weak when nothing could be further from the truth.  Germanicus is a generalist infantry commander who is primarily useful as a basic defensive unit (bodyguard your archers/arty), slaughtering dogs, and who can generally hold your own against most opponents if you have numbers or a good flank.  You are most vulnerable to specialist infantry (pikes/spears head-on, falxes).

HEAVY INFANTRY CHARGE – HIC is a hard-hitting melee charge that can also be used as a mobility skill to help your slow units get about.  It’s a basic, useful skill.

TESTUDO – Unlike old RTW games, testudo does not give you immunity to missiles, it merely increases your block some.  At first, it’s not terribly strong (and it also does NOTHING if they fire on you from behind), but its very useful when you are trying to tank missiles.  Note the vision reduction – if you are spotting your archers, be sure you leave one unit able to see far.

VENGEANCE – Vengeance gives you a massive buff to melee stats that should give you a major edge on almost any melee opponent.  You will probably only get to use it once a game, so use it in a major clash to punch through a key battle!

It’s tempting to want to bring a velite, but Germanicus has no synergy with those units so its best not to.  Instead, use 3 melees to fix and flank, spread out and defend your allies, and overwhelm isolated or weak units.

Throw Pila: Roman swords get 2 javelins.  These are best used thrown at the back of a target (no blocking) but are useful to soften up an opponent.

Formed Combat: Formed combat rotates your units to the front and provides a good buff melee at the cost of speed.  It takes more space as well.  Its best used in any head to head fight, but leave it off for flanking manoeuvres.

Stakes are highly useful both as a defensive tool and as a sneaky offensive tool.  I will talk more about this on future Roman commanders, but they are too good not to use. 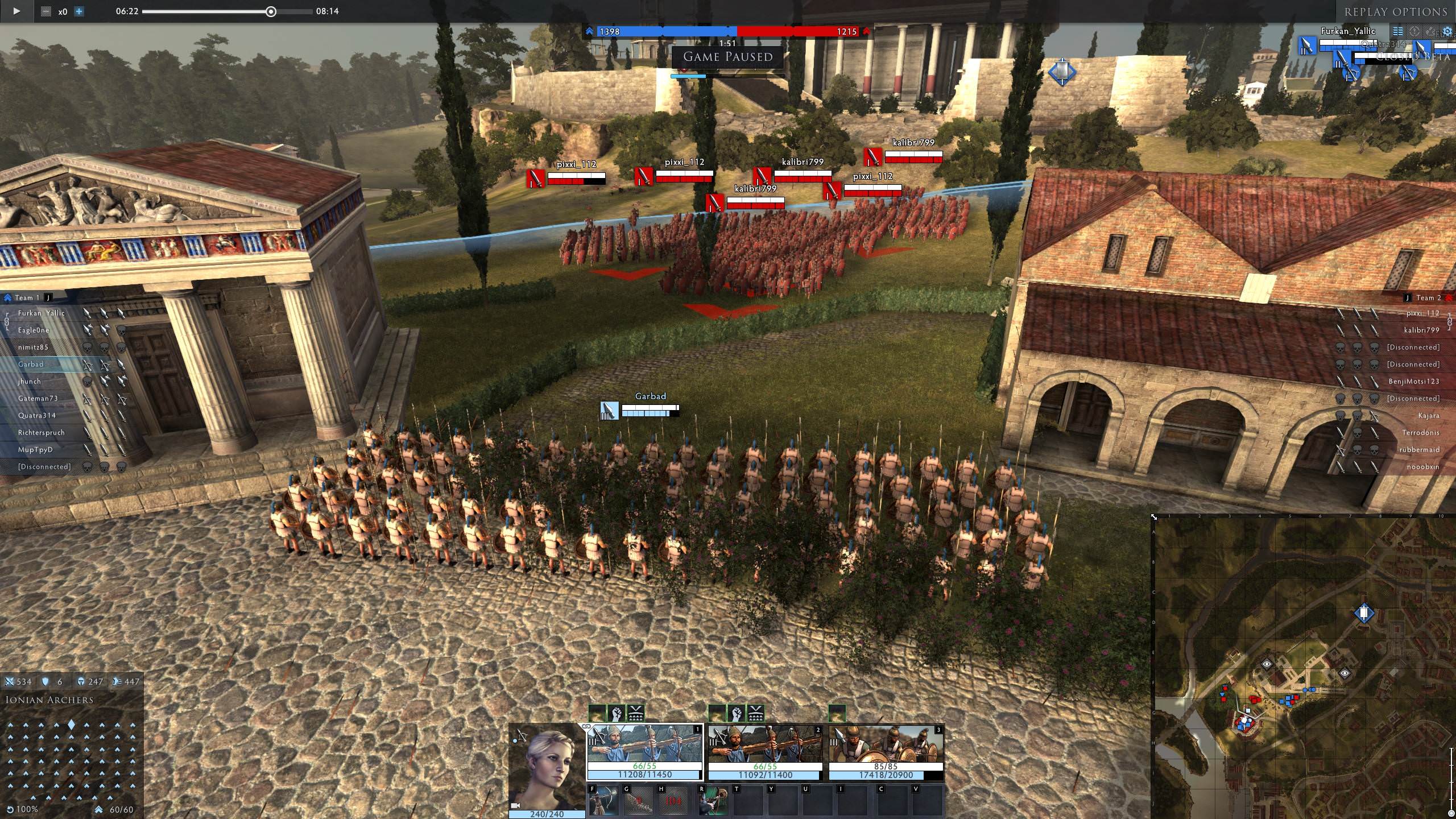 6v1 = easy roman victory right?  Nope.  My greeks slaughtered all 600 of them with few casualties.  NEVER attack a phalanx from the front.

Cynane is perhaps the best commander in the game.  She specializes in ranged attacks, hit and run tactics, and support fire.  Bows when well played are devastating to any opponent and Barrage makes her clearly the best missile commander.  She is particularly lethal in winning the ranged v. ranged duels that dictate who controls the map early game.  However, it’s easy to accidentally kill a lot of allies with friendly fire and sometimes noobs aren’t sure how to get shots and be productive.

RAPID ADVANCE – A basic speed/manoeuvrability skill which is always useful.

HUNT – Hunt is not terribly useful at first, but it can be helpful in archer v archer duels by keeping your opponent lit even if they try to hide in soft cover.

BARRAGE – Reduces reload by 80%+, enabling you to sometimes volley an opponent to death before they can react.  Best used against soft targets, especially other archers.

Cynane is an archer specialist and should never run anything else.  In low tier games or if you don’t trust your allies, sometimes its ok to run one unit of spearmen to help protect yourself from cavalry, but in general 3x archers is the strongest combination.  She is a serviceable javelin or slinger commander (or pike exploiter), but neither gets to use the peerless barrage skill so I recommend sticking with bows and letting other commanders use those units.

Focus Fire: FF targets a small circle and gives a small damage bonus, which is best used to avoid friendly fire (aim at the back of an engaged unit to reduce FF).

Rapid Shot: RS is a basic reload toggle, which doesn’t appear to stack with barrage.  Its got a short reload and is useful at any time.

Phalanx: All a Cynanae specialist needs to know about her spearman escort is that if they are in phalanx, they are virtually indestructible from the front, but will tire quickly.  Not in formation, they are just bad infantry (ie, fodder).  More will be said about them with spear focused commanders.

I prefer the small range buff (just enough to give me first shot against a base archer) and agility to dodge opponents volleys.  I also like broadhead arrow for the alpha.

Unlike the other two starting commanders, Arminius is not a clear-cut specialist.  Most people prefer to use him as a cavalry commander, but he is perfectly viable as an infantry commander as well.  His skills provide speed, charge attack, a berserker attack, and deception.

MOMENTUM – Momentum provides a nice overall agility/speed buff toggle that ends if you stand still.  It’s primarily useful for getting around the map in a hurry.

FRENZY – Frenzy gives a large buff to melee attack/damage at a huge penalty to melee defence.  Its useful against units you overmatch (such as meleeing cavalry v. Archers) or in attacks from the rear or against routing units.  Avoid using this in a head to head fight with anything that can fight back or you will haemorrhage damage!

INFILTRATION – This odd skill makes you appear to the on the other team (ie blue to them) while also buffing your speed and charge.  Only idiots will fall for the false flag, so this is basically another speed buff that sometimes surprises people.  It’s best used in forest combat.

Arminius is all about speed.  You need to avoid head to head or prolonged combat with any unit and focus on hitting soft targets (archers, peltasts, arty) or surprise/blob attacks from the rear.  It’s tempting to play in forests, but the limited view range cuts both ways – you can just as easily stumble into a frontal engagement against Germanicus that rips you apart as ambush an unsuspecting pikeman with his back to you.

CHARGE: This is a basic charge to run down the enemy.  Note you cannot turn during the charge, so be sure you don’t get dodged.

Mount Kick: This fantastic skill knocks down and damages opponents in melee.  It can be used both defensively (KD them then extract) or offensively (KD and trample them).

Harass: This is a basic charge/mobility attack.

Throw Pila: Similar to the Roman version, but with 3 javs.

Charge and speed, what more can a savage want?

So which is best?  That really depends on what you want to do.  I suggest noobs try out lots of unit types as a low tier and see which type fits their style most.  Once you know which unit you want to play, pick the commander that gives the best skills for that type.  For example, if you prefer missile units you might pick Cynanae with three archers or Leonidas with 2 slingers and one pikeman.  Each of those gives good synergy with what you want to do.  A poor choice would be something like Germanicus using cavalry, as none of his skills works with cav.

Hope you enjoy, and please let me know if this was helpful for you.

15,466 thoughts on “TotalWar Arena: Garbad’s Guide to the ARENA Commanders – Part I”